The Parent From Hell. 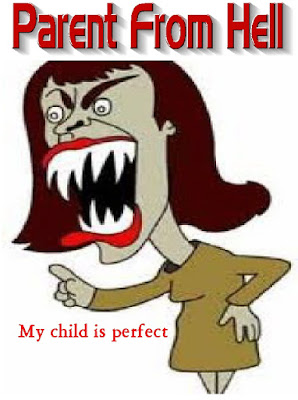 In every class you always have a parent or two who believes their child walks on water when they can't even swim!   However, what's even worse, there is always the parent from hell who believes their child is perfect and deserves high scores when the reality is the student's work is mediocre at best.   That is the case today as I was pulled out of my grading assignment to document the grade I gave a child.

The grade I gave the child was based upon four different factors, tests, labs, assignments, and participation.  When I added up the entire package the final grade was a touch below what I gave the student, so I rounded up the grade to the higher value.  I didn't penalize the student for missing days or arriving late to school, which I should have done.  Finally, on the days the student didn't show up to my class, the student could come in the next day and pick up and make up the assignment.  The same goes for the student's missing labs.

Naturally, the student never bothered to make up the missing labs or take the previous assignments.to do Therefore, the blame was placed not upon the student, who's failure to make up the assigned work but was placed squarely on me by the parent since I didn't inform the parent of every assignment she did not complete.  Moreover, I failed to have an online grading book so the parent could closely follow on the internet her child's progress.  I also was at fault for not getting back to the parent about the student;s grade, despite the fact I had not calculated the grade at the time since I was still marking labs and did not finish grading the last test given that day.

Reading this you would think I failed the student?  The grade the student received was a "B" average and I was being generous!  Unfortunately,   for some reason this parent believes her student is an "A" student and her grade would have been higher, except its because I'm a lousy teacher and I don't appreciate the student. The parent of course,  ignores the six days that her child missed my class in the last two months or the problematic behavior her child exhibits far too many times as well as the student's lack of focus.

I would like to say the school administration had my back but I spent the entire morning being made to justify my grade for the student and being threatened with going to the Superintendent's Office to micromanage my grading policy and organization.  Having my back?  It felt like I was being stabbed in the back!  I felt quite disrespected and people want to know why there is a looming teacher shortage?

In the next semester, to protect myself from both the school administration and helicopter parents, including  the parent from hell, I will make every effort to document everything daily but I will not use an online grading book and have big brother watching my every entry. Furthermore,  I never use an online grading book until and unless the union contract requires it.  To me that is too much work and I have a life after school even if other people don't think I should..
Posted by Chaz at 4:53 PM

As an elementary teacher in the Bronx, I gotta say that I don't see too many parents from Hell. Parents of the most difficult students do not even have a working phone to reach them at. I have even experienced parents who write fake phone numbers on their child's emergency cards so teachers can't get in touch with them for behavior issues. Oh yeah, I am NOT making this up.

So sorry. These parents are not only hurting you but they are hurting their child, giving her a false sense of entitlement. She will believe she can go through life by getting what she wants through intimidation.

I hate to state the obvious - you're better off in the ATR pool, but you know that. They won't hire you permanently, no matter how hard you work. I hope they do, as I know you're an excellent teacher.

I know what you mean. One parent wrote on a card;'In case of emergency, call 711."

1. At my school we are required to use an online grade book.
2. We have to submit our grades to the principal electronically before we enter them in "Stars."
3. ANY teacher who 'holds the students accountable' as the admins say to us, gets a big target on their back, punitive observations and grief until they either pass everyone or leave the school.
4. We are required to maintain a huge paper trail for students who we wish to give failing grades to.
5. School policy is that no student can be failed for lack of homework.
6. The smart teachers pass everyone except the long term absences. These are the teachers who are left alone and get good reviews.

Before you cry about 'holding the students to standards' and 'we're teachers and should be dedicated to the pursuit of truth and excellence,' --- stop right there. I agree with you, but that world where those thoughts were valid has passed away. We mostly have low IQ students now from our urban ghettoes to every godforsaken corner of the globe.

Western civilization is on its last legs. All you can do is survive now in this pre-apocalyptic world we now inhabit where logic and truth are turned on their heads at every turn.

Chaz, we have all experienced these type of parents but usually the adnin has your back.

They do not want to hire ATRs, get that in your heads.

That does not happen anymore.

My principal requires all teachers to post their homework assignments on Skedula/Pupilpath daily. She also requires all teachers to post test scores within 48 hours of administering an exam. Homework grades must be posted on Skedula daily! This is an incredible amount of work, like you said. Several teachers tried to battle the principal and refused to comply with her directive, including 15+ year veterans. The result? Letters in file for insubordination and MANY pop-ins. The principal sicced her AP's on these teachers to make their lives miserable until they complied. It worked!

The excuse of "the union doesn't require it" will not work. You even had a post a while back which stated the UFT's views on such principal demands. Your post taught us that the UFT view is "well, if the contract DOES NOT state you DO NOT need to do something, then you HAVE to do it!" This is exactly why a teacher cannot win the battle of online grading.

Meaning, until the contract explicitly states "teachers are NOT to use online grading tools", teachers must comply and use them, or face the wrath of angry admins. As an appointed teacher, it is simply not worth battling the principal. Don't you agree?

Great post from anonymous 4:27
Chaz, I've been in many similar situations, with Skedula updated weekly and accesible to all. Somehow no one seems to know the student will either fail/or not get an A+ and even with the proof of Skedula you are left retelling the same warnings you had told at the first parent teacher conference in October, no one, parents, administrator, student, ever remembers.

This is not a large percentage of the cases, the vast majority of parents/guardians don't care to communicate with the teacher

I don't know if many are aware of it but Deven Black, a fellow blogger and ATR in the Bronx was killed and nearly decapitated in a city shelter last night. R.I.P.

I am required to keep an online grade book. I don't have to show all my grades to parents and students, but I do. Admin is the opposite of supportive. I've been keeping a log of my hours working on data driven instruction and their other knee jerk demands for paper work, supposedly required by parents. I've put in about 60 hours this week with triple deadlines of grades due (Principal told parents kids were able to submit work up to and including the day grades were due), data analysis for next Unit Plan, and syllabi for Spring Semester all due.
I'm interested in what the UFT is doing on this issue. Does anyone know?

Dwarka is an evil skank.

Mr.Black was a suspended ATR, whose wife filed for divorce. He had no where to go and no money.

My God, that's tragic. A microcosm of the ATR conumdrum.