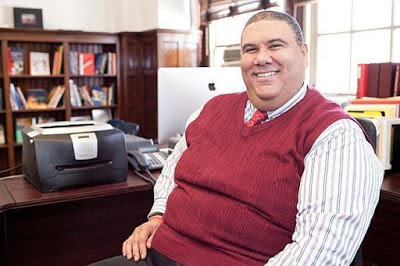 In today's News York Post, embattled Principal Santiago Taveras of Dewitt Clinton High School in the Bronx has officially lost his position as Principal due to academic misconduct but will still earn $149,826 as an academic support specialist at the DOE's Bronx field office.  If Mr. Taveras was a staff member, he would have been charged under 3020-a and the DOE would ask for termination.  Another case of the DOE's "Double Standard"when disciplining administrators for misconduct.

Santiago Taveras has been accused by a school source in his SCI report of changing grades of up to 900 students, from failing to passing, without the approval of his teachers.  Apparently, SCI only reviewed four cases from the accusation and dumped the rest back into the DOE's lap who did not confirm or deny the accusation.  However, they did remove Mr. Taveras as Principal so there apparently is some credence to the accusation.   The SCI report did substantiate the four cases of grade fixing and recommended the following:

“very serious.” He recommended that “appropriate and significant disciplinary action be taken against Mr. Taveras, and that he be advised that similar administrative failures on his part, in the future, may lead to suspension or termination of employment with the D.O.E.”

Mr Taveras has been involved in other unseemly actions. He was the point person in closing many of the large comprehensive high schools as Deputy Chancellor under Michael Bloomberg,  Next, as Principal of DeWitt Clinton High School he built a personal shower that the DOE first found to be appropriate than under media scrutiny, quietly had the shower dismantled and removed.

Finally,  Mr, Taveras targeted teachers, especially veteran teachers,. during his time as Principal at DeWitt Clinton.  He was known to harass teachers and gave 8% of his teacher "ineffective".  Compared to the 1% ineffective grade citywide.

In defense of the DOE. If they were to remove all the corrupt principals there wouldn't be enough left to run the schools. Grade changing and over the top grade accumulation has been in every school and borough I worked in.

Somebody pleaaase check out my principal, Namita Dwarka from Bryant HS, Queens NY.

4:20 that's kind of a silly argument to make. The idea "should be" to remove a proven corrupt leader with somebody that you hope does not turn out to be corrupt instead of sitting back too afraid to do anything because of the status quo.

Santi targeted all veteran teachers as principal of Clinton. They were constantly harassed by his illiterate AP. He surrounded himself with like-minded Dominican robots. This is a prime example of why Farina must go with mayoral control of schools in June. Can Mulgrew still defend Farina, after one nightmare principal after another gets away outrageous behavior against staff and students?
Hey Sue Edleman, here's another whopper for you that the DOE is trying to keep quiet: LaBoy-Wilson is back in Rincon HS, after the UFT told the staff to individually write up illegal and questionable actions by her. They told the staff there was less than a one in a million chance she would be placed back in Rincon. Those teachers will be targeted and terminated, guaranteed. She's done that to whistle blowers for years. Santi is a saint compared to LaBoy-Wilson.

She is untouchable. Fariña loves her, and the Queens UFT office loves her.

Tavares, Hill, Jahoda, whatever the Rockaway principal's name is, Dwarka, Kwait, the list goes on and on. It's not like the stories haven't been told, it's more that these folks are doing what they're told. It's all about firing teachers, and lowering pension responsibilities. Just look at the millions spent on consultants and "coaches", so much money that can be used in the actual classroom and they are not interested. Anyone want to bet who gets the job at Townsend Harris.

The Taveras scandal does not stop with Taveras. It goes much higher, all the way to the top because this sleazeball has not been arrested or charged with breaking N.Y. EDN. LAW § 225: NY Code-Section 225 regarding "unlawful acts in respect to examinations and records: A person who shall:9-a. Knowingly and willfully make an unauthorized and false alteration or representation of any grade, credit, honor, award or standing in the permanent record or transcript of any student with respect to a school or college under the supervision of the regents, the commissioner, or the university of the state of New York."

If Chancellor Carmen Farina and Special Commissioner Richard Condon were not corrupt themselves, they would recommend prosecution. But for years both have covered up endemic cheating in our schools while Governors, Attorneys General, Mayors, the City Council Education Committee, and now State Education Commissioner Maryellen Elia along with her paralyzed head of test security Tina Sciocchetti, not to mention UFT Presidents Weingarten and Mulgrew, have willfully closed their eyes to our Atlanta-style fake grades and graduation rates.

Who am I to make such outrageous allegations? A former investigative reporter, fifteen-year high school teacher, and unchallenged author of a 77,000-word mandated corruption report indicting Farina, Condon, et al., which I turned in to the Department of Investigation in 2014. Refusing to recuse himself from obvious conflict of interest,DOI General Counsel Michael Siller told me to get lost in a shocking two-sentence reply dated Nov. 5, 2014: "The Department of Investigation is fully prepared to conduct, where warranted, investigations of its own personnel, including high-level ones.  In this case, however, DOI has determined not to take action on your complaint."

There is little consolation in the fact that Siller left Farina, Condon, et al. twisting in the wind of my morally certain accusations,that is, not a word in their defense. QED


crimes against an reported and o.

No matter what she will remain the queen above all laws. If you oppose her she will make you an incompetent ATR. Pass those students and make her look good.

"D. Students’ Grades
The teacher’s judgment in grading students is to be respected; therefore if the
principal changes a student’s grade in any subject for a grading period, the principal shall
notify the teacher of the reason for the change in writing."

I have also had grades changed without notification. It is infuriating!

Phillip Nobile- Can i Interview you

You should. It is time to expose corruption.

Dwarka will make you into a prisoner. What a disgrace. UFT is the biggest joke and they have no shame in looking completely in cahoots with the DOE. What has the world come to?

Sounds like no one in the doe, uft, mayor's office, or the gov office gives a d^*# about NYC students or the folks who bust their a^* teaching them. We can vent all day but the venting remains contained within the confines of several blogs. I'm scared to do anything alone but will join a group in a minute.

I had a principal give a student a passing grade in one of my classes. Mind you, the student showed up 1-2 times the ENTIRE semester, but he needed my class to graduate. I didn't say anything when I was told that the principal wanted to change it. He was already targeting me because I was a white male, and he hated white men with a passion. I transferred to another school where the admins also hate white males, but it is a renewal school so beggars can't be choosers.

It sounds like they are doing the old roky doke on the parents and students of nyc. If this is true, I guess we are preparing students to be the service workers in the coming years.

What can be done?

It would be very beneficial if a committee were formed to review and analyze the investigative reports and referral letters which are being issued by the Special Commissioner of Investigation's Office (SCI).

Elyse Hirschorn is the Records Access Officer of the NYC Department of Investigation (DOI).

DOI receives copies of all of the investigative reports and referral letters issued by SCI.

My recommendation is to file a New York Freedom of Information Law (FOIL) request for several years' worth of such records and to renew it monthly for the records which came into existence during the previous month.

If my interpretation of the Lewis v. Giuliani judicial decision is correct, then substantial portions of such records are available when either wrongdoing or a violation was determined or when a recommendation was made for governmental action unless some specific FOIL exemption would warrant nondisclosure.

Now corruption and fraud are acceptable.

A little fraud here and there, the graduation rate goes up.

Veteran teachers are unwanted, so they make them incompetent and then ATRs.

I have less than 7 years left before early retirement and the regaining of my sanity. I have never been rated less than effective for the year (thank you MOSL for counter-acting the negative ratings of vindictive admins!).

However, in the current climate, and seeing how this year the admins in my school are tossing around 1,s and 2's like they're candy, I wonder if I will make it before being canned! I keep hearing about how tenure means nothing anymore. This is how so many teachers feel now about our jobs. We are demoralized in the face of unfair blame for all of society's ills.

How can the social justice warrior DOE not see the oppression they commit right in front of their faces? Why do they appoint outright bullies and incompetent 'managers?'

What is with Hispanic Mob of Superintendents, Principals and other DOE criminals? No wonder we are dealing with third world country educational system in NYC.

Go and work for Dwarka. She would like to get rid of you.

Wait for Fariña to leave.

As an Hispanic teacher with 30 years experience I take offense with your comment of " Hispanic mob of superintendents " and third world country ed system. There is no room for comments like these.

If you are rated incompetent, you will be terminated under the teacher evaluation system, not an ATR.

5:20 how about you take your 30 years experience salary and support families of unjustly terminated teachers or pay medical bills for those who lost they well being do to oppressed working conditions by DOE Hispanic MOB, then you can take offense to that comment.

Fariña, please retire and take with yoy all the corrupt principals. Mulgrew retire also, we know you are fake.