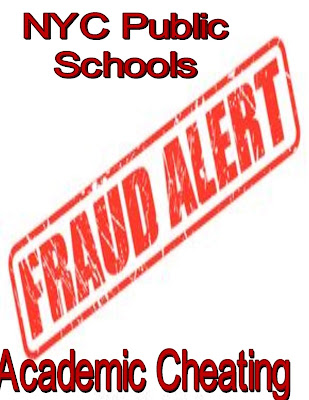 I have written previously that academic fraud is quite common in the New York City public school system.  Be it bogus credit recovery, scholarship, changing grades, or administrative pressure, academic fraud is ignored by the DOE.

In today's New York Post there is an article dealing with the academic fraud issue and the newspaper brings up one example that shows how OSI substantiated the test cheating but since the teacher was a favorite of the Principal and Superintendent, instead of the DOE filing 3020-a charges, the teacher merely ended up with a counseling memo.

Apparently the New York Post will be covering the academic fraud issue this week,  I can only laugh that the  newspaper never addressed the issue under Bloomberg or read Susan Edelman's articles most every Sunday.  The funnest quote from today's article is by a DOE spokesman who said the following.

“We treat academic misconduct seriously and take immediate disciplinary action as necessary. We have created an academic integrity task force to enhance training and support to ensure our policies are followed,” said department spokesman Doug Cohen.

The DOE claims that they have zero tolerance for academic misconduct and that is probably true for most teachers but when it comes to administrators and their favorite teachers, the DOE seems to look the other way.  The double standard continues no matter who the Chancellor is. Here are two other examples.  Here and Here.
Posted by Chaz at 1:03 PM

The entire DOE (vs. Board of Ed) since Joel Klein and Mike Bloomberg is entirely based on phony statistics.

Is it any surprise some teachers do this when 50% of the MOSL rating depends on the student performance? I do wonder though why teachers are proctoring their own students; I thought that was a no-no and ought to come down on admin as well. (Perhaps that's why the principal of the subject in the article wanted to keep it hush-hush).

Even if the exams are proctored to a T, the "cut scores" developed by the State ensure that anyone with a pulse can "pass" with at least a 2 out of 4. In HS, 26 points out of 86 gives you a "65". Then there are the absurd class percentages, only 25% of the grade can be tests, so of course everyone passes, and the graduation rate zooms up.

These teachers may have committed fraud, but OSI and SCI are so pathetically incompetent that a team of trained monkeys could conduct a better investigation than they do. You really can't take anything they say at face value. It's no wonder their testimony always falls apart under cross examination because they only do the bare minimum to ensure the teacher is removed from the school.

Keep in mind, the entire disciplinary branch of the DOE is made up of flunkies and rejects who couldn't cut it anywhere else. The lawyers who failed as DAs end up trying 3020a cases. The clowns who couldn't make it as cops end up at OSI. The teachers in the article may have committed serious misconduct, but I sure as hell wouldn't rely on the buffoons at OSI as the gospel to prove the point!

It is anazing how draud disappears from the map when they investigated Principal Dwarka. What a sham that the schools has bexome under her lack of leadership?

Doesn't the inflation of grades inflate teachers overall rating? Are we benefiting too?

Not at all. The only grade that matters is on a state test

Do you mean ela and regents?

My school has students who were no shows all term now doing packets so they can graduate next week.

I notice also that many schools do not require proctors to collect cell phones. You are supposed to get baggies and index cards and collect the phones. It takes too much time though and there is a liability in taking their phones. I notice students using cell phones in the hallways and probably in the bathrooms. I think secretly most schools want the students to cheat so they will pass the Regents. It's a shame though for the students who try their hardest and fail and others pass by cheating. It just seems like nobody really cares about testing and integrity in testing.

You should report it to SCI and call Susan Edelman at the New York Post.

SCI only goes after teachers.

Rampant use of cellphones during Regents. kids were all openly sharing their answers on their phones at the bathroom at Kennedy. Different schools on same floor sharing and had students coming together in unity to cheat. Who said kids from different schools can't get along? Only in NYC folks. Thing is even with cheating they still fail. If you stood over them and gave them the answers they would still screw it up. The only way to insure they pass is to actually change the answers yourself, which is what many teachers do. No one cares.

True, SCI gets all cases and send it to OSI when they decide there is no sexual, financial, or criminal applications.

The investigators only investigate cases to get rid of ecperienced teachers.

They don’t think of it as cheating. Just a logical extension of all the absurd group work that has been passing for education the past 15 years

All investigations against fraud is swept under the table.

With twenty years in the system, the single most curious observation I've made is this:

Students that cheat, often cheat off others that have proven themselves to be chronic failures!

Is it cheating or are they doing this to save their jobs and careers? The whole system is one big joke. It has been encouraging cheating since Bloomberg/Klein days. Carmen helped cheating go further and further. I just made 4k proctoring the last few days. I am currently ranked as the TOP proctor in Manhattan with over 90 percent passing Regents rate. I am currently booked until 2021 but have availability in June 2022 but not before. Please contact my admin assistant for all future bookings. For 500 roses I can get you 75 percent passing, for 1000 roses I can get you 85 percent and for 1500 you will have 90 plus passing guaranteed.

Grade inflation benefits the principal and DOE. That's the primary purpose. As a consequence, teachers benefit due to the ratings of their classes. Make no mistake - grade inflation is due to pressure to show that students are doing well.

Teachers should NEVER change answers or tell students answers. This is a career ender. Not worth it at all.

You should see the hoops we are going through right now to get kids to pass who do not deserve it all.

If the teachers were still respected and allowed to make decisions based on their expertise, this would not be happening.

But now it is all about the 'numbers' for your school. The admins will lean on you to pass every warm body regardless.

All of this so the mayor can say, "Graduation rates are up - reelect me!"

We need to give the Mayor a 100 percent graduation rate. We should pass every single student. This is the only was people will wake up to "WHAT the F is going on?"

"Pass em ALL" is my third book I just finished publishing. Look for it. My second book "Suspend em ALL" was a best seller. My first book "I am a moron" did not sell more than 1200 copies. All my books are on Famis and Shopdoe.

I tried to prevent cheating on classroom multiple-choice tests by handing out four different, yet equivalent, versions.

At the end of the period, on a day where I had returned marked test papers, a student came up, holding two test papers, and shouted at me, “You made a mistake! You marked my paper wrong! You gave me a 4, and you gave her a 92. But we both had the exact same answers!!!”

I said, “Maybe I did make a mistake. If I did, I’ll apologize and will mark your paper again. Let me see both papers.”

The student handed over both papers. I pretended to scrutinize both of them carefully, and said, “Yes, you both had the same answers, but you didn’t have the same questions!”

The student grabbed the two test papers from me, said, “Oh!”, and then left the room.

It's a pathetic, toxic system that breeds incompetence, lies and deceit. It's all about the ratings. The DOE does not care if schools are understaffed to confront the issues students have. Blame the teacher when the child is not learning. Students graduate with a sense of entitlement. The entitlement is over in regards to grades in college. The DOE and its tactics are not doing students and their families any favors. Remember the days you had to earn your grade by going to class on time, doing classwork, doing homework and STUDYING. There are so many societal issues that passing the student for mediocre work has become the norm.

A Chairman stops a high school teacher in the hall.

CHAIRMAN: You’re passing too many kids. The kids know that if they come to your class and don’t give you a hard time, you’re going to pass them.

TEACHER: So, what do you want me to do?

CHAIRMAN: Nothing different. The principal loves you.

This does not only happen in NYC schools but in Rockland Country also!!