The ATR Pool Attacked Once Again. This Time By The Citizen's Budget Commission. 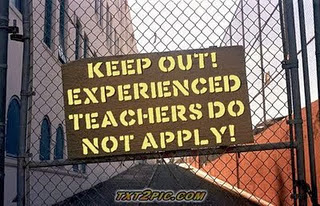 The nonpartisan and anti-teacher Citizen's Budget Commission (CBC) in an error filed analysis blasted the City and the UFT that allows teachers to remain in the ATR pool indefinitely.  According to the CBC report, the ATR pool costs the DOE $136 million dollars in the school year   Their solution?  Give the ATRs a six month time limit. While I do not question the number, I do question the CBC's motives and their lack of exploring the real cause of the ATR pool..

In the next few months the City will be negotiating with the unions, including the UFT.  The City will most certainly ask for an ATR time limit as they have done since the creation oif the ATR pool.  Just as certain, the UFT will reject an ATR time limit, reminding the City of the deal that was made between DOE's Chancellor Joel Klein and UFT President, Randi Weingarten that allowed principals to hire whom they pleased while excessing veteran teachers into the ATR pool.  Part of the sleazy DOE-UFT agreement was that there would not be a time limit for excessed teachers who enter the ATR pool.  From the day the infamous 2005 contract was signed, Chancellor Joel Klein has tried to get the UFT to agree to an ATR time limit and has pushed the media to write articles that condemn the ATR pool.  From the Liberal New York Times to the Reformy Chalkbeat, to the Conservative Wall Street Journal and New York Post, all the media demonizes the ATR pool.

Since Joel Klein left the DOE the three other Chancellors have also pushed fir a time limit and to the union's credit, they point out that the time limit is non-negotiable since it was part of the new hiring process agreed to by both parties in 2005.  Moreover, if the union was to accept an ATR time limit, the other municipal unions would loudly object and probably sue as a violation of the Civil Service law since it would set a slippery slope of diminished worker "due process"  as all unions under "collective bargaining" would be forced to accept having excessed members who no longer can bump less senior members out of their job and with an arbitrary time limit can be fired.

The CBC's report fails to discuss the real culprit of the ATR pool,which is Fair Student Funding that penalizes principals who hire veteran teachers and incentivizes schools to "hire the cheapest and not the best teachers" for their school.  It's too bad that the CBC report failed to address the deeper issues like school based fair student funding, large class sizes, poor leadership, and tight school budgets as the real causes of academic underachievement.
Posted by Chaz at 12:19 AM

Our union may have pushed for no time limits, but they ignore the fact that ATRs are being targeted and harassed, that 3020A proceedings have skyrocketed ....they deserve no credit, or my dues, at at all.

The infamous 2005 contract is when Bloomberg and Klein patted our young drunk lad, Randi from the wine gardens, on his head. I saw that and I knew we were doomed. Our boy was no man when it came to negotiating with real men. He was a screamer and yeller with failed law career but not smart or maybe he was smart and personally took a side deal making him a millionaire.

On the other hand, just finished out the school year being a dean while the union is grieving on my behalf. Even though my principal reads this I must say being a dean was not that bad. I actually started enjoying dealing with students again. I am even seeing the good, the honesty and youth in them. I'd say 99.9 percent of them are nice kids who stick to word unlike adults in the system. For example, I told them "the house" makes 10 percent off the top on any gambling that takes place inside the building. Would you believe they'd deliver the house fees every week without me asking for it? Mind you I am not sure they know what 10 percent really means but it is a start and they make me proud of being an educator.

On a sad note, I think we should take a moment of silence for Gary Bernstein, maybe the greatest teachers in the last 14 years. Gary was an amazing highly effective teacher who was well-known for his bulletin boards. I have never seen a bulletin board ever as good as Gary's. When I was being u-rated by the young moron AP (when I was under Sup Fred Walsh) - I was told to go and watch Gary teach in the BX. Gary was a very nice guy, humble and extremely bright. Gary told me "to forget content, instruction and anything else you know. Concentrate on the bulletin board. The bulletin board is where it is all at."

shady you make us all proud,
the way you stand up to and laugh at the doe system.

I honestly believe that if it weren't for the backlash that would occur from other unions, that ATR's would have been sold out already. The UFT is useless. They can't even get us CTLE credits included in our Monday PD hours that we are forced to stay for. I might just opt out and use that $1400 to pay for those 100 hours.

Chalkbeat did a hit piece too. Hunting season has officially begun! The lies will fly like arrows, while Mulgrew closes his eyes. -Atlas

I cannot stand my admins.
They are mean, vindictive and treat us all like children and first year teachers.
They are disorganized to boot so our school is always in a state of chaos.

Danielson's is the worst because in the hands of a vindictive AP it can be a tool to ruin you, no matter how good you are.

That is what our Union wants chaos and nonsense.

The disorganization is part of the game plan. The goal IS for the school to be disorganized and therefore a hellhole. This is no accident.
I could have written your post. A 100 of us could have written it. It's system wide. They are teaching these tactics at the principals work shops. That's why it sounds like a broken record.
Keep good anecdotals ( I use s marble notebook almost daily) And please learn how to get comfortable recording. It may save your job one day.
By the way, iPhone has a good recorder and it works through your pocketbook.

3020A and Field Supervisors is a way of discriminating ATRs and it is plain discrimination.

This ATR bashing has been going on for a decade now. Right after coke bottle glasses Joel Klein lied to the press, (Klein is the one who started the bashing of ATRs) the ATR scandal has quite possibly become the biggest scam/blunder ever known to american business/schools.

I mean where else in any organization, do you see people getting paid huge amounts of money to sit around and not work in the system? Most of them are hurting to get their positions back. These are people are highly educated mine you. They are people with masters degrees, second masters degrees, some ATRs who came from businesses are lawyers, some were high level managers, some are engineers, some have been CEOs of their former companies.

Yet, because ten years ago Joel Klein decided to bash these professionals the stigma has stuck for years and years - also the press does not research anything as we have discovered so the stories keeps popping up each year. Fake news has become the norm in this third world country we call America. A true rich advanced society/country would not have ATRs such as the ones mentioned here being bashed and humiliated such as they seem to be treated here in the NYCDOE mad house. In a third world mentality you get such behavior from human beings simply because of IQ and other factors which contribute to ignorance.

So, the UFT negotiates in good faith and to be fair, the UFT has to deal with the NYCDOE which quite simply might be the most dysfunctional organization in North America.

Our Union has stopped working for us, so field supervisors and regular supervisors do whatever they want. Thr Quuens UFT office is useless.

The Field Supervisors are a sham.

. To give an example, one field supervisor is Justin Stark. Mr. Stark is given a caseload that, according Freedom of Information Law records, appears to be only older teachers. Despite being sent to “support” ATRs, Mr. Stark usually winds up rating veteran ATRs poorly. To align this allegation of Field Supervisor targeting to age discrimination, Field Supervisor James Quail gave one veteran ATR an Unsatisfactory rating for the year. He then told that ATR that if he “retires,” he would then change the rating to a Satisfactory. The ATR agreed and was then given a new Satisfactory end of the year rating. The ATR then rescinded his retirement and held on to both ratings.

It is all about harassment.

How 30 ATRs Are Fighting for Over 100,000 NYCDOE Employees
http://educatorfightsback.org/how-30-atrs-are-fighting-for-over-100000-nycdoe-employees/

The big issue with the Uft is leadership. Thy don’t get it.

Create your own narrative in the papers.

News writers are attention whores. No morals. No values. They only care about being fed info to write stories.

I if I’m mulgrew, meet these whores I mean writers and give them some off the record intel regarding principals and discrimination towards teachers.

Change the context. The doe does that every day.