Fair Student Funding And Our Union. 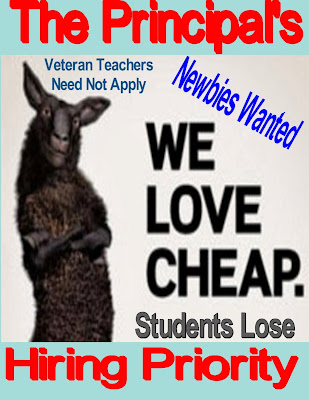 Over the years I was told by union officials that they had no say on the DOE's use of school based fair student funding.  While that is true the fair student funding would never have been implemented had our union President, Randi Weingarten, had not agreed to eliminate the seniority transfer and bumping provisions in the infamous 2005 contract.

School based fair student funding discriminates against veteran teachers, especially senior teachers.  Since the school budget is based on the school demographics and principals are more inclined to hire inexpensive staff, in particular, teachers.  The DOE gave principals total control of the hiring process as a result of the 2005 contract so they "hired the cheapest and not the best teachers" for their school.
Moreover, since the union agreed to eliminate seniority transfer and bumping, this allowed the DOE to follow through on their plan to change the hiring process.

Did the union know this would result in the ATR crisis?  The answer is yes. Just read my post of October 17, 2017 and the UFT report of June 2008 clearly shows the union warned the DOE that the new contract will result in an explosion of ATRs and discriminate against senior teachers.  Yet the union still  signed the infamous 2005 contract.

The bottom line the union leadership under President Randi Weingaarten knew full well the consequences of signing the infamous 2005 contract but signed it anyway.
Posted by Chaz at 7:32 AM

I don't disagree with you, but I'd argue what's even worse is that we voted for it. I mean, I didn't, and you didn't, but we did.

The DOE is recruiting overseas again. A friend got off a flight at JFK last month and told me there was large contingent of young, mostly Europeans on her flight that were met at the airport by the DOE. Then there's the recruitment drives in Wyoming, Montana, Idaho, and Colorado. Now couple that with what has to be a 2000 plus ATR pool that is'nt even considered for a position and you have an idea of just one facet of Fair Student Funding. Then there's the report of extensive bullying in NYC schools that is in large part blamed on not having a social worker on staff. Where are they? They're all in the library playing Candy Crush, and not because they want to, but because they are purposely kept out of the classroom. Did I mention the number of schools closing and trimming of staffs that are creating more ATRs? Or how about the veteran teachers that wore white after Labor Day and are sitting in rubber rooms awaiting 3020a charges because their principals couldn't afford their salaries? The UFT had better not rest on it laurels with paid Parental Leave because that meteor is still enroute.

The DOE will still be allowed to have two lists of ATRs. The first list for ATRs who came from closing schools or programs and the other for ATRs who survived their 3020-a discipline hearings. Based on past placements, the DOE only recommends hiring from the first list and only when there are no ATRs left on the first list will ATRs who won their 3020-a termination hearings be offered a vacancy. To ensure that ATRs who won their 3020-a hearings are not offered a position, the Scarlet Letter (red flag) remains on their file for principals to see, even when the ATR was found not to have committed the charge. The average age of an ATR is around 53, so this qualifies as age discrimination. Many fellow teachers that are being hired have not completed their masters, or are completely inexperienced. There are rumors that Tweed had encouraged Principals to target their more senior staff, and field supervisors are also coming with an agenda.

Yup. In September while interviewing to pre- empt my probable excision from where I was ( principal said, "I can't afford you so if you don't find a gig on open market you will most likely be excessed" ) the new principal who hired me said, don't worry I can accommodate your salary, I know how to work the budget". Well apparently she forgot or decided to just use the opportunity to excess the guy with the big mouth telling all the newbies in the building about how she was violating the contract left and right because she claimed with this years budget she could now no longer afford me. Interesting that it happened the day after I pointed out that admin had given every teacher the opportunity to file an APPR complaint based on the way they observed us. Never ends.....

Fair student funding is a policy that was put in place to circumvent the Union bylaws and the state Constitution. Also FSF is a policy that was created to reshape the education landscape so that ultimately teaching becomes a temporary job, that only the very young need apply, that no benefits shall accrue for the worker, that the worker shall be controlled fully, that tenure rights shall be abused, denied, and interfered with, that different classes of children will be given different education quality, the elimination of good middle class jobs, the elimination of job protection for the worker.
FSF is a tool of the super rich to bypass the laws that are currently in place. FSF is a ruse, an illusion created to trick the general public. FSF should never have been allowed to be kept in place for this long. It is clearly a violation of the law. It is a rich person's cheap trick.

So why did the Union agreed on Field Supervisors to harass and abuse ATRs like Statk does?

Why are they targeting veteran teachers in every school?

My principal said blacks and Puerto Ricans can’t learn.
By getting rid of all the senior teachers this ensures that the blacks and Hispanics
won’t be even given the chance to learn.
Other things he suggested that the rich controls everything and the controls education system.
If we don’t educate our citizens and target certain populations that the status quo will stay.
I will fight for justice and do what right no matter what is the cost. The cost was great so far.
So get rid of the senior teachers, age discrimination and they getting away with it.
Hopefully people can join me in Stop them.
JOIN ME

Systemic discrimination on behalf of the UFT.and the DOE.

They are harassing veteran teachers with underserved unsatisfactory observations.

My principal told one senior teacher "Feel free to hand in your papers, I need some fresh blood around here".

@6:42 your principal has a point, but if blacks and hispanics cant learn then it doesn't really matter who is in the classroom.