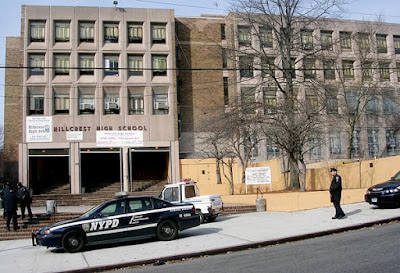 Hillcrest High School is not alone, 669 other schools joined them by not reporting any bullying incidents.  That is more than a third of the 1,600 schools in the NYC Public School System.

Hillcrest High School has been in the newspapers before.  One was an Assistant Principal who allegedly bedded female teachers in exchange for professional perks.  Another was the Principal who let students pass online courses without a teacher. Then there was the case of the "Vampire Girl", which was never reported since the Principal claimed it didn't happen in the building.

Hillcrest High School is only one of many schools that fail to report not only bullying incidents but other  other forms of violence and misbehavior as principals do not want their schools labeled as a problem school.
Posted by Chaz at 8:17 AM

Chaz what happened in the specialized high school test results indicating that once again its the asian and white kids who are being offered the seats while the blacks and latinos remain in single digit offers yet they make up the majority of students in the system.

Chalkbeat claims its the system and that its not because blacks and hispanics are inferior its probably the system. So how would changing the system change anything? Like what now? Make offers to other students to please everyone or should they change the "system". How is it though that the "system" works well for asians and whites and not hispanics and blacks? Oh it must be the system.

This is a must watch regarding aoc and how she never even applied to become congresswoman and how she really is working for a group behind her...Must watch

@9:58 you and anyone else are clueless to believe that Hispanic and Black folks are inferior to ANYONE. I own a bridge that Im selling that can take you from one borough to the next. It's $1. You can't be this ignorant. You just can't be. I'm going to assume that you are a racist. It's better than thinking you are this ignorant.

I think all the professional sports teams should be forced to have equal representation from each race.

6:24 I agree lets have more diversity in basketball because the game is rigged

5:35 ignoramus I said in a question as to WHY so many blacks and hispanics are not being offered seats in the specialized schools! Inferior is just one answer and I did not say that was the reason but rather a possibility or not.

However all you did was criticize the post with no solution to my question and this is the problem with people today first to complain but with no answers.

6:24 said it great...read the post and give answers instead of screaming racism

Chaz, why are you allowing this propaganda on the message board? What does AOC have to do with this post? Get these people out of here please.

9:58
How would you know if blacks and hispanics are inferior or not? Are you the hispanic black gooru with the magic wand that knows everything?

What about us teachers being bullied by students and administrators. We get it from both sides.

9:58's post screams that the reason for the lower admission IS actually because blacks and Hispanics are inferior. 9:58 thinks he can cover himself by reverse racism by saying it's not inferiority "according to Chalkbeat". This 9:58 thinks he is slick using sarcasm. Hey 9:58 did you hear about the black, homeless high school boy who got accepted into 17 colleges this week. Pretty darn "inferior" of him, huh, you racist bastard.

AOC's dad went to Brooklyn Tech. One inferior latino who slipped through the cracks?

Chalkbeat claims its the system and that its not because blacks and hispanics are inferior its probably the system.
We know some teachers who teach these kids really do believe that. I heard hints of that in teacher rooms. And don't you think that doesn't slip through and kids know it and act accordingly in response.

If you allow black and Latino students to enter the specialized high school programs with lower test and GPA's and ther was a white or Asian student who had higher grades wouldn't this be a form of reverse racism?

I work in Hillcrest, if the bullying happens outside, online and they don't report it, then what can teachers or the school do? These kids seem too busy being on their phone and vaping to be bullying. And the vampire girl attack happened on the mta bus. The principal didn't give fake online classes, but the assistant principal really was sleeping with everything that moved and taught English.

Also there's this pervasive attitude in the doe that because they are black or Hispanic that we need to feel sorry for them and that we should expect less from them. How many times were you told something like, "Oh, don't forget these kids don't come from the same background you came from. We have to give them every opportunity to pass." When we stop feeling sorry for them, then students of all races will start doing better in school. They know they can slack off because we allow it and give them chance after chance after chance.

8 56 Its ignorant people like you that are the problem.. get yourself a mirror and look at it and repeat the word racism and see if you shine

9 57 aoc is a congress person and congress is responsible for many education issues THATS why its relevant to have it posted on this site...go back to your kindergarten classroom cause thats probably where you are

@9:00 I do not see how telling me to go back to my Kindergarten classroom is an insult unless you are saying kindergarten teachers are inferior.

Also, in terms of the AOC post I was talking about, again, I do not see how this is related to Chaz's post. While congress is responsible for many terrible education decisions, this post is not about that and whether you love or hate AOC, she is not the only representative in congress making decisions. Also your post wasn't even about her congressional decisions but about how she works with Justice Democrats. Irrelevant to the post.

8:58. You are the one who is ignorant. I look in the mirror every day and I see a black woman who experienced racism all my life at the hands of others, mostly American whites. I was raised by a divorced black woman in Harlem and educated at the same NYC schools where I now teach purposefully. I can talk. I wanted to teach minority students by choice. So if thats what makes me ignorant for calling out racists, I guess I am smarter than you because I am not in denial. The racists always scream the loudest that they are not because they actually are and I call them as I see them. Am I a black racist? I am against institutional racism that built this country, but I hardly qualify as ignorant. You fit that category better than I do as you can't justify calling me names. I can. Your response is very ignorant to me. I am the problem because....? No answer...figures.

The NYC DOE continues to hide weapon reports and bullying to continue to appear to have good numbers. Just let week a student pulled a gun out on classmates in a lunchroom in a NYC DOE school. This is just plain nuts. They are waiting for another student to get murders on school grounds.