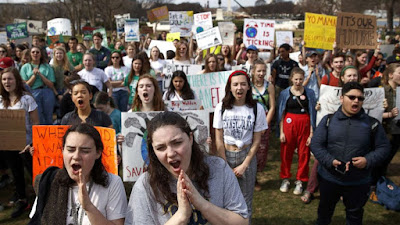 I was watching both Channel 2 (CBS) and Channel 7 (ABC) and noticed that the vast majority of students who were protesting climate change were White.  Few minority students can be seen at the student protest. Moreover, many of the students identified themselves as coming from the specialized high schools and some of the more selective screened high schools in the City.

Interestingly, the schools who had their students attend the climate change protest made sure that the students reported to school first and only were allowed to leave after attendance was taken in the third period.  Therefore, the schools get full credit for funding for the day.

The NYC Public School system that is only 15% White, based on the pictures and the two television stations, the student protest was primarily consisted of White students from the Specialized and screened high schools.  The bottom line is that the protest consisted of the White elites and are not representative of the student body of the NYC public school system.
Posted by Chaz at 5:44 PM

I’m not sure what your point is. Why does everything have to be racially proportional? So the white kids were more aware and concerned about this problem? So what? If it had been about something really important like cell phones or sneakers I’m sure The protesters would have been more racially balanced

lots of "other" students left school too. they didn't protest they just used it as another excuse to cut out of school. the students you speak of go out and change things for the better the "other" students change it for the worse.

My point is that the majority of students do not care about climate change. just the White elite.

Many of the "other" are students you speak of are living in poverty and in broken homes and shelters. They are not being taught about these types of things. Many don't live in a culture where school is important let alone the environment.

That's just ancestral guilt, since the white elite probably played the largest role in the causes of climate change.

Your observation is interesting and important. Thanks for noticing. This has been typical of the environmental movement since it started in the early 70s. I'm not making judgments about that fact, just noticing it.

Teen libtards Think they know everything. You know Trump isn't their President. Bunch of whiney brats needing safe spaces. GTFO! AND they don't give 2 craps for climate change. They just want another chance to protest and look like they care. Ask them what climate change is and what we can do about it and they will spew what they hear on the fake news. Maybe they want the GREEN DEAL lmaooo. Yeah sure these elite twits will balk when they have to walk, not eat meat and not have the comfort of air conditioning. ewww

Change for the better? Yeah when they are through eating tide pods and crying in safe rooms. Bunch of pussy hat cry babies.

White kids these days are the easiest to brainwash into becoming self-hating, anti-white, anti-Western, anti-capitalist 'activists'.

It's all virtue signalling and group think.

Socialism and then communism will be established here, but not until today's teens and 20-somethings take power as we die off.

The Union will then collapse and a new dark ages will ensue. Do not even think that the 'future is bright' or anything like that.

I think other kids care, but a lot of non-white kids know that they may have higher penalties and don’t want to take the risk.

This is all relative right? These same kids will grow up with either "white privilege" or "white guilt" it would only really depend upon what side of the fence you were looking at. As for the NYC DOE it became more racially polarized in the last 10 years. I always felt the ironic thing was that with election of Obama (and subsequent re-election) that Obama would bring Americans together. His policies and actions unfortunately brought us even more apart.

this protest is a joke . vaping and smoking that marijuana has caused climate change in their brains ...spoiled millennials ..oh sorry forgot to blame trump

@7:15pm...what do you think is happening on this blog? The same behavior you are attribute to the "others". It's just easier to NOT do the work of standing up as a school community and reporting the "non learning" and fake grading you are made to submit, to the media. We should be seeing teachers on the news daily, but we dont. Why? Again, it's just easier to NOT do the work. There is that word work again. Please, you face a bit of discomfort and you want to vent but let the "others" vent and you lose your damn marbles. You start telling ahem "facts" and ahem "truths". If you spent 10 minutes talking that crap to someone with a bit of brain matter, they'd wear your behind out with REAL facts. I could do it but this can never be the forum. It would be a wonderful way to share knowledge

I disagree with you @12:46 am...those kids that you think will fall under the umbrellas of either "white privilege or white guilt" grew up during the great Obama's presidency. They hopefully will be the generation to help end the disparity and falsehoods spewed so often around the world.

9:06 I am not really sure by what you mean "great presidency"? Remember it was Obama who hired Artie Duncan who initiated withheld federal aid to the states in their Race to The Top iniative. It was that which caused more Charter Schools and the UFT accepting a vastly inferior contract. Additionally this president spent more money then any president in the history of this country leaving us with a 20 Trillion dollar debt. The selling out of Israel, and the debacle of Middle Eastern and world affairs while racially polarizing "whit against black". So I really don't quite get how you equate this with great objectively. It was f on this discontent that the country elected an outsider because the American people realized that Obama didn't really have a clue on what he was doing and they didn't want 4 more years of Democratic blundering from a woman that we all know is crooked.