Racism Has No Place In Our Schools 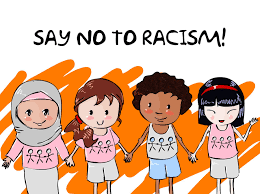 At high performing Beacon High School in Manhattan, where student acceptance is based upon their middle school academics and is, for the most part, color blind, racism has reared it's ugly head.

A White and Jewish girl privately complained to her guidance counselors about being "wait listed" by her university of choice while lower academically performing minorities were accepted.  She rightly felt that is unfair and discriminatory.  The guidance counselors,were apparently Jewish, sympathized with the student and agreed that the University's selection accounted for affirmative action criteria in selecting their student body and hurt her chances to get in.  It's common knowledge that top universities discriminate against East Asian and Jewish high school students when it comes to admissions and this girl was probably a victim of that discrimination as well as the affirmative action requirements.

Unfortunately, a Black student, who was waiting to meet with his counselor, overheard the confidential conversation and barged into the confidential meeting and berated the girl and her counselors and then reported it to his friends.   The same group that staged a sit in at Beacon High School on the school's selection system that limits the integration process because it does not look at race or practice affirmative action to increase Black and Hispanic students. The result was that the White and Jewish girl was subject to cyber bullying and racist rants at school.

Worse, a Black Science teacher identified as Mr. Green has told the group of students that  they should boycott school today and continue until their complaints are met.  This is unacceptable and the teacher should be disciplined since he is encouraging racism.  Moreover,the teacher is accused of inflaming racial tensions, encouraging kids to be insubordinate and violating DOE attendance and safety regulations.  I suspect that either SCI or OSI will be investigating this teacher and deservingly so.

Susan Edelman of the New York Post wrote an article about the situation and is a must read Here.

In a follow up article by Susan Edelman it appears the school's Principal, Ruth Lacey, actually supported the student boycott that has racial overtones rather than putting a stop to it.  No wonder our schools are having racial divides with principals like her who rather support than confront the racial issues associated with the student boycott.

Don't forget, this is based on what one student overheard. How can the students and teachers be sure he heard everything and is not taking it out of context. I agree about Mr. Green. He should be discontinued. An opening at least for ATRs. Also, did you read the poor grammar from one of the students who spoke out that was featured in the Post. Yes, this student definitely should go to college and attacking someone because she exercised free speech is a form of being racist. We all have a right to say and feel how we want without getting bullied. There's way too much hypocrisy going on at that school. Shut it down!

Complaining about affirmative action doesn't make one a racist. To automatically jump on the girl and accuse her of racism is ignorance at it's best

Does everyone agree with affirmative action and this still goes on? How much longer will it go on for its been around for decades now people have caught up

Can you imagine if the roles were switch and white teacher was egging white students to boycott schools because of something a minority said that was inflammatory? That teacher would have already been removed and dragged thru the streets. The Rev Al Sharpton would have been on the TV and newspapers..... not equal treatment. Civil rights was passed for all of us.

@1:47 Free speech does not mean you can say whatever you want without getting "bullied". It has nothing to do with how private citizens respond to your comments but instead how the government does. Also, I find it strange that you are criticizing the grammar of a student when your comment is riddled with grammatical errors.

I'm not defending any of the people in the story but as you stated, "There's way too much hypocrisy going on".

Another example of reverse racism at it's finest. ONE BLACK STUDENTS VERSION OF EVENTS IS VIEWED AS TRUTH AND TO HECK WITH THE OTHER STUDENT AND COUNSELOR. IT'S OK TO BULLY THE STUDENTS WHO SHOULD HAVE BEEN ACCEPTED because SHE EARNED THE HIRE SCORE. But because she's WHITE SHE IS WAIT LISTED. When is it going to be ENOUGH OF THIS REVERSE RACISM. THIS NEEDS TO STOP NOW.

Racism doesn't belong in our schools - but it's coming from DeBlasio, his minions and principals. DeBlasio is a piece of shit.

A lot of things is happening to ATR’S.
Being placed and not charging the school.
Rumor only a rumor on a new buyout
two years credit.
Does anybody can verify this

People living in NYC illegally are given free health care if you can believe that... and now today I saw on the news massive lines at the DMV of people - all of whom are in this country illegally, waiting for their new drivers licenses! Thats right people your hard working tax dollars literally at work. Who in their right mind can agree with this premise.

Its really hysterical that we as a society think that giving people rights who break the law is actually OK especially when we have an legal immigration lines of people wanting to come here LEGALLY. This is insanity at its finest and the biased liberal media just ignores this fact which plays into their hand of destroying our country.

At my school I see posters that say "Orgullo Latino" "Latin Pride" all over the place, especially during "Hispanic Pride" month.

Our feminists have a poster up in our hallways with a woman's fist as the symbol for feminist power.

What would happen if "white male" were substituted in any of those common things we all see?

This is hypocrisy that we must endure everyday. It does not help that so many small-minded white people have literally been brainwashed into hating themselves by Marxist identity politics dividers.

6:26pm: There's no such thing as Reverse Racism. Racism is Racism. To call it "reverse racism" suggests that only one particular group can ever be racist.

This whole situation seems very peculiar to me. I have to wonder if students' needs are being taken seriously if "confidential" conversations are being done in a place where others not involved in the conversation can easily hear what is going on.

I don't know the school very well, so I can not comment on to what extent minority students feel they have been oppressed or not.

What I can say, is that guidance should have taken more care in advising students. Find different ways to address student issues and avoid race related conversation.

10 48i
This is unfortunately what liberal cities in America have become. People (natives) are fleeing and soon one day NYC becomes a third world culture - pretty much is right now...however your post is spot on demonstrating how corrupt and hypocrital our society has become.

Empowering the indigent is not a solution to a population filled with people from every culture known to mankind. Treating the people who tow the line like criminals results in what you have today in NYC. A corrupt, hypocrisy filled hell hole of indigents sucking up every resource known to man.

It is only racist when you're white! This affirmative action crap needs to stop! If minorities want to truly be equal then meet the same criteria as everyone else to get admitted to a school or get a job! Gender and race should be eliminated from the applications!

Gee me and my white privilege are fed up!

Questioning or describing the existence of anti-white and anti-Asian discrimination in terms of selective college admissions is in and of itself a racist pursuit. Or at least that is how the 'woke' crew (AKA ultra libs or social justice warriors or progressive left) attacks such questioning.

No surprise to see the response.

Disagreement with the prevailing progressive narrative gets the knee-jerk label of racist, sexist, hate-speech, homophobic, etc.

I was laughing my ass off watching the news at the dmv showing massive lines of illegal immigrants waiting for their new drivers licenses!!! How in the world did we get to this point in our society?? Even the illegals were laughing saying how insane this actually is..

It became a problem when a student BARGED IN on a CONFIDENTIAL meeting between a student and a guidance counselor. Last I checked, you are able to speak frankly with a counselor with a guarantee of privacy. The student who walked in on a CONFIDENTIAL and PRIVATE conversation was in the wrong. What was said between the girl and her counselor is no one else's business. Imagine if you were having a frank conversation with a counselor, therapist, or trusted advisor - maybe you're upset and venting over something that happened. maybe you're angry with someone or something, and you are speaking off the cuff because you are supposedly in a confidential environment. And then, you find out that someone was EAVESDROPPING on your conversation and the BARGE IN and accuse you of all sorts of things. Why isn't the student who disrupted a confidential session with counselor being dealt with? THAT is where this whole scenario went south.

The correct response to the student barging in is "Mind ya bidness!"

Just another example of the schools not having proper environment space for counseling services...counselors are working with students out in the open due to no space...i have seen counselors with students in closet like offices, out in the hall, in the lunch room sitting at desks just about any where even seen counseling going on in the main offices of some schools!

The days of a counselor having a closed private office have erroded and now occupied by asst principals who have giant offices for no good reason other than their ego, non profit organizations coming into schools and taking up massive space many times leaving guidance counselors and social workers out in the open. Just another dysfunction of our wonderful education system called nyc public schools.

Principal Ruth Lacey was good like years ago when she founded Beacon. She is 75 years old and should retire and never return to public service ever...not for anything.