Why Doesn't The News Media Challenge Mayor Bloomberg's False Claim That He Has Reduced The Student Achievement Gap By 50%? 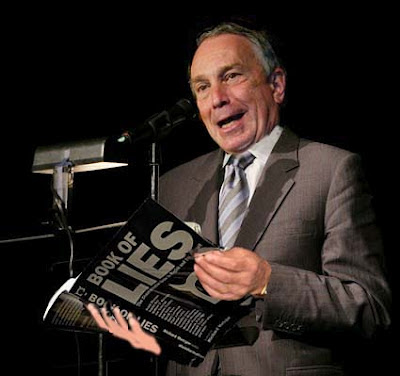 In an "Education Now" meeting in Washington D.C. the Mayor falsely boasted that his Administration has reduced the student achievement gap by an astounding 50% and that proves that "Mayoral Control" is on the right path to improve the New York City Schools. However, except for various education critics, the news media accepted the Mayor's false conclusions without question.

The Mayor falsely claimed that under his Administration the student achievement gap between "Asians & Whites" and "Blacks & Latinos" was narrowed by 50%. Yet not one newspaper or local network reporter questioned the Mayor's absolutely false and self-serving statement. Instead, the news media simply reported the Mayor's false boasts without checking it for accuracy. Is this simply incompetent journalism, or something much worse? Like being the Mayor's propaganda mouthpiece?


I guess that the news media rather bash and shame teachers than print the disturbing truth that the Mayor's education policies are failing, just like their media journalists who fail to independently investigate the false claims by the Mayor and his poodle the Chancellor.
Posted by Chaz at 4:59 PM

Why isn't "the media" asking him tough questions? Well, er, Sir, it's clearly because these sniveling, corrupt journalists are all angling for some bigger job down the road from Heir Bloomberg, in his multiple Bloomberg Inc. companies. They feel the longer and sweeter their ass kissing of this little Napoleonic freak, the better off they will be sometime in the future. Pretty simple answer, eh?

Chaz are they pulling atr's out of the classroom to grade the upcoming ela/math test?