Comptroller John Liu Says That He Would Honor The Previous "City Pattern" And Gets My Vote For Mayor. 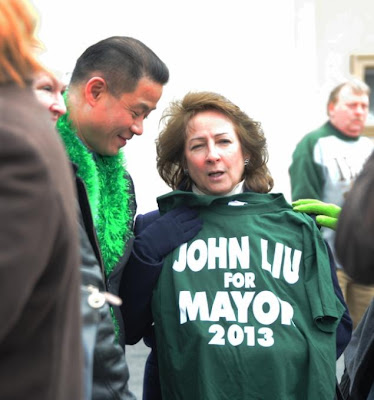 On June 12th, in an interview  Democratic candidate Comptroller John Liu made it clear that he would honor the previous "City pattern" for the teachers (UFT), supervisors (CSA), and  nurses (NYSNA).  The three unions that were shafted by Mayor Bloomberg.  Mr. Liu is the only candidate to agree to give the "City pattern", two 4% raises to the three unions.  Mr. Liu went on to say his previous statement that the retroactive raises would need to be negotiated on the City's financial condition was with regard to the retroactive 2011-12 contracts and not the 2009-10 contracts. In fact, Mr Liu has shown that he would review and rollback the more controversial aspects of Mayor Bloomberg's school policy.such as control of the PEP and changes to Mayoral control.

Mr Liu also took on the charter school movement by making those schools pay rent to City buildings and opposes co-locations.  Mr Liu  also showed his willingness to eliminate the phony school grades and his auditing of the useless "Children First Networks", that siphon money from the schools that they are supposed to serve.

It was  Comptroller John Liu who exposed all the consultant corruption in the schools and the City that Bill Thompson failed to do.  The big prize being the "CityTime  payroll timekeeping project". Finally, John Liu has proven to be a friend of the New York City Public Schools by donating computers to  a special education school in his district when the DOE refused and giving technology to a large high school that the DOE shortchanged.  Mr. Liu has stated that he can save $15 billion by cutting unnecessary consultants and contracting that is a hallmark of the Bloomberg Administration.  This would easily pay for union raises and increase the police force by 5,000.

Mr Liu has been endorsed by DC 37, Communication Workers of America, the Elecirical Workers and many other smaller unions.   Therefore, the UFT should follow their lead and endorse Comptroller Liu for Mayor.

MY VOTE IS FOR COMPTROLLER JOHN LIU - TRULY A FRIEND OF THE NYC PUBLIC SCHOOLS AND TEACHERS!

i second that and third and 100th that !!! Thompson is going to get it only because he is the best of the worst - always a good choice and he is already selling out the union and he hasn't even started

I wish I lived in NYC so I could vote for Liu. Looking likely that the lame UFT is going to endorse Thompson simply because he is "winnable". Makes me sick to my stomach. In the United States people should vote for those who share their beliefs.

Mine too. But dimes to dollars UFT endorses Thompson, who thought Bloomberg's idea of giving us nothing was the best thing since sliced bread.

Liu is the mayor that the unions need and the city needs.

Comptroller John Liu has always struck me as the best person for the job of NYC mayor. I also wish I could vote for him.

Lui has always been my personal choice - I even told Mulgrew in person when I met him. By the way, it was a pleasure meeting you while on your grading assignment.

My family has many city union members and we have decided Liu gets our vote!....lets spread the word with our brothers and sisters in all of NYC unions...vote Liu. The UFT will not get my help in this election and I have stopped my COPE contribution!