My Best Guess On What The Retroactive Raises For UFT Members Will Be. 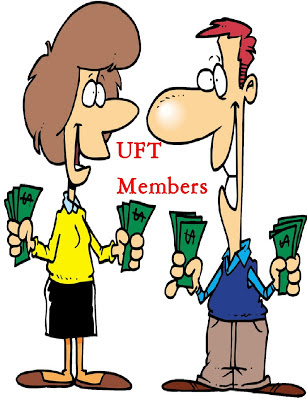 There is widespread talk about how inevitable it is for the next Mayor to settle with the three unions when Bloomberg unwisely decided "to kick the can down the road" and forced the new administration to settle the issue.  The question is how much will UFT members actually receive if all four years of retroactive pay is included?  While I cannot predict what the term of the final contract will be, I am taking the UFT at their word that "full retroactive pay" will be their bottom line.  Therefore, I did assume full retroactive pay in my calculations.

2009-10: There is a consensus that whomever is Mayor will "bite the bullet" and give us the "City pattern" which are two 4% raises.  However, since these contracts are four years behind schedule and the average New York City inflation rate is 2.32% for the time period between 2009 and 2013, the City will need to cough up a 12.7% pay raise for each UFT member.  However, we still owe the City 0.58% from the June 2009 agreement that traded the two days before Labor Day by having our TDA reduced to 7% along with other "givebacks".  Therefore, accounting for the inflation rate, we actually owe the City 0.593%.  Consequently, the City owes us 12.11% in retroactive raises for the 2009-10 contract.

2011-12: This contract is more problematic since it will depend on many factors such as the City's finances and the next "City pattern".  However, I assumed optimistically that we will get a pact similar to the New York City inflation rate (2,32%) for each of the two years and with "retroactivity" factored in, we should receive a 5.5% salary adjustment for the 2011-12 contract period.

Consequently, the total "retroactive raises" for UFT members should be 17.6%.  That means that a teacher at the top of the payroll scale would receive a raise of $17,685 for a top pay  of $117,658 still far below the New York suburbs. While the "newbies" will see the starting salary increase from $45,530 to $53,543, in line with the surrounding suburbs.

Regardless of who is Mayor, these contracts will include "retroactive pay" and we should all look forward for the end of the Bloomberg destructive education policy and the demonizing of our profession.  What better way to celebrate than with a much deserved significant pays raise that will go a long way to heal our wounds.
Posted by Chaz at 10:46 AM

Dream on. The state pattern is triple zeros. I agree we get the two 4% raises but after that, you are in la la land. Even John Liu isn't coming up with that kind of money. I like the fact that you are certainly raising expectations.

You are the dreamer!

Second, the City is in much better financial shape than the State.

Finally, the City unions are much stronger than the State unions and the democratic winner will be beholden to those unions.

Get analysis of salary raise based on prior pattern bargaining and set pattern rate.

However, I remember when Sandy Feldman and the law firm (Randi worked in as a Labor Relation lawyer) negotiated with the city a 5 year contract where it contained two years of zero-zero raise and I think we had to defer one of the retroactive pay.

I truly hope that your analysis is on target because teachers deserve that raise and no givebacks. However, I wouldn't mind if the 37.5 minutes of extended time can be rolled into the time schedule as 6 hours and 50 minutes and the professional activity should be just one a week and the remaining days as a 2nd prep period. With the demands of CCCS and the Danielson, teachers deserve 9 prep periods a week.

We can see how strong the union has been during the last twelve years. If there is a raise it will be for even more damaging givebacks.
Cheers.
Angry Nog

Here is what will probably happen: When the new mayor is in office, he or she will look at the books and discover a humongous budget gap with no end in site. It will be much worse than the state situation. Watch how the money will disappear to allow them to make the new pattern of three zeros to match the state.

Saying the unions are much stronger in the city is the funniest line of the century. Yeah the UFT and DC 37 have so much power. I see that at school each day. NOT!

And you know the teachers might set that triple zero pattern if whoever the new mayor gives the 4+4 from the first contract and throws in some sweeteners. Think about it, if it is settled in the middle of 2014 and we get the 4+4 right away, teachers will jump at it and the three years with no raise will just be ending in May of 2014. In September there would be 3% and the following year 2%. It would get about 94% of the vote.

I like your blog Chaz and my bank account would certainly like for you to be right but I can't agree with your analysis on this one.

By the way look at the federal patterns too. They aren't getting raises either. Mulgrew and Thompson are going to lead us to the promised land? OK

The federal employee unions are non-existent and have no real political power unlike us.

While I may be an optimist, we will be getting the retroactive raises for the 2009-10 contract since that is the "City pattern". The rest??????

I really hope you are right - but you know there are going to be giveback = next up school from 7:30-4:30 and a a school year that ends somewhere around July 31

I cannot argue with you about the 4+4. After that, I want you to be right but I have been around too long to think that is how it will turn out. Let's place a friendly wager on your scenario vs mine. I will bet a dinner that mine is closer to what we get: three zeros after the 4+4.

I don't think a triple zero phenomena is real. Maybe a combination of 1%, 2% or maybe 5-6% for three years are more realistic.

I think the last two years are too generous. I think a 3-4% raise is more realistic. Maybe 5% for three years is possible. However, none of the unions will accept the triple zeros the State unions gave.

If your analysis is correct, would there also be a retroactive lump sum to anticipate?

If they spread out the last pattern so that there are no zeros, it's the same thing. Unions won't accept zeros. Where were you in 1995 and 2003? you will be buying me a nice dinner Chaz.

The trip[le zeros was when the City was in dire financial problems plus there was a payoff to the leader of DC37. Neither is true today.

As for 2003. Randi sold us out when DC37 took an inferior contract. I highly doubt that will happen now.

I just did the math. It's 13.6% over seven years with the three zeros. 4+4+0+0+0+3+2. It fits in with what other surrounding area teacher unions have been getting since 2008 and I know it will fly with the teachers. Mulgrew could set the pattern. Read today's Times on the budget deal and it shows you the out-year budget gap soaring. You came up with over 17% for just four years and I have it at 13.6% over seven. Who will be closer? All I can say is I like Chinese and Italian food.

To paraphrase Sandy Feldman in 1995 when we got zeros in the middle of the .com boom, if you think we can do better, you must be smoking something.

I beg to differ with you. The triple zeros are unrealistic, no matter how you put it together. Additionally, the future budget deficits are a farce and only exist in the Mayor's demented mind. Every year there is a projected deficit and every year it ends up as a surplus.