Mulgrew Declares Victory As Governor Cuomo Gets His Way. - Teachers Are The Real Losers. 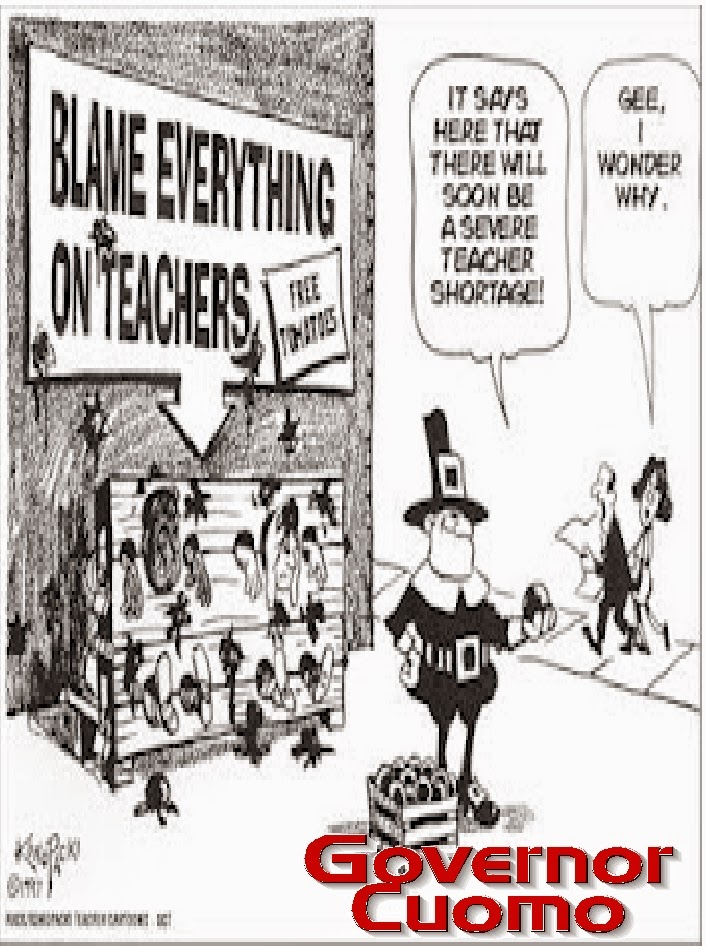 It appears that Governor Andrew Cuomo won big time in the budget as he gets many of the things he wanted in the teacher evaluation system. Not surprisingly, UFT Michael Mulgrew claimed victory for increased school aid and a delay in other issues in the Governor's education agenda.  However, the teachers are the real losers.  I guess for our disconnected UFT leadership its like Hamas claiming victory after the Israeli-Gaza conflict because they were left standing despite the devastation around them.  Let's see what we lost under the proposed teacher evaluation system.

First, The Governor gets an additional year tacked on to a teacher's tenure, to four years.  Moreover, in three of the four years, the teacher must be either "effective" or "highly effective" to be awarded tenure.

Second, the State will decide when a failing school closes down, not the City or school district.

Fifth, independent observers will be employed for part of a teacher's observation at cost to the school district.  See how well this has worked for the ATRs?

Sixth, No union approval is necessary for implementing the new teacher evaluation system.  It can and will be imposed on the teachers unions by the State.

Finally, all other unresolved issues will be given to the NYSED to develop a plan to implement them.  Yes, the very same NYSED who will be subject to intense pressure from the Governor to follow his education agenda.

Already, there is a looming teacher shortage, as few college students are going into education and fewer yet into the classroom.  Good luck getting good teachers for the New York City Public Schools as the higher paying suburbs, with better working conditions, and academically accomplished students will out compete the City for the dwindling supply of these "quality teachers".  Of course, as UFT Michael Mulgrew continues to proclaims victory, the demoralization of the teaching profession just gets worse.  Clueless politicians will continue to blame the teachers for student academic failure as the City struggles and fails to attract the necessary teaching talent necessary to raise student academic achievement.

The bottom line, is that accountability is for teachers and not the NYSED or the Governor.
Posted by Chaz at 7:04 PM

I spoke to a bunch of teachers at school today. Not a single ONE of them knew what took place up in Albany yesterday. Also, our clueless chapter leader did not even send out an email mentioning what took place and what is about to happen to all of us. Needless to say, teachers were pissed at the news that I filled them in with. The irony is that most of these teachers did not even vote in the last UFT election and most of them did not even vote in the governors election. Apathy among the rank and file is just as responsible for this mess as Mulgrew is.

The students are the real losers. Children living in poverty will have fewer ongoing stable relationships with adults in their lives. They will be subjected to a revolving door of unqualified novices.

Hey Chaz. A commenter on another blog mentioned that he thinks that since there is a New York Constitutional Convention in 2017 that Cuomo is going to change the tiers and retirement benefits of ONLY New York Teachers. (No changes to other civil service workers) Is this possible? Do you think this is a likely possibility? Your thoughts are always welcomed.

It will never pass and would be tied up in the courts for a decade or more if it somehow did.

I agree with this post which, in a myriad of blogs really tells the story. The bottom line is that when the recession hit in 2008 city and state govs went broke and into the billions in deficit. So, money becomes the ruling factor in decision making to prevent the nightmare which occurred in 2008 recession. The real truth or sadness is that the educational system of NYC will suffer terribly now, with the on onslaught of really good experienced teachers and good young teachers. The consequences will be down the road. However, I believe governments have decided that the population of the US is changing and we are receiving a huge influx of immigrants fleeing from just about every part of the world imaginable. These people come here with their hands out as the phrase "everything's free in a merica" waves through the ears of millions around the world. These people come to the US with no skills, bring third world mentality and spew poison around with their hatred and entitlement attitudes. So, the numbing/dumbing down of the US beat continues and best of luck to all

Giuliani repeatedly tried to get changes to the state constitution to do away with tenure. He also was bummed that TRS was controlled by the union (4 of 7 seats.)control of TRS. He wanted to get his hands on the cash.
I agree with Chaz - a change to the constitution will not happen while Cuomo is in office.

I think I'm going to try and get a job with the union. An additional 20% in salary looks real good.

Just curious what are our options in regards to striking? I really feel we have no power when it comes to negotiations with the state.

That "huge influx of immigrants" that Anonymous disparages so agressively are the students in our classes in NYC, are the guys on the bikes in the snow delivering our food to us, are the ones paying us rent under the table for illegal basement apartments and thus keeping untaxed cash in our pockets...the "poison" and "entitlement" is coming from YOU, not them...you sound like a throwback to The Know-Nothing Party. Ironically, YOU are most definitely a descendant of immigrants some other dumb-dumb raged against a century ago! Think before you speak!

The Triborough Amendment would prevent a strike. We'd all be fired.

They can't fire everyone. Taylor law wouldn't stop a sick out or a "stop teaching when the evaluator comes in the room and tell kids to read silently".

No matter how much hate to say it, but I have to agree. I mean it is the government that put them in this position. And the funniest thing is that it became sort of a habit to blame teachers for everything. It is not cool. They are even blamed for their students getting to use free essay services review, which is non sense. What I am trying to say is that it is so hard to be a great teacher in the country that value nothing about what you do every single day. It is sad.

No, a constitutional convention vs teachers could go through, and based on this week the union wouldn't fight it. Just look at last week. Mulgrew says it's a victory.