Putting Lipstick On The Pig Doesn't Solve The ATR Crisis. 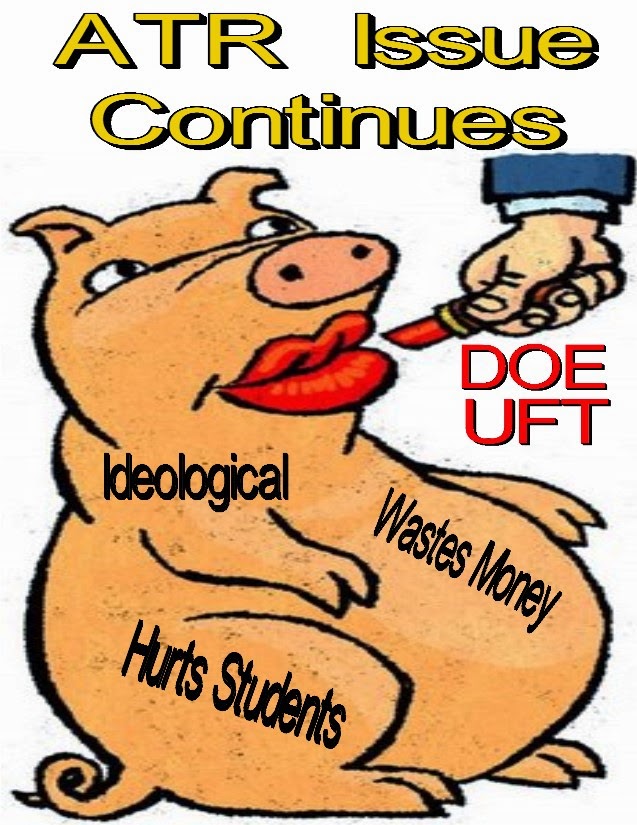 The De Blasio/Farina administration claims their policy has been successful in reducing the ATR pool by encouraging these teachers to leave the system as a gentler approach to solving the ATR crisis. Unfortunately, if you break down the numbers it still looks like the same old punitive Bloomberg/Klein policy that is costing the DOE over a hundred million dollars just to satisfy their ideological goals.  Putting lipstick on a pig does not make it more appealing. The DOE released updated information on the amount of ATRs who are still rotating and how many left the system, as of February of this year.  According to the publication Chalkbest, it broke down as follows:
To date, no ATRs have been brought up on 3020-a charges, using the expedited disciplinary process after being accused of "unprofessional conduct", whatever that means.

What's left unsaid by the obviously biased Chalkbeat article is that the majority of ATR teachers who found a long-term placement or leave replacement (estimated to be about 1,400) in the schools are not appointed but are simply placeholders for principals to hire cheaper "newbie teachers" during the summer when the DOE allows unlimited hiring.  Few ATRs are offered permanent positions and if the ATR has ten or more years of experience and makes $75,000 a year or more, the chances of being permanently hired are slim and none.  Until the DOE changes how the schools are funded, the ATR issue will continue to exist and over 100 million dollars a year will be wasted on a failed ideology rather than use the money for the classroom for more resources, reduce class size, and hire qualified and certified teachers to truly help the students. Of course if you only talk to the education reformers like StudentsFirst or E4E, of course you will insinuate that the ATRs are "subpar" or "ineffective". Better to ignore the issues and slant it to make it seem that the ATRs are the problem and not the failed ideology that has resulted in the waste of talent and money at the expense of the students.

All ATRs should join the ATR Alliance www.atralliance.org.

We have a detailed survey we initiated.

yes, that chalk beat article was biased and based on one sided information.

Chaz, I think its time for someone to sit down with Chalkbeat and give the other side of the story. How exactly does some "counsel" someone to quit? Perhaps, like ATR Supervisor Mr. Quail telling a lady "she's a fat slob, who dresses unprofessionally and needs to retire"?Why are only the city's numbers used and E4E and other deformer groups quoted? This Chalkbeat article is simply awful journalism.

How about an article on the millions of $ that have been donated to Cuomo campaigns by Charter School big wigs.

The guy is dirty!

nice article chaz. Too bad the media refuses to see what really is going on at the schools.

If a new teacher who is a leave replacement gets excessed, and can't find a position on the open market, do they become an ATR?

You are officially an ATR, if by the first day of the new school year you are still excessed and have not found a new position.

In all likelihood a new teacher will be offered a few positions since you are considered inexpensive and not tenured.

Chaz I have been reading your blog for several years now and I must say that it is quite sad that organizations like the UFT and the DOE are still implementing the atr policy. I truly wish the DOE would end the atr situation and get all the teachers, social workers, guidance counselors and secretaries back into schools so they can be utilized and help the students. This atr policy was clearly implemented by bloomberg and klein who clearly had no idea what they were doing but rather just went with it. Then, klein twisted the knife into hard working educators a bit more by screaming to the press that somehow experienced educators are incompentant!!! (excuse me while i laugh) but really this atr crisis needs to end and end soon....lets get our best educators back into the schools and stop listening to losing organizations like the daily news/chalkbeat....organizations that lose millions every day, going bankrupt and up for sale which no one seems interested in buying....

Were the 2 ATR's that were discontinued tenured? If not did they recieve a satisfactory rating?