Why Marriage Is Good For The Entire Family. 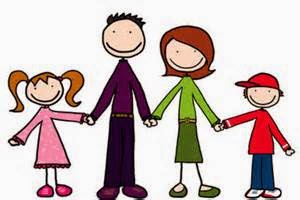 In our society fewer people are getting married and many children are being raised in a one parent (mainly mother) household.  While this troubling trend has become more acceptable in Western society, its not, for the most part, best for the family unit.  Long-term marriage offers many advantages when compared to unmarried family units.  These advantages are as follows:

When two parents are working, this gives greater financial support to the family and provides two positive working role models for the children to learn from.  Study after study shows that children from dual parent households do better in school than children from single parent households. In a two parent family, usually one, mainly the male, will be the disciplinarian while the other, usually the female,  being the nurturer and the children learn the various coping skills necessary to survive and thrive which is usually extended to their entire social world.  Finally, a two parent household provides financial, health, emotional, and educational stability to the family unit. Which greatly reduces the effects of poverty.

A committed relationship that two adults share with each other, under the same roof, gives their children a "head start" in being successful.  It doesn't matter if its between a man and woman or a same sex couple.  The bottom line is that their children will be better for it.

An interesting study shows that men benefit greatly when marrying and staying with a women.  It seems that married men enjoy better health and live longer since the women usually prods the man to take better care of themselves and go to the doctor when feeling poorly. Marriage also benefits women who feel they have a partner that lends them emotional support and giving them the feeling of responsibility in keeping their partner healthy.

It appears, for the most part, a long-term stable marriage benefits the entire family.  Too bad we seem to be going into an opposite direction when it comes to marriage. This might be one of the areas that we need to explore and reverse the trend if we are to reduce poverty and see better academic outcomes for the children.
Posted by Chaz at 9:34 AM

I can really attest to your view backed up by studies that children and parents do better being in a stable family unit. After "teaching" kids for quite a few years, and having personal experience, there is no doubt that
the family unit needs to be preserved and encouraged. Thanks
for making a crucial point.

I am a single mom who brought up a wonderful daughter who is a freshman at CUNY honors. This marriage two family crap makes me see red especially since many kids from two family homes are more maladjusted than my daughter will ever be. I made it my business to spend TIME with my daughter which many parents do not choose to do nowadays...either they are out for good times or making money to buy a bigger house or bigger car. It is not the number of parents in a home but the quality of those parents. One good parent is better than two bad ones.

anon 120...I think they were referring to the percentages. One parent household usually has to work a lot more to make ends meat, so the child isn't as nurtured by the parent.Obviously there are exceptions like in your case.I wouldn't take it personal. Have a nice day!

Did you wake up in a time warp today? As you note, many men have chosen to leave women with children rather than stay behind and raise the family they created. Probably the same men who refuse to put on a condom or support abortion rights. To the dads who stay and try to be great dads, you are all amazing. To all the dads who do not stay but contribute nonetheless, your role as dad is undeniably important; you also deserve a metal. But to use this blog as some kind of social claim against single parent mothers, just really makes you seem out of touch with the realities of many families in this city and country. Also this piece is also very heterosexist, I see you did not touch the same sex marriage issue; probably better that you did not. Yes, children are raised in many alternative family settings, some successfully; some not. But understand this: all two parent households are not perfect. Just because you can breed does not mean you can parent.

Chaz this post tells it all and it surely is the reason why kids in the poor neighborhoods do not perform. Its quite simple. Yes, we have the one parent mom telling you that it takes just one good parent but the hard truth is two good parents is what you see in westchester and long island and look how wonderful the kids perform out there. Its certainly not that westchester and long island have better teachers than nyc ...thats for sure

Why is it that when chaz mentions the family issue, he's behind the times, a racist, or a fascist.

The truth be told, statistically, he's right and that's why many of the students struggle.

To CHAZ and my esteemed colleagues:

This week during ATR rotation, I was verbally threated by a 6 ft 3, 250 lb sophomore that said he wanted to "smack the shit" out of me while covering his class. Of course, I had him removed and the principal suspended him. The following day, I was still so upset/afraid that I called in sick, and ATR connect changed my assignment for tomorrow.

Can I argue that this day should not be taken from my CAR?

The common lore that two parent households are "better" is such crap it's hard to believe it is never seriously questioned. Should parents who can't stand each other stay together for the sake of the kids? I think not. The fact is that our culture recognizes the dual parent household as the only way to raise successful children. We have created an economic system to reflect this value and then dismiss any other arrangement and not productive. Two parent or one parent households can and do abuse children. There is nothing magic about two parents. The studies you cite are all prompted by a religiously perverted influence over just what constitutes a family unit. This type of bigotry should be resisted at every level.

I go to many middle class mostly white schools and most of these kids live with 2 parents who are never around because they are too busy working to buy THINGS. Most of these kids are rude and act like the fools they choose to be. And then when you try to discipline these kids the parents suddenly appear to complain about you to the powers that be- who usually take their side. They live in huge houses and drive huge cars thanks to mommy and daddy but are still uneducated and vile as any single parent raised ghetto child.

By far your worst post ever.
Still loyal to your take on things...but give it some thought in the future.

I love your blog, Chaz, and you and I share some common friends IRL, but this was hard to take given that my husband (soon to be legally separated) decided in January that he "didn't want this anymore" and needed to "find himself" and left me with two adolescents and a third grader right before our 25th wedding anniversary. So I guess my kids are not switching from Honors track in school to a seat on the Failure Train. That's great.

Chaz, you are the perfect example of "Bad Research 101" by not being impartial to your premise and supporting it with articles about research studies that would take forever to track down and see if they are even valid! Let's see some real research, with clean data, to support or refute this premise.
(I am truly too afraid to think that your views are based on misogyny and/or homophobia and/or racism)