To The Daily News. It's The DOE's Education On The Cheap Policy That Causes Student Failure. 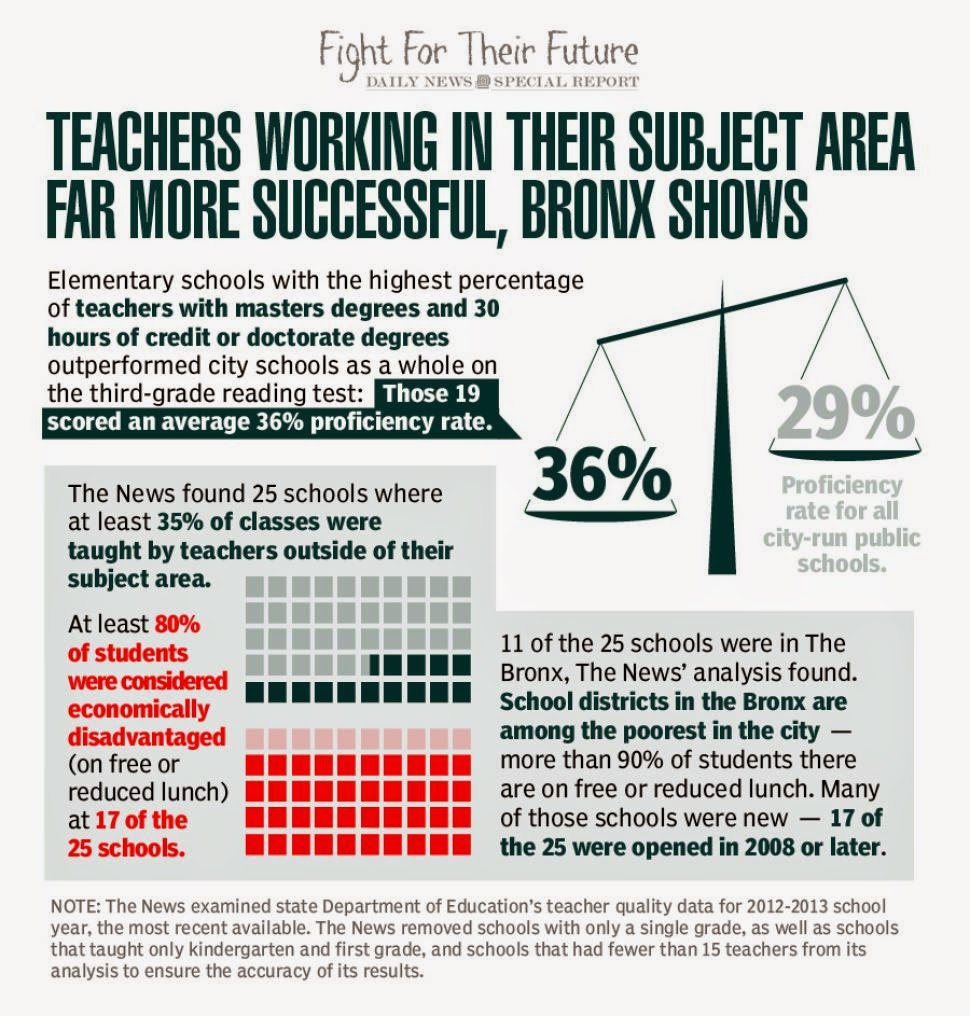 The New York Daily News ran a series about the New York City schools that was biased and supported Governor Cuomo's badly flawed education agenda.  However, in one of their articles, they did touch on a subject that they, and other media outlets have deliberately ignored in the past. That is the influx of "newbie teachers" and the use of teachers forced to teach in subjects they're are not certified in.  Maspeth High School had an astounding 88% of their teachers who had less than three years of experience while Banana Kelly had 69% of their teaching staff with less than three years of experience.

The Daily News article reported that there were 21 NYC schools that had over 50% of their teaching staff with less than three years of experience and are probably nontenured as well.  Worse yet, are the amount of classes being taught by teachers who are not qualified to teach the subject.  According to the Daily News and my own experience in traveling in the Queens high schools, this is a common problem and the more pervasive the practice, the lower the school's academic achievement ends up to be.  Even the DOE admitted to the Daily News that many schools use their Living Environment teachers (Biology) to teach Earth Science (Physical Science) and the results are uniformly disappointing with the majority of these students who have these uncertified teachers, failing the Earth Science Regents. Remember my article on Excelsior Prepatory High School where the school decided to not give the over 100 students the Earth Science Regents rather than hire an Earth Science teacher?  How's that putting children first?

The question is why does the DOE and the UFT allow our NYC Public School students to be exposed to uncertified teachers instructing in subject areas that they have no business teaching in?  The answer its the DOE's "education on the cheap" policy.  That's right, if you think its about what's best for the students, than you probably believe in the tooth fairy, the Easter Bunny, and yes, Santa Claus.  The truth is that the DOE imposed a destructive budgeting practice on the schools that's called "fair student funding" that forces principals to hire the "cheapest and not the best teachers" for their school.  Add that to the 14% budget cut since 2008 and the rise of the "Leadership Academy Principals", with little actual classroom  experience and you have a receipt for educational disaster.  I have written about this travesty previously and it can be found Here.  Finally, many schools try to save money by assigning phantom teachers to courses and force the unfortunate students to take an online or blended learning course.  Remember this?  Or in today's New York Post.

Its too bad the Daily News didn't bother to dig deeper into this issue but then they would have found out the real truth that its what's best for a school's budget than what's best for the students in the DOE's "education on the cheap" policy and that would bring into question the validity of the Governor's education agenda and their "blaming the teachers theme" for the school system's many problems.
Posted by Chaz at 9:04 AM

an ATR I know was placed at Banana Kelly. Some of the newbies asked him for help and the administration refused to let him in the classrooms. Most of his days were spent hauling boxes up several flights of stairs. As an older man, he at first refused. He was then threatened with a call to his ATR supervisor to be problem coded.

While we're on this subject- this problem is pervasive in middle schools. They need to STOP allowing common branch licensed teachers to teach 7th and 8th grade subjects! I don't care how long they are doing it but I have seen it time and time again- without a SOLID content background, these teachers are always at best, one unit ahead of the kids (if that).

The practice of having uncertified teachers and teachers teaching outside of their certifications is prevalent in Newark renew schools with concomitant disastrous reults.

You need to graphically illustrate the connection between charter school hedge funders and their mult-million dollar contributions to Andrew "I'm a fascist" Cuomo.

Could their relationship be illegal?

Newbie teachers? How about phantom teachers? I once covered a high school Spanish class that had no Spanish teacher. Instead, it was all Rosetta Stone all of the time with predictable disastrous results. As I make the ATR rounds in the borough of empty churches, I routinely cover classes that haven't had a regular teacher, young or old, for weeks, maybe months.

What a pity we have no out dissenters in DOE/UFT leadership.
Whatever happened to Mulgrew's call for a hardcore Truth Commission only to be followed by complete abandonment. I am tempted to compare our President's action to our Governor's cancellation of the Moreland Commission. It seems that neither party, the saying goes, can stand truth.

The newbie teachers here in the bronx schools are a disaster!! Traveling around schools in the bronx I am able to see this through the eyes of newbie teachers with 1-3 years experience who have so many classroom issues. The classrooms are over crowded and loud, the new teachers have no mentors so I am not sure how they even got into the classroom.....So sad. I live on Long Island and if the community where I live ever witnessed all these no nothing teachers in the classroom teaching their kids there would be a revolution on the island. However, in NYC the drum beat goes on as principals just cannot afford to hire real experienced teachers (they all sit in the teachers lounge thanks to bloomberg). Fix the solution DOE and change the funding back to central so principals can hire the best teachers and not a kid out of college who is in debt and has no idea how to teach kids or manage a classroom.

According to the American Statistical Association, variation among teachers only accounts for 1-14% of variation in student test scores; more influential factors include student and family background, poverty, curriculum, motivation, and other unmeasured factors. Any questions? That goes for you Cuomo, Bloomberg, Klein, Black (lol) walcott and evil moskowitch....read it and weep...what's your story now?? huh? More bull shit to throw at the fan to spread around NYC and prey on the weak. Pitiful waiting for wonderful karma to get cha.

I am a science teacher with 2 masters and I remember the first time I met a particular principal as an ATR. It was my first day assigned to his school. I was resigned to teaching there.
I thought he might want to know something about my qualifications or experience as a teacher - (27 years). More important to him, however, was the one question he asked me.
“Do you make phone calls?”
This is the type of shit an ATR teacher puts up with in the good ole NYCDOE. Incredible. This ass hole principal who can't shine my shoes or wipe my ass is asking me if I make phone calls?? Are you freken kidding me jack off? Farina and diblasio should be ashamed of themselves for allowing me with all my teaching experience and more education then most humans walking the planet to be asked this question. Sorry sorry sorry organization filled with schools so out of date, crumbling with old walls, out dated paint, chairs and desks from the 70's and principals so out of touch it is mind boggling to the human spirit

5 Worst creepiest small schools in the Bronx created under Mike Bloomberg, Joel Klein, Kathy Black and no other Mr. Dennis Walcott:
1. PEACE AND DIVERSITY – The principal is a real life frankenstein who walks around a small, dark high school inside of a elementary school!!!
2. INTERNATIONAL COMMUNITY HIGH SCHOOL – The principal there is foreign born, speaks horrible english, is anti union, a graduate of the bloomberg phony leadership academy and treats her staff like crap – just about every staff member dislikes her tight
3. HS FOR MEDICAL SCIENCE – The one in the Truman Building has a principal who is a walking time bomb – she appears to look like she will freak out at any moment flossing a tight short hair cut with a wardrobe that appears as though she may be a cleaner or worker in the building – add her asst principal who has a huge frizzy hair do and speaks real fast so that no one really understands what she is saying
4. HS FOR MEDICAL SCIENCE – This one is in the Taft building – OMG stay away from this tirant midget of a principal who speaks english like fidel castro…whooo stay awaaaaaay
5. HOLCOMBE RUCKER HS – Yes this tiny little hole in the wall has TFA staff all 22 years old, a creepy asst principal with no personlity and a principal who is non existant. This school is inside the banana kelly campus and it really is a hell hole

Thank you for sharing such great information. can you help me in finding out more detail on nursery schools in pune