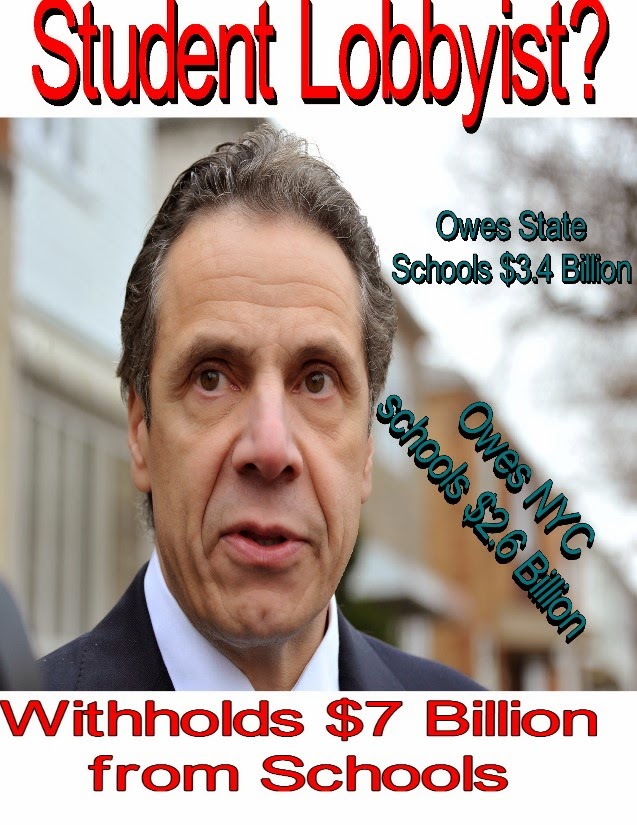 Tomorrow there will be demonstrations throughout the State against the Governor's education agenda.  The biggest one will be held in front of the Governor's Office at 633 3rd avenue at 41st.  To join the demonstration, enter at 3rd avenue and 36th street at noon.  While I have my differences with my union leadership, I will close ranks when it comes from outside corporate deformers and hedge fund managers who are funding the Governor and in return, his education agenda is simply an attack on teachers.

The Governor has claimed he is a "student lobbyist".  However, he has withheld $7 billion dollars to the City and State schools, despite a State surplus and is trying to blackmail the State legislature by holding increased school funding to his corporate deformer education agenda.  Unfortunately, for the Governor, his demonetization of teachers and withholding of billions of dollars to schools have backfired.  His poll rating are dropping like a rock with only 28% of the general public supporting his education agenda.  For public school parents its 21%.  Worse for the Governor, when it came to who the general public supports, they support the teachers unions by 55% to 28% when it comes to education.   Both the Democratic controlled Assembly and the Republican controlled Senate have balked at including the Governor's agenda in the budget.

The planned demonstrations should further deteriorate Cuomo's popularity and if followed up with hard hitting television ads, will eventually force the Governor to abandon his quest for higher office and look for other issues to champion rather than butt heads with real educators and the students who trust them.
Posted by Chaz at 7:10 PM

His father, the late/great Gov. Mario Cuomo, is turning over in his grave.