The Danger For Teachers In Governor Cuomo's Education Agenda. 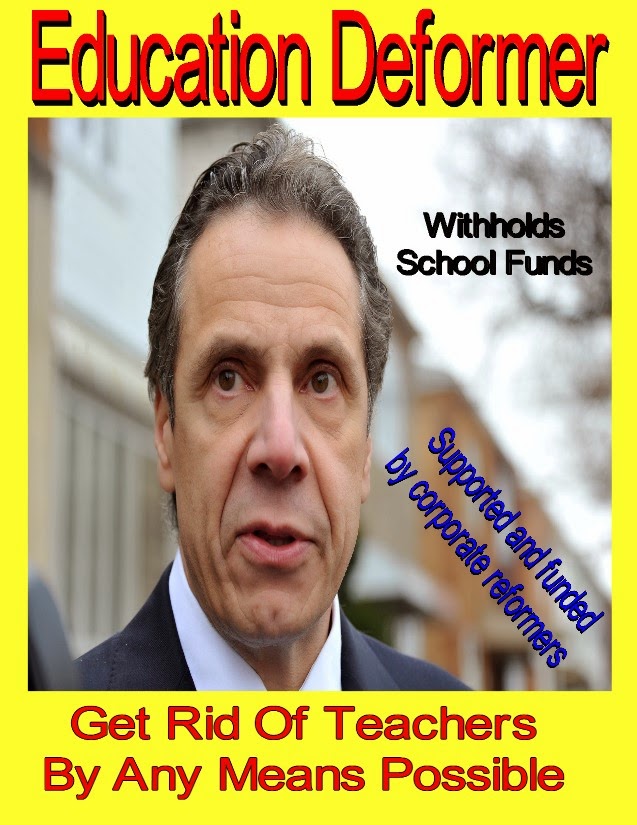 The hedge fund financed and supported Governor has proposed an education agenda that comes straight out of the corporate deformer playbook that intends to destroy the unions and make the classroom teacher a temporary occupation. Of course, the ultimate goal is to make teaching a temporary profession with no pension and retiree health benefits and making "due process" a joke.  Now that the recession is receding, the ranks of teachers are thinning with fewer and fewer candidates going into teaching and the boomer teachers retiring in droves due to the continued demonetization of the profession, you would think the Governor would want to attract highly skilled applicants to teach in New York State. However, that's not the case and this has not stopped the Governor in attacking teachers and trying to remove as many teachers as possible, despite the looming teacher shortage.

The Perdido Street blog published the 22 point breakdown of the Governor's education agenda and 11 of them are downright dangerous to teachers and their students, I hope to explain why.

Can you image that 50% of a teacher's evaluation is based upon a high-stakes test that's subject to manipulation by the State (cut scores and bands), "junk science", and a VAM that has proven to be beyond the ability of a teacher to control?  What teacher in their right mind would want to teach in a high needs school or with high needs students, even for an extra $20,000, if it means a loss of their job two years later? As for his merit pay proposal?  It has never shown to work anywhere, why should it be any different here?

To ensure that the Governor gets his 5% to 10% ineffective ratings, the SED can adjusted it to meet that criteria and not on the academics. Believe me, that's exactly what will happen as SED will manipulate it to fit the political narrative.

This requirement will ensure the Governor gets his share of his "ineffective ratings" as well as greatly reducing the amount of teachers who achieve tenure.

If any one year the untenured teacher gets a "developing" or "ineffective", the teacher will not get  tenure.   This will ensure that many teachers leave the system without any pension or retiree benefits. This will go a long way for the corporate deformer goal of making teaching a temporary profession.

That's right a mere accusation of corporal punishment or sexual misconduct will remove the educator from salary and benefits until their 3020-a hearing is concluded.  For many, that could mean up to two years without an income until the actual decision is published, even if found not guilty of the charges.

Good luck winning here since the teacher would have to prove fraud and show evidence of the fraud. The teacher is as good as being terminated if this requirement is imposed.

Dangerous, very dangerous.  A teacher has a right to face their accuser and  a trained arbitrator likes to see the body language of each and every witness.  Furthermore, how can a witness be cross examined if they're not there?  Great potential for abuse and unfair to the educator in a 3020-a hearing.

This will allow the new operators to excess the staff and add significantly to the ATR pool in New York City.

No way should the charter cap be raised and no increase in New York City.  We need the money to go to the traditional public schools and not siphoned off to the charter sector. Furthermore, the proposed increase of charter funds by $75 per student that will come from the overall education budget and take away much needed funding to the traditional public schools. It's a "rob Peter to pay Paul" policy.

This is a backhanded way to subsidize the private and parochial schools, which will take students and funding away from the public school systems.

Cuomo believes that the independent evaluators are worth the cost as it will be cheaper to hire them to fire teachers then to allow teachers to get a pension.

Someway, the the Unity caucus will get the delegate assembly to applaud like trained circus animals.

Why would anybody in their right mind want to be a teacher? At the risk of sounding bitter and cynical, I find myself actively discouraging my former students from entering the field of education. I feel I owe it to them to let them know exactly what they are getting into. The days of a guaranteed job for life and benefits fully funded by our employer are rapidly coming to an end.

In a survey of teachers in our high school (about 150, a total of 1 (one) would recommend that his/her own child go into teaching as a career. And that one teacher pointedly noted on his/her survey - "but not in New York State"

I also tell everyone I see in schools to get out asap - I should have listened to my parents 19 years ago when they said don't go into teaching ! But I knew better - ugh I am kicking myself now - big mistake - big!! Hope the newbies are miserable - hope there is a major teacher shortage - and hope all the deformers go to -----

Andrew Cuomo is a twat.

Don't forget--long before Cuomo our tough guy Mulgrew sold us out on the burden of proof in incompetence cases. And, regrettably, without much pushback from the membership for his monumental piss on members' rights.