How Do The Renewal Schools Compare To The Old Chancellor's District? 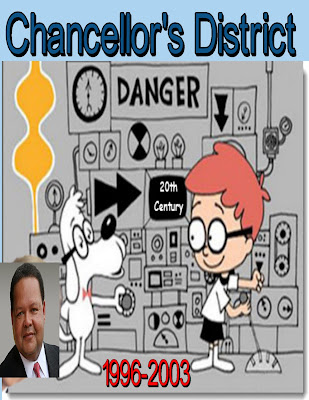 What are the chances that the Renewal Schools will improve student academic achievement?  To see if these schools can really succeed, I decided to take Mr. Peabody's  "way back machine"  to 1996 when Chancellor Rudy Crew, frustrated with the poor results from many schools who had too many high poverty, special education, and homeless students, decided to take the bull by the horns and tackle the problem.  He took the lowest performing schools and made it his own district called the Chancellor's District.  Fifty-eight elementary and middle schools were selected to be part of this new district, along with fourteen high schools. These schools were part of the seven year experiment to show that additional funding and class size limitations could result in the narrowing of the student academic achievement gap.

The Chancellor's District had mixed success before Chancellor Joel Klein shut the district down in 2003.  However, before the Bloomberg administration eliminated the Chancellor's District, the schools did show a narrowing of the academic achievement gap in English, primarily because more funding and resources were concentrated in the literacy field.  However, disappointingly, there was little significant improvement when it came to the Math scores. Despite promises by Joel Klein to continue to provide the additional resources under his "Children First" program, the schools were quietly put back into their community districts and the promised resources never materialized.

This brings me to the Renewal Schools and their requirements.

Unlike the Chancellor's District, the Renewal Schools are unable to attract veteran teachers since the only monetary enhancement is to work an extra 45-50 minutes at per session rate and only those days that the class is actually being held.  No holiday pay or TDA contributions are allowed.

When one compares the requirements and their mixed academic results of the Chancellor's District to the Renewal School requirements which seems less attractive for both teachers and students, the projected academic improvements appears to be wishful thinking.
Posted by Chaz at 6:17 PM

Really enjoyed this info. What a shame that this circus is still entertaining. I'm not sure if you and your readers know the following, but here goes. As of June 2016:
A). IEP students just need 2 regents passed in English and Math (or maybe English and Science) in order to receive a "local" diploma. No more 5 regents. They just need 2!
B). Any student who receives a 60 in any regents exam can appeal (and usually be given the extra points) the exam NO MATTER the attendance for the course over that semester. Students previously needed a 90% attendance rate to appeal. Also they needed a 62 or 63. All exams can be appealed at just a 60.
C). You all know the 4 + 1 rule I'm assuming. Can swap out the Global (which most kids fail this particular regents) and take a modified Math or Science.

The DOE will show HUGE gains in graduation rates. Watch and see Chaz. When DeBlasio and Fariña unveil the graduation rates, you are going to be stunned. They have made it so much easier to graduate since this past June where A and B were granted. C was already in effect. Grad rates will show gains. No way DeBlasio and Fariña get embarrassed. They have manipulated the rates. Remember a few years ago when they all tried to scare us by saying all kids need 5 regents to graduate. It was being grandfathered in. Now you are seeing that IEP students can actually graduate with a local diploma and soon enough, general ed will get this option too. They just switched the whole script and not everyone knows.

And those 2 regent scores within the iep module can be 55. LOL. And it's Eng & Math

6:42,
You're saying the DOE hasn't turned only ATRs into babysitters, but also all teachers. The sad thing is that even if you put the answers in front of many of our students, they would still fail because they can't read, copy, or focus. deBlasio and Farina need to go, but instead Mulgrew is in the paper kissing deBlasio's ass, as usual.

I keep posting to tell people on this site that we make huge bucks (salary, per session, summer school, 403-b, and on and on) in very easy jobs here in NYC. Why doesn't anyone believe me? Stop complaining. Packing my towel for our huge summer vacation, it is right around the corner. Sunscreen anyone? Arrgh.

Good point. As a high school teacher, I am shocked, even still to this day, how many kids make it to high school without ever learning how to read properly. It amazes me that kids give me a blank look and make so many errors when it comes to essay construction, simple errors, we're talking spelling, grammar. Constructing sentences which make sense. I don't blame the teachers in the lower grades, they are under pressure to pass too, but something must be done to mitigate these issues in the lower grades so that by the time they get to high school the kids have a firm grasp on writing mechanics.

Please explain the 4+1 rule. Thank you.

Per Session for everyone!!!! How awesome is the YABC program?

No one believes you cause we all think that you're a Fu*^ing moron.

I got the monthly UFT rag in the mail today. No mention or notice of the annual UFT ATR meetings - what a surprise. It went promptly under my cat's litter box, where it belongs.

To save on teachers the maority of high schools have only 4 days of Science instruction and one day of lb (4 + 1). While the rest of the State ahs a 5+ 1 Science program. The result is lower Regents passing rates an the teacher is held accountable.

To the anon guy stacking paper - yeah we get it some folks have it easy - just like NYPD where some are cooping in snoozeville while others are buy and busting guns of the street on an UC assignment - enough already - many folks are in tough spots!

Chaz, may I suggest doing an analysis on the schools that got off the renewal list. I strongly feel that these schools need to be further examined because fraud is running rampant in these schools. My former school Richmond Hill High School, was one of the first schools to get off the list. During the beginning of the renewal program, Mayor Diblasio and his entourage made a visit to the school accompanied by the media and the press and about a year later got off the list. Despite this happening I know and everybody else knows that nothing has changed in the school and just more teachers are passing students and manipulating grades as was indicated in a New York Post article.

He's not worth anyone's time or thoughts. People should just ignore him and his stupid comments whenever he or she comes on here.

Chaz the extra 50 min is not per session its pro rata. Serious money to teach that extra 8th period class.

I'm glad they are paying you that. However, in two Renewal schools I know of they will only pay the teachers at the per session rate and the UFT should be grieving it.