How Is The ATR Financial Inicentive Working? Not Too Well So Far. 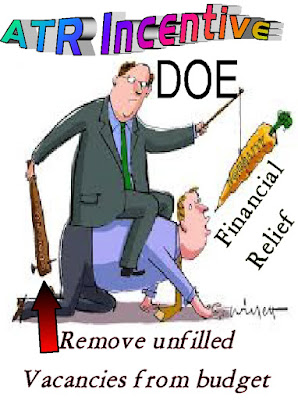 At the beginning of October the DOE informed principals they can hire ATRs at a steep financial discount for the next three years. The schools get the ATR for free this year, at half price the second year, and at 75% the third year.  Of course, the ATR is at full price thereafter and must be placed into their rightful seniority rank in case of school excessing. Since that time, two weeks later a grand total of 20 ATRs have been snapped up by the schools.   That's right out of 1,304 ATRs only 20 have been offered permanent positions for the mathematically challenged only 1.5% have obtained permanent employment. Of course, there is no guarantee that the 20 placements came from the 1,304 rotating ATRs, some may have been provisionally assigned and were converted to a permanent position so the percentage may be even less than 1.5%.

There is no secret that the schools have hidden vacancies and for one reason or another failed or deliberately decided not to fill them while waiting for the perfect candidate.  Now its October and schools have found that they must fill their vacancies and cannot hire from the outside until the second semester.  Moreover, especially in the Bronx and the many high poverty struggling schools, they find themselves desperately seeking teachers to replace the recently hired who have already quit and getting no nibbles.  Add that to a shortage of teaching candidates as more college graduates are abandoning teaching as a career and a looming teacher shortage is just down the road.

One would think the DOE's ATR incentive would have schools falling all over themselves to hire ATRs but the truth be told the DOE has done such a wonderful job demonizing ATRs as bad and unwanted teachers that with their encouragement, have enlisted the education reformers and media  to push for  an end of  "last in, first out", for New York City teachers while demanding a time limit for ATRs when they know quite well that the DOE$'s own hiring policies penalize schools that hires a veteran teacher. Without a stick the DOE's carrot has no consequences for the schools if they reject the DOE's offer.

As more of the recently hired "newbies" quit or are terminated due to hostile classroom environment, student discipline issues, and more respected and lucrative employment elsewhere (about 50% quit within five years) maybe, just maybe, the ATR financial incentive might gain traction but I'm not holding my breath since 25% of the schools have Leadership Academy principals and they are brainwashed in believing that ATRs will contaminate their younger and untenured teaching staff and don't even bother to interview ATRs, least not hire them.

Will the ATR financial incentive reduce the ATR pool?  Only time will tell but only if the DOE also employs a stick with the carrot.

Note:  The ATR incentive is for teachers only and not for other UFT members.

A large high school in queens with a decent admin and reputation has 3 vacancies listed in my license area. I sent my resume and haven't heard back from them. It couldn't be that because I'm an ATR at maximum salary ??? Farina is evil for continuing this waste of resources and diBlasio is a effing moron

Farina is corrupt too.

It's a ridiculously ineffective response by the UFT. It gives the façade of real promise, until you scratch the surface of the sugar coated turd - unfortunately the unquestioning seem to be devouring this treat, like everything else presented at a UFT buffet.

Some of the schools are leaving the vacancies and having rotating ATR cover the classes,rather than hire an ATR permanently.

The financial incentive is not working because it was never meant to work. It is a defensive move by the DOE. They are proactively preparing a defense against racism and ageism. They want to be able to show the courts, if need be, how they tried to place the ATRs but failed because they are undesirable and useless. What they are really demonstrating is how effectively they damaged the career reputation of the teachers in the ATR pool. IT IS EXTREMELY IMPORTANT for the ATR pool data to be obtained broken down by race and age. A federal lawsuit against the DOE is a must.
There is a limit to how long the DOE can ignore FOIA requests for ATR Data.

The DOE is already being sued by Preet Bharara about a Queens School where the administration is racist. There must be additional follow up suits showing that the DOE is racist and ageist. The ATRs should collectively begin a lawsuit for discrimination and seek unspecified damages for discrimination and an appropriate remedy fo replacement into a classroom. Finally the DOE has repeatedly shown a pattern of racism and ageism.

ATRs, Contact Preet Bharara's office ! The UFT has colluded with the DOE on your
persecution.

The Bronx is burning. It will be the 1st borough to go entirely charter. The amount of high schools that are either renewal or focus is devastating. Every HS teacher is the Brinx will be an ATR soon. I'd say within 5 years.

Why is the UFT going along with this farce? It should stop all outside hires until ATRs are placed. 1.5% can't be seen as successful by even the most revolting UFT sycophants.

I was speaking with a source who confidently told me the DOE is keeping the ATR pool because they need a reserve pool of educators including teachers, guidance counselors, social workers and secretaries fearing a huge shortage in the very near future. The ATR pool is being kept to have a "reserve" of educators when the huge shortage occurs. By having the Atr POOL THE DOE will be able dispense the pool to keep things going until the DOE can go overseas to recruit future educators. The situation is worse than any of us thought and the DOE is all over it. The result of the research has forced the DOE to keep the ATR pool as an insurance for the upcoming teacher shortage. So, when the shortage hits the ATR pool will be dispersed as the insurance the DOE needs to keep classrooms and social worker offices afloat. This makes perfect sense now and could possible explain why the DOE continued to keep the pool even after Bloomberg left. The data is pointing to a huge shortage if you look at education departments in higher education institutions. Translation, you better have insurance in the form of educators to fill the huge gaps that are feared to become a reality.

LUCIFER HERE ON EARTH AND THE ATR POOL

Joel Klein who created the ATR pool is the devil in disguise and he uses the satanic ny post newspaper to get his evil thoughts out to people. Take a look at the “P Tech” myth articlehttps://garyrubinstein.wordpress.com/ I cannot stop laughing as I read the article published by a true genius In Mr. Rubenstein. It is truly sickening that people like Joel Klein are such douche bags in that they are so self absorbed in their own useless existence that they will say anything to make them look like the messiah here on earth. When Klein was chancellor of NYC schools, he created a devilish environment and any NYC educator will tell you that Joel Klein was not disliked, no that is too simple,.,,,,he was truly hated by every single educator in NYC and if you can find me a single person at the NYCDOE who works in the schools who differs from what I am writing about here, please post it. Otherwise all other readers need to really hear it about Joel Klein who very well might be the devil in disguise here on earth.

Hung out with my ATR AP today. Great guy. What a great laugh. System is so freakin messed up. The stories are amazing. So hysterical, keep on laughing. The money is automatic.

The ATR provisions were allowed to sunset and this incentive deal put in place because that FOIL info is soon to be released. Also there is a suit against the DOE by a teacher that was fined after a 3020a and turned into an ATR. The suit deals with the inferior treatment and diminished rights ATR as punitive. It is and it's discriminatory.

Ridiculous. The ATR pool started more than a decade ago, and there is no chance Bloomberg gave a rats ass about a shortage that would happen after he left.

ATRs you all have legal standing.
Reputational damage is highly damaging to the value of your human capital,
especially when is based on libel and fraud.

ATRs you can organize and make a class action law suit.

ATRs, all attempts to FOIL the ATR data have been met with delays, resistance and a cover up.

ATRs you are approximately 55 years old on average and with 23 years of teaching experience. That is a strong indication of age discrimination.

There are a disproportionate number of African Americans and hispanics among you.
This is called racism.

With ATR data, you could merit a large damage award from the DOE for humiliation,
harassment as well as damage to you human capitol and reputation.

Finally, the DOE and UFT have acted in collusion. The ATR system is a result of wilful ignorance of age and race discrimination laws. There is evidence of systemic
racketeering throughout the DOE administration in the implementation of this scheme.

Ahhhh, another week down. Getting easier & easier

Being an ATR is like being on a beach in Mexico. Gulp gulp Ahhhhhhh!

UFT is corrupt too.

How can we get preet bharara to address this discrimination? There has to be something we can do

I got lucky with a supervisor as my lesson was rated Satisfactory. I'm in a good school too which helps. Still, would like to have a permanent position, just not at some school with a crazy administration.

You can call him and arrange to meet Preet to discuss your complaint.
He might be better able to obtain ATR data.

You can organize ATRs to file a class action civil law suit. You need to FOIL data
about the ATR population.

You can hire your own lawyer. You must show "standing" which means you have been damaged by the DOE ATR policy.

If the DOE wants ATRs to be picked up, there's a better chance by going to a weekly or bi weekly rotation. Staying a month is pointless.

What license is your school looking for?

What about schools making up fake vacancies so they get sent a bunch of ATRs for free, and then those ATRs become free. Where is the oversight?