Why I'm Not Voting For President. 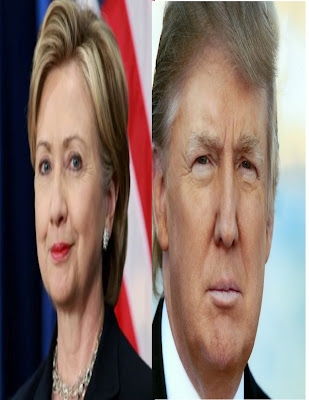 Over the last two months I have been wrestling with my decision on who to vote for.  Hillary Clinton or Donald Trump?  After watching the two terrible debate performances by the both of them and the obvious character flaws both have, I have decided to vote for neither one of these unworthy candidates. Listed below are my reasons why.

She is untrustworthy, a liar, and  her track record shows a pattern of deceit and denial when caught in the act. Examples are the leaked transcripts of her speeches to Goldman Sachs in which she said she must show a public face to the general public but privately can have a different point of view when supporting her donors.  In other words, she is deceitful and untrustworthy.  Then there is the private email server and the deleted emails some classified.  Least one forgets her Clinton Foundation, which apparently used a  "pay for play" scheme to reward donors, (see the Haiti article) many of them foreign, to get influence to the State Department through Secretary Clinton.  Finally, she flipped flopped on trade and lied about not calling the Pacific Trade Pact the "gold standard" for trade agreements.

Where do I begin?  He shoots from the hip and is short on specifics, acts like a teenager like his locker room banter, (high school sports team). Then there is his failure to focus on his opponent as if he is in a boxing ring and focuses on the crowd not the other boxer (Gold Star parents, Miss Venezuela, etc).,  His ever lengthening enemies list in his own party and instead of making nice and listening to advise, he attacks everyone of them as if he has a scatter gun and ends up damaging his party and himself as well,  Calling Donald Trump a demigod would be an appropriate description of hm and he is unfit by temperament to be President.

Both Hillary Clinton and Donald Trump has a checkered history to say the least. Hillary's go back to her support of her husband thru his many affairs and blaming the Monica Lewinsky affair on the Republicans and not her husband.  Who can forget Benghazi?  When she falsely blamed an anti-Muslim video for the spontaneous uprising and didn't have enough protection for the American Embassy. to repel the planned Answar al-Sharia attack.  Let's not forget Whitewater as that scheme almost led to a criminal indictment for both Bill and Hillary Clinton back in Arkansas in 1992

As for Donald Trump?  There were multiple bankruptcies, two failed marriages, alleged cheating, a history of disrespecting women, and his abuse of the tax system to pay little or no taxes.  Let's not forget that his treatment of his employees was far from exemplary.

What about the third party candidates?  Gary Johnson of the Libertarian Party supports private schools, wants to starve public schools of money, eliminate Social Security, and worker rights.  Add that to his failure to articulate a foreign policy, what is Aleppo? and you have a candidate that is not presidential and does not get my vote.  That leaves Jill Stein of the Green Party.  Unfortunately, she believes vaccinations causes Autism, is a member of the anti-Semitic BDS movement, and has no real understanding of the economy. Not getting my vote either.

The bottom line is that I will not be voting for the presidential candidate since all of them are not worthy of my vote.  Please don't tell me that one is the "lesser of the two evils".  As far as I'm concerned they are all unqualified to be President of our great country.

Any comments about Jill Stein, the Green Party.

Jill Stein did explain why many people misunderstood her stance on vaccinations. http://www.snopes.com/is-green-party-candidate-jill-stein-anti-vaccine/

I have nobody to vote for either. Trump has two failed marriages, but who is counting?

Stick with education because it is clear politics is not your forte. You sound like one of those Bernie Bros.

I think that we should dig up Nixon. The next four years could be like weekend at Bernies.
Angry Nog

By the way Charkbeat reports that Joel Klein wants to join Hillary Clinton's inner cycle? That does not concern you?

I believe you need to investigate who you support more thoroughly.

Im an ATR who just got my ABS,sent to me by TRS;
It didnt meet my AYP,so its back to work for the DOE-
It'll be 3 years for me b'fore I become
a re tire e

If I was on death row and they offered me chopped liver or a spam sandwich as my only two choices as my last meal, I would rather die hungry. Nothing wrong with not voting if you are not 100% content with your choice. Anyone who says otherwise is just pulling your leg.

I decided I'm not voting. There's no lesser of the two evils so I can't vote. People should just boycott this election. What happens then?

The 'incompetence' and 'moron' qualities are simply invisible to their supporters.

My prediction: Hillary with a media-supported, but ultra-low-turnout, victory.

I completely agree with you.

Living in New York you don't need to vote. What if you lived in Ohio or Florida where every vote counts. What would you do?

APs at Bryant tell me that Dwarka is voting for herself, in an absentee ballot.


I heard ATR Supervisor Justin Stark is writing in his own name.

Yes 5:11 this is a blue state. I'm not voting. Hillary already won NY not even wasting my time.

9:23: People should just boycott this election. What happens then?

Then Hillary wins and America is over. Every vote counts. Trump is far from perfect, but I am satisfied his agenda does not include destroying America and handing virtual control of it over to global entities. Oh yeah, and for big bucks finding their way into her money-laundering coffers. Also, please keep in mind that there will be at least 2 Supreme Court judges to replace in the next very few years. I don't want someone as utterly corrupt and utterly bought and paid for by foreign entities as Hillary getting to pick 'em. The effects of this will last well beyond a presidency.

It's a selection, not an election.. My vote does not count.. the Delegates will vote who they want..