The New DOE Plan To Get Principals To Hire ATRs Is Doomed To Fail. 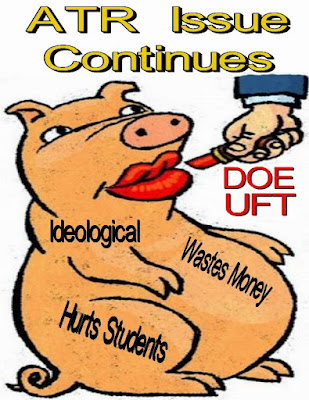 The DOE and UFT apparently couldn't come to an agreement on a new ATR agreement and the 2011 ATR Agreement is now back in force, except for the weekly rotation being monthly.  No mandatory interviews, no expedited 3020-a hearing for ill-defined "unprofessional behavior",  no automatic resignation for missing the first two days of a new assignment or missing two mandatory interviews, and no being treated as second class citizens. Most ATRs are jumping with joy as the 2014 ATR Agreement is no more.  Despite the DOE/UFT propaganda that there are less ATRs in the system (1,162), the truth is that when you add the ATRs in provisional appointments or temporary leave replacements, there has been little change in the total amount of educators without a permanent position.

True, the DOE has pushed their field supervisors to "U" rate rotating ATRs and force them to resign, retire, or be terminated but they are replaced by the continued downsizing at the renewal schools as these struggling schools continue to lose students and cannot attract the students from the community and are not allowed to take over-the-counter students.  The result is more teachers are excessed into the ATR pool from these struggling schools. This school year the schools hired over 5,700 teachers, most of them "newbies", to fill their vacancies.  Yet the ATR pool remains stable as few experienced ATRs were even given interviews for these positions.

Now the DOE with or without UFT consultation, has decided to offer principals an incentive to hire the ATRs.  According to the Principal's weakly, the DOE incentive is as follows.


Effective October 5, schools in districts 1-32 that hire Centrally-funded excessed teachers on a regular, permanent (not provisional) basis during the 2016–17 school year, will be eligible for an allocation to subsidize the cost of the teacher to the school. For each of the first three years that the teacher remains at the school, the school will receive the following allocations, reflected in the TO in Galaxy:


§  In Year 4, the school is responsible for the full cost of the teacher.
..
On the surface one would think that the schools would jump at the chance to get a highly experienced ATR for the classroom for free the first year and at half price the second year?  The problem is the DOE proposed a similar incentive the last two years that included getting the ATR at half price the first year, free for the second year, and at the school's average teacher salary for the length of the contract (2018).  The result?  Few, if any veteran teachers were offered permanent positions and in some ways the last incentive was a better deal for the schools then this proposal.  Why didn't principals jump at the chance to get an experienced teacher for cheap you asked?

T   The reason is quite simple really.  First,  once an ATR takes a permanent position, he or she takes their rightful rank in the school's seniority system and if there is excessing the ATR would probably have seniority over less experienced school staff who would then be excessed.  Second, in schools with Leadership Academy principals the veteran teacher is dangerous due to their institutional memory on how collaborative schools work.  Third, the ugly head of age discrimination is a real concern as many principals want younger teachers they can abuse rather than veteran teachers who can sniff out bullshit when presented to them.  Finally, once the ATR is in a permanent position, only a 3020-a hearing in front of an independent arbitrator can result in the teacher's removal from the school.  A headache that some principals rather not go through if they don't need to.

T    The latest DOE incentive to encourage principals to hire an ATR is inadequate and is doomed to fail for the reasons I listed above.  Let the union and the DOE show me otherwise with real statistics and not unsupported statements. The only way the DOE can get principals to hire ATRs is to completely ban schools in the District from hiring new teacher until all the ATRs in that subject area are placed.  Principals who try to hide their vacancies would be penalized by either eliminating the hidden vacancy from the school's budget and/or take disciplinary action against the Principal.  Then you will see the schools falling all over themselves in recruiting and hiring from the ATR pool with only a handful of educators with obsolete licenses left in a vastly reduced ATR pool..

I agree with your analysis. The only way to make things right for everyone, especially students, is to go back to central funding - where all schools can hire the best possible teacher regardless of salary. In actuality, the city is paying the salary, but the fast food business model and its accounting system has insured newly minted inexperienced teachers over those with experience and tenure. As for the rotation, why is it monthly? How was that decided and what input did we or the union have? It should be a professional courtesy to have a union that asks us for input and keeps us informed.

So, a repeal of Fair Student Funding won't make a bit of difference. The principals won't hire older teachers regardless of price. The only answer is forced placement, which they will never do. If they did place them all, half would retire before the day ended.

So, if the above statement is true, why won't they offer a real buyout for the ATRs with over 20 years of service like they did in the early nineties. Just a buyout for the ATRs. I would think that would be a very small number of people to buyout. Going forward, they need to come up with a system to not create more ATRS. I am sure the union would not oppose it on the grounds that the buyout would be for a specific group of union members since the union likes the idea of making different rules for different classes of workers.

11:48,
I wouldn't quit and I don't know any ATR that would. They are force placing ATRs every day provisionally and no one is quitting. If they were the city would magically start listing them as ATRs to prove the statistics that the ATR pool is shrinking. As for being placed permanently, that's much better that being placed provisionally. So if ATRs aren't quitting after being placed provisionally for a year, what makes you think they will if they are placed permanently? You seem to have embraced some of the negative stereotypes about us. More importantly for the DOE, placing us permanently would be in complete opposition to the whole ATR scheme.

The school I am assigned to for this location must have about 10 of those newbies. Every teacher I've covered for has been a new hire.

Read my last paragraph which I added, that could handle the issue.

They did in 2014 and only 94 ATRs took the buyout and most of them were retiring anyway. The buyout needs to be a minimum of a half a year's salary.

to chaz
that buyout was bogus and you know it!
so did every other ATR that is why no one took the deal.
20 years in but still get the penalty reduction - no way.
take away the -27% and im outta here.

Tks for the quick response my point is . If a 1/3 of our teachers are tier 5-6 now . I'd say in 5 years half our teachers union will be tier 5-6 . This will create a huge teacher shortage. Huge . With no end in sight .

Actually, I was able to get the actual number of new hires since 2010 and it averages out to be 4,720 yearly. Assuming there are 78,000 teachers and other educators with UFT titles, that means that 36% are Tier V or VI. However, since a good 33% left the system within that time period The actual amount of Tier V and IV is probably around 24%.

We need a class action lawsuit to stop age discrimination which has been going on for a long time.

"If they did place them all, half would retire before the day ended." is either a typo or a weird fantasy or a simple calumny.

Folks had similarly inventive typos/fantasies/calumnies regarding the source of teachers filling the APR pool. Those inventions have been obliterated by the facts.

Separate and apart from that, given the average age of the veteran ATRs, any buyout that does not include erasing the retirement penalty (for those not meeting the 55/30 or 55/25 standard) is doomed to failure. And that sort of offer is not in the cards.

Chris S (3:21): How does replacing one (retiring) Tier with another result in a teacher shortage?

Staten Island is being planned for the 21st and others are on the way.

Thank you for sharing such great information. can you help me in finding out more detail on magarpatta school admission