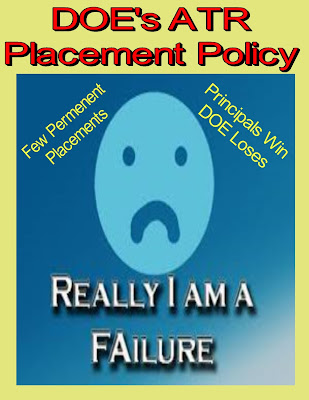 Last month I wrote a post that suggested that the DOE's ATR placement policy was a failure, which was based upon anecdotal evidence.  Now Charkbeat has published data, supplied by the DOE that confirms my previous post. According to the Charkbeat article only 41 ATRs were permanently placed since October 15th.  That is only 10% of what the DOE anticipated with their ATR placement policy.

Interestingly all 41 ATRs who were permanently placed were excessed due to school or program closing and not due to disciplinary or legal issues.  Which strongly indicates that the ATR assignment folks keep at least two separate lists of ATRs.   Moreover, the DOE admitted that the ATR pool consists of 1,202 educators and not the 822 that they claimed previously.  Finally,  their claim that the 1,202 numbers is 20% less than last year is false   Last year's number was 1,304 and that means the actual reduction is not 20% but 7%!

Another interesting item is that the DOE has admitted that principals would have to agree to permanently hire the ATR and would not be assigned without the approval of the Principal.  A clear win for  the principals.

The bottom line the more things the DOE claims to change, the more they stay the same. The DOE's ATR placement policy is a failure.

Chaz, thank you for your blog since our union does not tell us the truth.

hey chazz you do realize giving principals a say in hiring helps the atr more then anyone else dontcha?

Thanks ! Never any news nor authentic help and support from the union!

Giving principals the right to hire has resulted in the ATR pool. They have shown over the last decade that they will "hire the cheapest and not the best teachers" for their school. It's time to taake that power away and give it back to DOE Central.

i meant w- the forced placement if you get effective etc.
we're talking atr placements in the blog
duh

Field Supervisors aggressively rated ATRs unsatisfactory. That is their solution. They use Stark and others to do the dirty work.

By rating many U, they will reduced it further. Thank you Milgrew.

No offense but you are making zero sense.

Either you are an outsider or simply don’t get the DOE and how things work.

The issue is principals have been empowered. Called ‘junior CEOs’ if you will.

Chaz is right. The result has been the atr pool.

Principals want to groom and cultivate young teachers who don’t know their rights, will work during their lunch and fear for their jobs.

This will never change. Randy asher had his plan thrown up in his face. The principals used our power hungry chancellor’s own words from the 90s against her.

Chaz, when you wrote the November post, I believed you. Now the DOE has confirmed what you wrote. Where are union leaders publicizing the DOE;s failure?

I make perfect sense if you take the time to use your brain!
Im an atr 4 years and understand perfecttly.

Ashners original plan was to place atrs- and if they scored effective or higher they were permanetly placed.

therefore i would be stuck between two bad choices if placed.
Either I recieve a good rating and am placed without my consent- or I receive a bad rating and all the crap to follow for years. the rock or the hard place dilemna.

UNION is in on all this. Doesn't take a rocket scientist to figure this one out.

4:51 wrote: Most of the principals lack the essential skills to succeed as managers.

Unlike many teachers, I have had multiple jobs in the 'real world' before I went into teaching, and I can confirm for those teachers who may not be convinced that yes, indeed most principals in the DOE are inept and unsuited to leadership positions.

This is an interesting point, because the casual observer may ask, "So how did they get the position if they are so awful?" Fair question. Think of it this way. To be a manager in most companies in which you ALREADY work, you usually do not need to go back to school for several years, pass lots of licensing exams and go through many other types of hoops.

Many principals are actually teachers who couldn't hack it or couldn't stand the classroom, so they wisely used their time to get an admins license in hopes of escaping the teacher grind. They didn't need to be the brightest or the best to do all of that, they just had to persevere. No scruples or special talent needed.

Add to that, the DOE now seems to favor the meanest, most cut-throat seeming 'manager-types' when they hire. It doesn't help that the DOE was infected with corporate-speak and all that Jack Welch 'fire-em-to-keep'em-scared-and-productive' crap. I actually applied to the Leadership Academy twice some time ago thinking it would be an interesting thing to do, and after making it several rounds, I saw who made the cut: the meanest and pointiest-faced micro-managers possible.

So we have a perfect storm of bad leadership in many schools now, and the DOE thinks it's great because now teachers are truly the ones blamed for everything. Those 'manager-principals' then are tasked with clearing us out all the time. This is life in teaching now. Advise any young people who want to be teachers to choose another career. This one is finished.

They are not only as dumb as a doornail. Many of them are also mentally ill. In my district, the superintendent hired a mental case to run one of the schools. Then after a few years they made the mental case a superintendent.
It's a shame that they would put a person to run a school or district that could never do the job of the people that they supervise. Because they are incompetent, psycho losers.

Those are the type Fariña likes.

Just read the Daily News article about reducing ATR pool. The failed principle and now supervisor of ATRS Asher says they are still trying to reduce the size of the pool. Do you think there will be another buyout?

Even if they reduce size of pool this system is terrible and degrading to us! There will always be excessing due to budgets and new programs.

UFT WHERE ARE YOU!!!

This profession is finished and the newbies think they are sitting pretty with their moronic fake smiles, and stupid ridiculous props that decorate their baby faces in an attempt to look like "cool" scholars are in for a rude awakening. You tools aren't receiving tenureeeeee....it's a fact. DOE and Union have created a revolving door. Instead of walking around like you're in a sorority/fraternity house understand that these inept principals and aps are ruining your lives. They won't tell you this bc you are being used, but no matter how hard you try to impress...at the end of 5 years you will get the boot.Veteran teachers....if you aren't on hot seat yet, prepare yourselves. Either fight or flight. They reformers are slowly pushing all teachers into charter schools after DOE chases them out. That why even if DOE teachers get fired, charters picking them up. Only survival technique is to be savvy enough to know how to punch back hard.

To 7:58. I am most older teachers in my school talk about this very thing all the time. Few of the newbies know what's going on: the remaking of the profession to a temp-type job for 20-somethings to do and then 'go do something else' as Bloomberg famously said.

Those of us who have less than ten years to go are hanging tight, hoping to make it to at least 20 years (we have no one in my school of about 50 staff members who has more than 14 years in, the average being around 6 years from newbies to veterans).

Many of the teachers are buying digital currencies, some are looking into fix/flip of houses, others are taking side jobs. It is amazing how many of us are doing these kinds of things, in preparation of possibly being canned or being put on that road in an instant. We all look at each other and reinforce being proactive about our financial stability. Almost no one at my school who is tenured think they can survive until 25 years of service.

Danielson's especially has disillusioned all of us. Regardless of how great a teacher you are, you are judged by that (rife for abuse) and test scores (which are meaningless). Forget about so many other factors.

To 7:58. When you say punch back hard, I hope you mean to hire an attorney. This is what it will take to stop the beasts dead in their tracks. The UFT is pretty much a sham. They will go through the "steps" but in the end , principals and AP's know that the UFT is their friend and laugh at us when we call our Union Rep.
If you're in trouble, get legal counsel. Oh, and you can help your attorney out by having good anecdotals. Document conversations, disparate treatment, voice recordings, get witnesses: students, parents, colleagues. Of course you have to be stealthy.
Gather intelligence from any source that you can.
Above all, do your best to push away the fear and let your anger take over. Fear will eat up your energy and cause you to make mistakes.
If there are 2 of you willing to work together, you can be a real powerhouse.
If anyone has additional helpful comments feel free to add to this.

One more thing: It's all rigged. Don't ever question your skills and cry yourself to sleep. These are monsters trying destroy tenure. Nothing more, nothing less. Alway keep your self esteem high and remember one thing, THE PEOPLE TELLING YOU YOU ARE INCOMPETENT ARE INCOMPETENT THEMSELVES. Therefore, understand you are just on the" chop salary" list or" institutional memory" list. If your within 5 years your on the "never getting tenure" list.

You cant go to an attorney empty handed without having kept an accurate timeline of the harassment and recorded the scum . I mean you can go, but your case will be a long shot. Be organized and be smart. Play their game and set them up in stating illegal things and/or lying. Like someone mentioned above....put all the fear aside and focus on your mission.

The DOE won't remove horrible,abusive and serial harassing principals because those principals will confirm to the public what many insiders know-- that they have been running diploma mills with the blessings of the DOE. In short the DOE needs to make sure they dont piss off principals less they let the lion and tiger out the bag. Abuse of teachers be damned.

10:20 i agree with you but would add that we should consider stepping out of the shadows and start our own movement like the #Metoo. We each have a story that should be told. If you have anecdotals you can share them with the world. Why are ATRs being scapegoats for a system that is doling out fake diplomas.

Saw this on Facebook. Attorney starting up the ATR discrimination lawsuit that the UFT should have submitted.

Asking the Courts if Fair Student Funding is Fair to Students and Teachers
http://teacherslawyer.blogspot.com/2017/12/asking-courts-if-fair-student-funding.html

10:17...fingers crossed that this can move forward

Thanks for the link. Just signed up!