What If Santa Claus Became Chancellor? 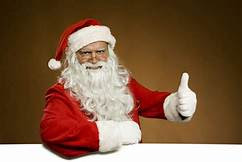 Now that the disappointing Carmen Farina has announced her long overdue  retirement, its time to speculate who the new Chancellor of the New York City schools will be. How about Santa Claus?

If you are a fan of my blog, Santa Claus has had little luck obtaining and keeping a teaching gig because of the DOE.  You can read some of these posts Here, Here, Here, Here.  and Here.  However, what if Mayor Bill de Blasio appointed Santa Claus as the new Chancellor?

Along with the DOE employees on the "naughty list" that needs to be removed by the new Chancellor. Santa Claus, needs to eliminate or change the Farina/Klein inspired policies that hurt student academic achievement ad cause a wide racial/income academic achievement gap.  The are as follows:

Making Santa Claus the new New York City Chancellor would really bring joy, dignity, and trust back to the City school system.
Posted by Chaz at 8:54 AM

Krampus is needed to punish all those naughty leadership principals and deviant scholars, Mrs. Claus just let them all go wild.

When Mayor DeB first took over he was destroyed by the criminal cabal known as MainStreamMedia merely due to his resistance to Little Eva's charter expansion plans, for about two weeks. Then Mayor DeB got back in step with The Plan-the corporate education lobby (Bloomberg). After the shellacking Mayor took on attempting to implement his campaign promises, all major education changes halted cold.

Of course, that included Tweed staffing-he never got close to even touching them since they are untouchable.

What about getting rid of that skank Namita Dwarka of Bryant?

Do not forget Santa Claus would extend a real teacher buyout with a larger payout and service credit.

The next chancellor will bring the same "joy" to teaching as the skank that is leaving. That's because this is a conspiracy. Both the UFT and DOE work for Bill Gates. They will hire someone who will push their unlawful agenda forward. To break down the public school system , the Union, Tenure, and all good-paying jobs with benefits.
There needs to be more class action. Keep looking for any legal remedies that can be exploited. That us the path to JOY!!!

He should banish ATR Supervisor Justin Stark to the land of Misfit Toys. I hear they need more inbred clowns.

HAPPY HOLIDAYS TO ALL!!!

maybe that little elf on a shelf francisco portelos will rise up from land of misfit teachers and become the new uft president.

She is untouchable. The Laws do not apply to her.

Stark is only a hitman to do the dirty work to go after veteran teachers.

What a shame. Edison is a great school. I hope that Justin Stark does not bring a bad flavor to the school.

What about the degenerate, sexual deviant of a principal by the name of Howie Kwait? Why does that loser still stay in power? He’s as bad as the Nazi Steven Duch at Hillcrest.

Thomas Edison is a great school. However, the administration is notorious in going after senior teachers. ERspecially the Science and Special Education APs.

Shameful. It seems that is hunting season for the most experienced teachers. Are they too expensive?

He likes to change grades, but under Fariña fraud us acceptable.

Santa would not allow John King to be chancellor, as Gotham Gazette is fantasizing.

He is a hitman.