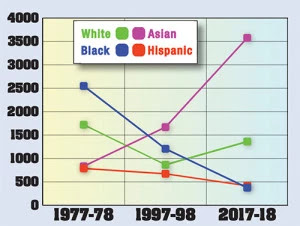 Black and Latino students only had a 10.6% acceptance rate for the specialized high schools.  The question is why so low?  According to Susan Edelman's article, education experts cited three reasons.

Add to the above three reasons was the elimination of academic tracking that allowed high achieving students to benefit being in with other high achieving students, be it the gifted and talented classes in elementary school and Special Program classes in middle school.. These students were given advanced academic instruction and more academically difficult work to challenge their ability.

In the eighties, student advocates pressured the Board of Education to eliminate academic tracking and the result was that potentially high achieving students in poor minority schools no longer were given advanced academic courses since schools needed to pass as many students as possible and dumbed down the curriculum in both elementary and middle schools to achieve that passing rate.  This resulted in that poor, academically proficient Black and Latino students were at a disadvantage when it came to competing with manly middle class White and Asian schools.

Add to the disadvantage that poor Black and Latino students had due to the elimination of academic tracking, was the overall poor academic performance of their schools,  when compared to the middle class Asian and White schools in the better neighborhood where more academic challenging coursework were offered.  Then there was the test preparation courses that were offered and costs a thousand dollars or more that was not affordable to poor families.

While Mayor Bill de Blasio and Chancellor Richard Carranza want to integrate the specialized schools, using the Texas model. (top ten students of each middle school are automatically accepted), not all middle schools are the same.  Adding more Black and Latino students will result in less Asian and White students who are academically superior to those accepted and that's not fair either.

My solution would be to bring back academic tracking by having all elementary and middle schools to have gifted and talented and special programs that have academically challenging coursework that will increase Black and Latino acceptance rates in the specialized schools.
Posted by Chaz at 12:05 AM

You are correct in that black and latino students (especially) are all together in wildly different ability mixes in class. Any person with half a brain can see that if you have a total knucklehead sitting next to an honest student who just wants to study, that the knucklehead will steal the show and set the tone.

The eggheads, in the name of social justice, think that the opposite will happen, which never really does. A few years ago, seeing some of my more capable students languishing a see of knuckleheads, I sheepishly suggested to my AP that we could create a class for more advanced students.

With a straight face (and a look of revulsion on her face) she replied to me, "That would be elitist!" Social justice warriors live in a dream land, and real people are suffering on account of them.

I believe that the main reason these two groups have the lowest rate of acceptance is because middle schools that primarily serve these populations are generally not up to par. I have worked in two middle schools (south bronx and central harlem) and both of these schools were absolutely terrible. The teachers were either new, incompetent, or both and did not have the capacity for self-reflection necessary to improve their teaching practice. The admin was also incompetent, targeting teachers who did not perform up to their "standards" but never giving them the tools to get better. And finally, the need to pass the math and ELA state tests led teachers to impart on students bad formulas and practices that would help them pass the state test but not serve them anywhere else in life. Couple this with home-lives that were frequently unstable (note: I said unstable, not unloving) and a terrible school environment and you have a recipe for failure. The DOE fails these students in every aspect.

When you have a culture that does not value education or parents who are not involved then schools in the poorer neighborhoods will never be on par with schools in predominately middle class neighborhoods. Schools in poverty areas often offer FREE tutoring and test prep but few of the students take advantage of them. Schools aren't the ones to be fixed. The parents and the culture must put education as a top priority. Since this will never happen then many black and Hispanic students will not reach their full potential. And these progressives need to admit that the real problem is in poor parenting and students who do not care. Why ruin the best schools????

TWEED EDUCRATS LATEST IDEA:
"We should have the kids compete for the specialized high school seats like in the hunger games."

Chaz not sure if you can answer this but just curious about the percentage of minority teachers/administrators at Stuyvesant HS? Is it just as embarrassing?

Am of hispanic descent and I went to NYC public schools back in the 70s - 80s. There was academic tracking and was placed and encouraged and placed in academically more advanced courses. Would not have wanted a 'knucklehead' (as someone mentioned above) in my classes. It would have wasted time and time is information in school.

Bloomberg also cut test prep in poorer areas to get into top schools.

Smart kids, all over the city, need to be groomed early on so when they sit for the tests, they are ready.

9 32
Shame on you for trashing hard working middle school educators of NYC. Are you kidding me with your politically correct comments that the problem with blacks and hispanics not getting offers in our elite schools is with our middle schools?

Sadly it is the people like you that still want to blame everyone and everything except for the culprits themselves that have eroded livelihoods and quality of life here in NYC.

You are also exactly who I am talking about. You read my comment and rather than reflect on your practice or the teachers around you, you immediately give a knee jerk reaction and claim I am being "politically correct" and trashing educators. I noticed in your comment you did not dismantle nor even mention a single issue I raise. Glad to know that people who are suppose to teach the kids critical thinking skills are unable to utilize these skills themselves.

2:48 please stop with the facts and logic. Next you are going to write that the culture with the highest value on learning (Asian) in NY produces the top scorers on the NY public high school entry exam. PC police will slam that one.

If all children had equal levels of education or parental involvment are you saying that different ethnicities of children will all score about the same on standarized or state tests or all go into Stem fields at the same rate. I guess you believe that all peoples have the same genetics also..

Yes, and the college professors are asking, "What are they teaching you in high school?" It's a domino effect. Colleges blame high schools, high schools blame middle schools and middle schools blame elementary schools. That's because we pass the kids along because we are afraid to fail any kids. Nothing is going to change until they end social promotion. Teachers all have that attitude, "Well I can't reach him, maybe the next teacher will. I'll pass him so he can be someone else's problem next year." No, we can't just blame middle school teachers. It's all our fault.

Do people really believe in equal outcomes regardless of the effort?

This explains why I don't lose weight as I drive passed the gym and go to McDonald's.
According to the anti specialized high schools crowd, it is due to my race! I should be able to eat crap food everyday, skip the workouts but yet still be as fit as those who work out everyday!

Going along with this thinking, are the people who organize the NY Marathon health elitists? They should let me, a Latina female couch potato, win the marathon. How dare they actually expect me to train for such an event!

White kids are only 15% of the public school population in NYC, yet everyone is always screaming racism (from whites) keeping non white down and 'segregation' and all that, and they say with a straight face that the 70-75% of the school population that is black or hispanic can only succeed if a white kid is sitting next to each non-white kid.

With Asian achievement through the roof, will they be the new targets of social justice warriors? Will we start hearing about "Asian Privilege" and how Asians segregate themselves and do not integrate with blacks and latinos? There are rumblings of this now, especially with the specialized high schools issue, even though the news media is working overtime to make it seem like a 'white racist' issue.

It seems that no one wants to look at their own house. Look, I grew up in an all white town, and we had good and bad families all over. The bad families were plagued with social problems like drinking, marijuana, loose living, poor life choices, etc. And the 'bad' side of town the rest of us avoided. No one could say whites were discriminating against whites, even though the better class of people were doing just that to protect their own children from bad influences.

Asians know the importance of this, even as whites have largely forgotten to protect their own children. That's why Asian enrollment in the top high school and even taking over whole neighborhoods in Queens to populate the local schools with their own is so important to them. You only have one chance to raise your kid right. Asians will not compromise. Black and latino parents who also know this look for options too. They have the added burden of white liberals not allowing them escape the lower class people among their own.

White liberals think all blacks and latinos are the same, like a commodity, and do not let them sort themselves out.

I'm also from Hispanic descent, went to school in the 80s in pre gentrified Williamsburg. And I was wondering when did it all go downhill. And you mention academic tracking, omgoodness lightbulb, but of course I wanted to be in the SP class but I ended up in the next class the 1 classes. And we would compete with one another for best grades in any subject. So yes academic tracking played a big part of me succeeding and earning 6 figures today. Right now I would hate if my child was mixed with students who do not want to learn, ugh this just makes me angry.