Integrating The Schools - A Tale Of Two Districts 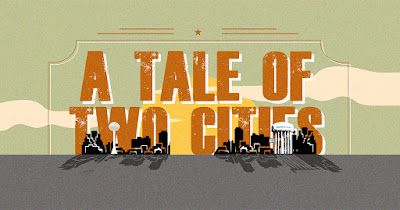 Chalkbeat correctly pointed out why integrating Brooklyn's District 15 middle schools had different roots than District 28 in Queens.  According to Chalkbeat, District 15's integration program was parent led and resisted pushback from other parents.  Moreover, the parent advocacy in District 15 is quite liberal and supports the Mayor and Chancellor when it comes to eliminating the standardized test for the specialized high schools.  Finally, the middle schools had a districtwide middle school screening program that saw many students leave their neighborhood to other middle schools in the district.

By contrast, the proposed District 28 integration plan was spearheaded by the now departed Superintendent who didn't bother to ask her parents what they thought.  The DOE actually promoted her for her incompetence  Moreover District 28 parents in the Forest Hills and Rego Park communities are strongly opposed to any integration plan that require their children to be bused out of their neighborhoods.  Finally, these parents also support standardized testing for the specialized high schools.

In summary, what might work for District 15 is a potential disaster for District 28 when it comes to integrating the middle schools.

Education is not a mystery. It baffles me that people think there is some great secret about being a successful school. Successful schools are that way because of the people who inhabit them.

The location of a school is not a guarantee of success. Location only matters because the people that inhabit that location. I can't simply demand to move into a 20 million dollar brownstone on the upper east side because I think moving there will make me rich. Yet, carry on a lifestyle that does not respect the home, the neighbors, and the neighborhood.

I am baffled that the public does not see or understand that the Deblasio, Carranza, and many of the DOE "higher ups" are trying to ruin all the DOE public schools. I don't know why but money and power always come to mind.

The DOE should spend its billions on improving every school, in every neighborhood, not shuffling kids around to make it look like they are doing something. Of course, cutting the DOE budget and sending all those DOE suits back to the classroom is a good idea. NYC could produce the same failure for half the price.

We are all deeply opposed to segregation - when it was in the south.

People cloud this simple issue because they don't want to share the truth about themselves.

How do you integrate our schools. By race, By income, by geographic location?

The school system is only 15% White and 12% Asian so by race is a losing issue. Will parents of all races and incomes allow their pre teens to travel outside their neighborhood to a poorly performing school? I doubt it.

Integrating the schools is a worthy goal but the reality is that few parents will jeopardize their child's safety and academic potential to travel great distances to struggling schools in dangerous schools just to satisfy the integration goal of the City.

Forest Hills parents are nervous about their 12 year olds, but send their 14 year olds to ride the trains for an hour and a half each way every day?

The resistance is to integration. Not to travel.

True. However, they go to specialized schools and in good neighborhoods. Moreovedr, their is a big difference between a 12 year old and a 14 year old when it comes to traveling alone.

"Moreovedr, their is a big difference between a 12 year old and a 14 year old when it comes to traveling alone" But not in District 2, where kids travel the length of the district to go to preferred middle schools. I even had in my school a girl from Forest Hills who had gone to middle school near Madison Square...

It's not the trip, it's the destination

District 2 is a racially diverse middle or upper-middle class District with high achieving middle schools throughout.

The district is not representative of the City schools as a whole.

But that's the point. The 28 parents have issues with integration, not travel.

Those who want to integrate schools should live in the neighborhood where the school is located. Why be forced to travel across town?

People segregate themselves. You are not forced to live in a particular neighborhood.

Please leave the good schools alone! They are few and far between! Why don't the schools that are low performing better themselves instead of sending poor students along to ruin good schools??????????

Teaching in District 28 it is about both. The combination of the two make it very difficult to convince parents to allow their children to travel great distances to achieve the dubious goal of integrating their schools.

Jonathan is right! In my opinion.

@Chaz...no disrespect but these "bad/dangerous" neighborhoods have many good people living there. They want the best for their children too. What do they get, schools where the teachers don't respect themselves and therefore give packets and perform very little teaching. I get it's out of fear of retaliation but come on people, we are a GROUP of educators. Why not walk together and stand up for something: speak up so that the neighborhood schools can become a place where children and families will know is a place where real learning takes place.

@Jonathan...you're arguments are so valid. It's a wonderful discussion between you and Chaz. So far, I am agreeing with your points.

@6:16am... Income is the strong enforcer that stops people from being able to move. If we continue to provide no education to "poorer communities" the cycle will continue. What happens in "dangerous" communities will revisit itself in "good" communities. Perfect example, drug plague is ravaging the "good" communities and schools. Heard of the crack baby? We will see the opioid baby soon.