Rating The Democratic Candidates Based On Their Education Policy 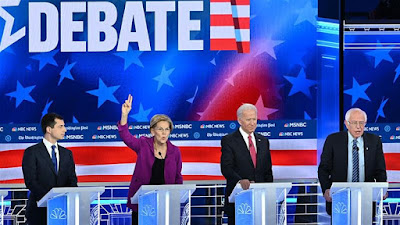 This post is to grade the Democratic Presidential candidates based on their education policies. Obviously,  Joe Biden, Michael Bloomberg, and Cory Booker get a  failing grade for their support of charter schools and their cozy relationship with education reform organizations..

Mr. Buttigieg's education policy is influenced by his husband who is a middle school teacher in a private school and wants to raise teacher pay and ban for profit charter schools.  Unlike Sanders and Warren he is silent on publicly funded charter schools and as Mayor he supported some state voucher programs but claims he is against vouchers now.

Amy Klobuchar's education policy wants to increase teacher pay but supports charter schools as long as they don't steal funding from traditional public schools.  She voted against a federal voucher system as a Senator.

Andrew Yang's education policy is ill-defined but because of his autistic son, he is sensitive to Special Education and wants public schools to be fully funded.  He supports charter schools but has not spelled out his complete education policy.

Joe Biden has a long track record on education and as Obama's Vice President he supported the Obama administration on attacking teachers and supporting charter schools.  He also supported the teacher evaluation system that unfairly blamed teachers for student academic growth.that resulted in many teachers getting terminated nationwide. He gets support from education reform organizations. He is trying to distance himself from Obama on education but who can trust him?

Cory Booker's education policy is ome of the worst as he is a strong charter school supporter and many of his donations comes from hedge funds and Wall Street.  He is the favorite of education reformers.  He would get my lowest grade with the exception of Michael Bloomberg.

Michael Bloomberg's education policy resulted in over 150 schools to close in New York City,giving money to charter schools while under funding traditional public schools and despised the teacher union.  He once suggested at MIT that he supports doubling class size and reduce the teaching staff by half.  He was the darling of the education reform organizations.  Finally, he ignored parents and community leaders when it came to education issues.  See my posts Here.

Tom Steyer's education policy is unknown, except he wants to give every student an equity opportunity but doesn't explain the specifics so he gets no grade.

He has done nothing to us and couldn’t give two
$h!t$ about education. He is the perfect candidate.

You say what about SCOTUS. Ok. Janus was decided
Against us and what happened? Wait for it..big nothing.

MAGA ALL THE WAY. THE DEMOCRATS ARE DONE.

Trump 2020! There are a lot of us. We just can't voice our thoughts at school. The less politicians have to do with education, the better. Politicians just makes things worse for everybody.

Don't forget, Bloomberg also chose Cathie Black to run the biggest education system in the country. He might choose her to be secretary of Education.

There is only one reason, and one reason only, that every teacher should vote for Trump - that would be if Bloomberg,( or really any Democrat, other than Bernie), wins the Democratic nomination. Bernie is our guy. Even if Bernie wins, these are dangerous times. Trump is complete fraud. Trump’s economy is based on debt - debt that isn’t secured by gold or silver - a thinly stretched ballon that could Pop! at anytime. There are also going to be concerted cyber attacks planned on our financial institutions - stop putting all your financial business on-line and get the fuck off Facebook NOW - stop posting all your and your family’s personal business - it’s beyond stupid and very dangerous. (Also do not any circumstance send your DNA anywhere to get tested , your DNA becomes someone else’s property that can be used against you and your family you in a myriad of ways - in the near future, very frightening ways.) To be safe buy a gun (or here in NYC, it’ll have to be a rifle) and some gold. I’m not joking and I’m not nuts, regardless of what my wife says.

I am a Democrat, but it was the neo-liberal Dems who created and presided over Race to the Top, over all the anti-teacher Cuomo an Bloomberg [yes Mike changed his political labels] actions, over charter school expansion.

Jeb Bush, who was supposed to win in 2016, would have done the same.

Trump not interested in public education except to placate his base - put prayer in schools, things like that, and let his friends make money off schools.

yes there are a lot of us who have to keep silent in this dreadful liberal city..Pay attention look at who is running NY dumb and dumber DBLAZIO N CuoMO ...democrat n democrat

How was that great Obama policy of sending cash to the Iran Regime doing?
Trump sends a few missiles( not cash) and all of a sudden Iran is in deep SHTTTTT Them idiots shot down their own plane and want to blame Trump....Trump 2020 and you will see other nations respect and fear the USA again #MAGA

To all those posts supporting Trump...Policy wise, TRUMP hasn't tried to foist Ed. reform policies on states and cities like Bush and Obama did. But in one way Trump is MUCH WORSE! Trump's tax reform limited the SALT deduction for NY residents which makes it a lot more difficult for state and municipalites to raise taxes to fund schools. This will hurt a lot more as the years go by and more families and businesses leave NY further eroding the tax base. The ongoing exodus of families from the NYC area has already started which has
decreased enrollment in many schools.

at 7:00 pm hate to say it-but you sound like the sanest guy in the room.

Perhaps the most outrageous piece I've read this week - and there's been many outrageous statements this past few days - concerns Doomberg and his campaign. From this morning's NY Post, "In a 13-minute stump speech, Bloomberg recalled his efforts to raise teacher salaries and cut carbon emissions during his three terms as New York's mayor."
Funny, I don't recall it at all and I was a teacher during his three terms. As per cutting carbon emissions, I do remember him taking his private jet to Bermuda every chance he got, and snapping at any reporter who asked about it. I remember a Mayor who refused to even negotiate a contract for his last illegal term. He was the mayor who wanted to fire wholesale veteran teachers, and hire non-educational administrators to run schools. By the way, isn't every speech little Mike gives a stump speech?

According to the NYC DOE website, the DOE budget is 34 billion a year plus an additional 17 billion for capital projects. The DOE is an astronomical failure. This is a local failure, noting to do with President Trump. I agree that the limited SALT deduction is aggravating. The local corruption, mismanagement, waste, lack of leadership, liberal policies, crime, etc. are motivating people to leave NYC.