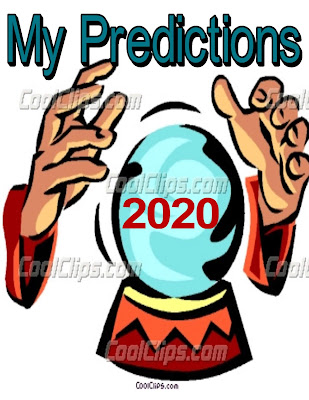 The education issues for 2020 are many and some of them are complicated.  Here is my best guess.

School Integration:
Chancellor Carranza would like to integrate the public schools and despite some limited success in certain school districts like District 15 in Brooklyn  and District 3 in Manhattan.  Most of the Districts are either highly segregated or resistant like District 28 in Queens.  I expect little progress in integrating the NYC shools without causing large scale middle class flight and expensive busing to implement the Chancellor's wishful policy.

Class Size:
Mayor Bill de Blasio will probably not support lower class sizes unless the State fully funds the schoolz but with the State expecting a major budget shortfall of 6.1 billion dollars, the Mayor will shortchange the schools by only funding them at 90%.  The result is that class sizes will continue to be the largest in New York State.

Fair Student Funding:
I don't expect the DOE to eliminate school based fair student funding since many of the Bloomberg holdovers remain in policy making positions, despite some small changes by Chancellor Carranza..

ATR Pool:
Look for the ATR pool to continue at current levels as a result of the fair student funding and hiring practices that discriminate against veteran teachers.  I also do not expect an ATR buyout this year.  The DOE pilot program that allows the worst schools to hire an ATR without being charged might be expanded to other terrible schools that no self respecting ATR would accept.

Prehistoric pedagogue said...
This comment has been removed by the author.
4:02 PM

I agree with most of those predictions- esp fsf.
I hope the DOE offers a retirement incentive for tier 4 teachers over 20 years but they know they would be stuck with a teacher shortage if they did. they could place the ATRS into those vacant spots, and i still doubt they could fill the positions.
one can wish though.

My predictions:
The Board of Education will still do the same thing they did last year. Beat up the ATR’S.
The teachers will be like sheep and let the administration beat them up.
A buyout and nobody will take unless you going to retire
Anyway.
We will still complain

Why not just tell the fucking UFT no more dues until you pieces of shit start doing your jobs? No dues motherfucker Mulgrew and you can tell your skank mother Randi the same thing.
- Every Fed Up Untenured Newbie, ATR and Targeted Veteran Teacher

SOS
Same old ......
And addition of more pandering to poc if you are white.
Pass em all

It's not surprising that DC-37 and the UFT have had the largest number of dues-paying defections over the last year. It's great not having to pay union dues to a failed Weingarten/Mulgrew enterprise.

@5:29 This is a blatant lie. The UFT absolutely has not had the largest number of due-paying defections. Whether people support the union or not, most members don't even realize there is an option to opt out of paying these dues. Please provide the source for this information because it is clearly bogus.

1:48 Opt out and the UFT will destroy you by programming their butt buddy-the doe- to come after you. It's similar to filing a grievance or faliing students who don't deserve to pass---your ass will be crucified for not being a sheep.

I just retired after starting terminal leave on April 1st LOL. I haven't finalized my pension yet. They pay me an estimate of what it should be. Do I even pay UFT dues still? If so, what would I lose for stopping them? I only worked 21 1/2 years in the classroom. My birthday is at the end of August. I started September of 97 at age 33. I subbed a few years before that while owning a business. Teachers who had served during the Cold War told me that my time in the Marines didn't qualify for military credit. Wrong. I had the required medals for Beirut. I bought that back at the low salary I started at. I applied for sub credit. Again, the veteran teachers said I wouldn't get much, if anything, due to the rules on consecutive days of subbing. Wrong again. I bought back that 2 years, 5 months, along with the 3 for Beirut. My terminal leave started 4/1/19, five months before the anniversary of my first day of work, back in September of 97. I maxed out TDA since day one. I went to the VA two days after terminal started. I always worried that my military injuries would have led to me being forced out of teaching for medical reasons, so I worked through them and never mentioned a thing. I was rated 100% service connected disabled. The monthly tax free pay is over $3,300 as a married veteran. That was a huge surprise. With my reflected 27.5 years with TRS, a huge TDA that I can let double within 10 years at 7% fixed, along with the VA disability, I don't think I have to ever work again. The UFT is horrible. I would love to cut off my dues if I still pay during retirement.

Teachers do not opt out of paying there union dues because their prescription drug benefits come from the union. Regarding ATR's, from what I can see, almost every ATR I have come across should be fired. I would not want any of them teaching my kid.

I suppose you've never been an ATR. When they phased out my HS, I wound up becoming an ATR. You seem to live up to the old saying, "A degree doesn't always mean that you possess common sense."

Painting every ATR with the proverbial broad brush. Seems typical of someone who never worked in a tough area, such as East NY Brooklyn. You must have been blessed with a wonderful school environment, where zero classroom disruption takes place. A real Danielson's poster child for sure. 4's in every category. Oh my. You should volunteer to help the teachers in the TIP program. I know, end of year and two thumbs down. Off with their heads. We know those types, all too well. Finger pointers. Ad hominem attacks upon fellow teachers. Brown nosers, etc.

"Every ATR..." If I had a nickel for every time that some Schmuck started a conversation that disparaged ATR's like yours did, well, you know the rest. Then again, maybe you don't. Try to breathe through your nose while you read through the rest.

When we were under enemy small arms fire while in the the Marine Corps Infantry, we used to shout out commands to certain Marines so that they could fill in gaps and support the effort. We NCO's would look over at one our Marines who was a "Mouth breather." That stupid SOB who would get us all killed if called upon to do their job. We would look at him, look at each other, then laugh hysterically while under fire. You can't ask him to bring a crew served weapon into the fray. You had to send a squared away man to take over his machine gun. Like teaching, the number of true mouth breathers are few. Yet in your world, the ATR pool is comprised of 100% of them? I think not.

Those mouth breathers had something in common. They always had a difficult time keeping their mouths closed during inspections. It was as if they had a deviated septum, with a low IQ as well. Forrest Gump's Bubba is based upon those real life characters. Except in the movie, they make him a likable character. That's not how it is within an Infantry unit. They get people killed. We despise their presence and work hard to weed them out.

I voted no on the contract that saw ATR's going before an expedited disciplinary process. Apparently, most of our members voted to allow that miscarriage of justice to sail right on through. Those who voted "Yes", allowed an arbitrary and capricious system to come into existence, for teachers who probably already forgot more about pedagogy, than you had already acquired by that point in your careers, all while still better able to serve their school community than you could yours, in ways that you can't comprehend yet. As some say, “You just don't know, what you don't know.” You don’t know.

I bet you just read this with your mouth open. Something tells me I'm on to something here with you.

IN RESPONSE TO ME: Given your long winded response to my anecdotal observations after 29 years of teaching, it is no surprise to me that you are an ATR. I would not want you sitting in front of my kid. It seems you might be suffering from a little PTSD. I worked and lived in places as violent as you may have served. And I did not have a weapon to defend myself, despite the fact that took weapons away from kids at an alarming rate. Therapy helped me to deal with the violence and hostility found in the inner city classroom. If you have not sought any therapy, I suggest you give a try. Luckily, our health insurance only asks for a 15 dollar copay and has suspended that for the time being. Either way, I don't think you should be in front fo children at this time. Your response simply give further support for my conclusions about ATR's.