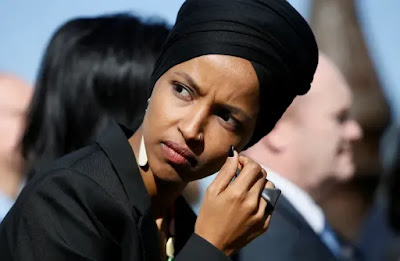 I'm an independent voter and usually vote Democratic but there are some Democrats I will not vote for.  They are the "squad".  The squad consists of four house representatives that are considered far left progressives and out of touch with mainstream society.  This post focuses on only one of these far left progressives, IIlan Omar.

In a poll by a Jewish NGO  representative IIhan Omar beat out the perennial winner Louis Farrakhan and Richard Spenser who were in the top three.  What has IIhan Omar done to get the anti-semitism of the year award for 2019?

2. Alleging that Jews buy their influence with money, infamously stating “It’s all about the Benjamins.”

3. Accusing Israel of having hypnotized the world.

5. Submitting a resolution in the House of Representatives comparing boycotting Israel to boycotting the Nazis.

6. Having her anti-semitic statements endorsed by infamous neo-Nazi David Duke.

The organization also mentioned her refusal to take back or regret many of her anti-semitic comments, as well as the backing she receives from the Council on American-Islamic Relations (CAIR), which is connected to the Muslim Brotherhood.  She also wants to sanction Democratic Israel and wants to eliminate sanctions on the dictatorship in Iran.

The NGO has a video of the anti-semitic tropes Here.

Note:  The NYC schools will be developing a school curriculum  to combat antisemitism Here.
Posted by Chaz at 1:10 PM

Chaz, I'm sure the right win trolls will eat this post up but what does it have to do with education? I read this blog to hear DOE or UFT related news, not your political opinions.

Also, I find it very strange that people (not specifically you Chaz but others on your message board) will use the example of David Duke retweeting Omar as an example of her antisemitism yet these very same people will still support Trump who explicitly stated there were "very fine people" at a White supremacist rally. Not to mention the fact that he received an endorsement from David Duke as well.

Antisemitism is an important issue in our schools, Don't you read and watch the news?

It's my blog and I can write what I want.

You’re 100% correct about her; her views are abhorrent. I wish she’d endorse Bloomberg.

politics plays a huge role in our livlihoods...just look at what bloomberg did to our profession for political pundits....wake up people

You can write whatever you want. That doesn't mean it is useful. Most of what you write IS useful, when it relates to ATR's and Education.

She has made controversial statements sure. I don't know as much about her, tbh, I feel as if those she serves feels she oughta go, they will let her know when they go vote.

Hey, 1:51, sounds like you didn't drink the leftist Kool-Aid, you ordered yourself a Big Gulp of it.

Continuing, where do you get that the rally against moving General Robert E. Lee's statue was a "White Supremacist" rally? That was the biased label slapped on the event by the libbie press. The people marching in protest of the removal of the monument---a record of part of our immutable history, albeit not our best moment---were a mixed group. There were White Supremacists in it as well as other people who simply protested trying to erase our history. Their point of commonality in that march was their desire to keep the statue where it was, not every belief that each held. As is well known with the libbie media, even the presence of one White Supremacist in a rally of many people would have "justified" their labeling the entire affair a White Supremacist rally, nonsensical as that is. But that's the libbie press. Trump's remark of "fine people on both sides" certainly referred to the non-white supremacist members of the group protesting removal of the statue, as he has repeatedly, on many occasions, condemned bigotry and hate.

Moreover, Trump did not solicit any endorsement from David Duke. How could he help if he received one? Is there any record of him thanking Duke for it? As a matter of fact, Trump disavowed it.

The repugnant Ilhan Omar doesn't need any retweeting from Mr. Duke or anyone else to demonstrably prove her vile, rabid antisemitism. In one callous sentence, she dismissed the death of nearly 3,000 innocent people (not only Jews, of course) as "some people (note she does not identify them as Muslims) did something". She has repeatedly condemned Israel, likening it to Nazis, parroting the pack of lies routinely peddled by the Palestinians. She has accused American Jews as having a dual loyalty to Israel, accused the American Israel Public Affairs Committee (AIPAC) of having bribed members of Congress, claimed that “Israel has hypnotized the world”, has supported the Boycott, Divestment and Sanctions (BDS) movement against Israel, and is an ally of the known antisemite Linda Sarsour.

Compared to a single deliberately misinterpreted quote by Trump, I'll take his almost 4 million jobs created since election, the fact that more Americans are now being employed than ever recorded before in our history, the fact that manufacturing jobs are growing at the fastest rate in more than THREE DECADES, African-American and Hispanic unemployment are at the lowest rate ever recorded, the fact that almost 4 million Americans have been able to get off food stamps, over $300 billion has been poured back into the U.S. economy--in the first quarter alone--after the tax cuts initiated, Obamacare is gutted and its penalties are no more, Medicare has been reformed to save seniors millions of dollars from being overcharged for prescriptions, the U.S. Embassy in Israel has been moved to the capital of Israel, Jerusalem, China's chronic theft of U.S. intellectual property has been countered with tariffs, and dozens of other improvements for the lives of Americans, any time.

I don't like Omar or the squad but I find it shocking that she won anti-semite of the year when Steve King is still in office.And speaking of anti-semitic dog whistling, o numerous occasions Trump has claimed that Jews will vote for him because they love money and he's cutting their taxes. This seems like a double standard to me.

Thank you so much Chaz for writing about this scum. Second best thing I have seen this week, first being Ricky Gervais absolutely hysterical opening at the Golden Globes.


@1:43 Bravo could not have said it better myself.

If the media was flipped and the 7 mainstream stations were pro trump instead of hate Trump 93% negative talking points, people would see how well Trump is doing for this Country and the world. I pray AOC, OMar and rest of the squad lose their seats in office.

Blackface Northum still in office as a dem in Virginia and Black face and body Justin Trudeou in Canada.

Did you even bother to read the list of anti-Semitic comments she made?

Who are the people who are sucker punching the orthodox Jews in nyc? Yes. Black youth who go to nyc schools.
It seems to me that these are not packs of Muslims. What's going on?
Are these students making a political statement?

Can anyone explain this behavior?

Anon 5:51. If you can contemplate all the criminally oppressive mercilessly cruel dictatorships
e.g., Cuba, China, North Korea, all the Arab countries, And still feel that Israel is worthy of protest, then yeah you are an anti-Semite

@9:13 Why can't I condemn all of these countries along with Israel? Are we at the point now where you can never criticize one thing individually? You have to criticize everything? I can only condemn the policies of a country if they are relative to the policies of even worse countries? If that's the case, how can you guys continue to criticize the DOE when there's other school systems that are significantly worse? How can you criticize De Blasio and Bloomberg if you "can contemplate all the criminally oppressive mercilessly cruel dictatorships e.g., Cuba, China, North Korea, all the Arab countries"?

Israel is no saint and neither is the U.S. You are conflating criticism of a government with racism. Am I a xenophobe if I criticize Iran and say that the Iranian state is evil?

Why are these black kids attacking Jews in NYC?
Who's teaching them to hate like this?

The UN human rights council includes China Cuba
and Saudi Arabia. The only country that is consistently cited by these paragons is the only Jewish state in the world. If you think that this is some sort of coincidence then you either have your head in the sand or up your ass. All I am saying is that your outrage and protest be doled out in proportion to the evil you are decrying. I think that most fair-minded people would agree that China, North Korea and Saudi Arabia are exponentially more oppressive and evil than Israel. Therefore, if you are not spending at least 10 times more time and effort yelping about the true villains in the world you are probably a low-life Jew-hating prick.

I'm Jewish and don't find what she says all that offensive - some of it but i feel everyone who isn't Jewish is antisemitic in some ways. And of course there's that little issue of the squad endorsing a Jewish candidate for President -- let the Bernie attacks as a self hating Jew begin. Not agreeing with the right wing often racist Israeli government is not anti-semitic especially given the history of so many Jews fighting on the right side of civil rights due to the 2000 year discrimination - just a few years preceding the squad. Does money - Benjamins - affect policy - I'm shocked, just shocked.

Sorry - I should have signed it low-life self hating Jew hating prick.

to 8:20 am and 9:55 pm - there may be a reasonable explanation for this particular behavior - these kids might be doing a gang initiation. When I was teaching in a Queens HS there was a rash of side view mirrors on parked cars being damaged. It was discovered that kids were doing this as part of an initiation.

I am not Jewish but I feel badly when I see members of the Hasidic community being targeted. It is sadly reminiscent of the Nazi brown shirt bullies. The mayor, of course, is clueless.

the squad are not to blame ... I blame the idiots who voted for them..and the ones who will vote for them again...idiots

BTW, re Tlaib, she fools the left by masking her anti Jewish bigotry agenda by using liberal lines and themes... in sheer contradiction to her Islamic "Palestine" belief.