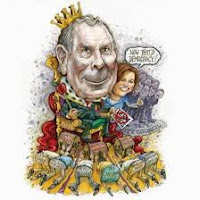 I am glad to see that our UFT President, Michael Mulgrew has finally had enough and has started to publicly respond in the newspapers and television to the Emperor's proclamations. It is long overdue. I have complained that Michael Mulgrew has been strangely quiet about the three core issues for teachers. ATRs, seniority-based layoffs, and tenure and this has led to many an insecure teacher to question the union's commitment to its core values. First, he has allowed Bloomberg to run with the seniority-based layoff issue, commonly known as "last in, first out" to the point that he gave a tepid response to the issue when he met with those misguided stooges at Educators4Excellence. He also has not aggressively defended the ATRs when he knows full well thst the ATR crises was created by the DOE and they can simply end the crises by putting the ATRs back into the classroom where they belong in and reduce the ever increasing class size issue at the same time.

Therefore, it was really refreshing to see UFT President Michel Mulgrew, in the New York Post article, forcefully respond to the Emperor Bloomberg by comparing him to that despot Hosni Mubarak of Egypt. It is time that our union went on the offensive and bring out the "rubber stamp" PEP which is controlled by the Emperor and the wasting of billions of dollars on consultants and questionable programs (Citytime, ARIS, etc.) .

Let's hope the our union President, Michael Mulgrew, has finally realized that Randi Weingarten's appeasement policy does not work and you need to fight back by any legal means necessary like taking out full page ads to not only defend our position but to show the real goal of Bloomberg's "children last" and "education on the cheap policies" a replaceable and nontenured teaching staff who will never last long enough to qualify for a pension.
Posted by Chaz at 12:58 PM

I agree but I can not reconcile the Bloomberg-Quinn Randi alliance. Does Randi still have the juice to control the direction of the UFT? Is Mulgrew left to take a much more militant position? I would like to see a massive union action aimed directly at the mayor. With the mayor going after the PD FD and corrections it seems it could be organized. Close down lower Manhattan for a day. How many thousands of city workers and their families are to be effected by the mayors demands? Or is this all for public consumption? We shall see.

I can only hope that Michael Mulghrew now realizes you cannot deal with the devil. let's see if he does as he claims.

But have you actually heard Mulgrew defend LIFO or just say there should be no layoffs? As for ATRs according to Gotham schools when asked at the E4E meeting he ducked the question - in a forum where he could have enlightened them.

I admit I can be naive butI have heard from some very high up union officials that he will not betray the ATRs or agree to any changes in seniority-based layoffs.

I also believe that he is not an appeaser like Randi and work hard in defending us. However, i am still concerned that his inner circle is still the same old failed group that put us in this position in the first place. I guess only time will tell if Michael Mulgrew is a Meanch or a Wuss.

Wise up his inside group is one person Randi, Hot off the old nose Quinn is meeting with the union head of the PBA and UFA this week. My guess doing Bloombergs bidding. Bet ya Randi will decide the posture of Mulgrew and Co.

Well said anon 2:20 pm. It is very hard to believe that Mulgrew, a handpicked successor of Weingarten, will deviate from UFT long standing policies. At very least not yet.

I've long thought the UFT needed to be proactive in the media. I certainly hope Mulgrew takes your excellent advice, Chaz.