Educators 4 Excellence Is A Cancer To Our Union. 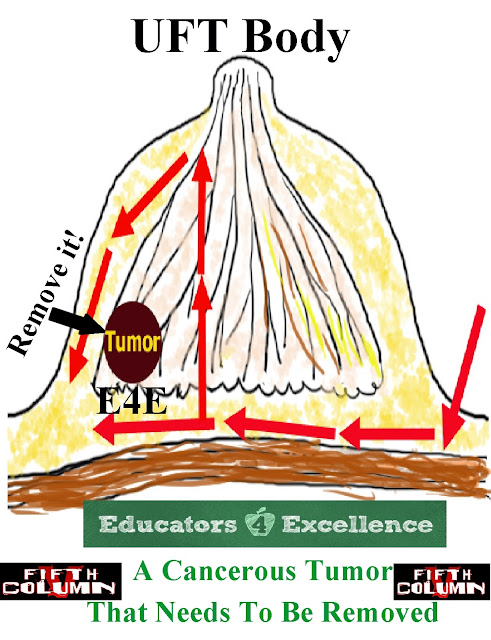 After the aftermath of Hurricane Sandy as the metropolitan area struggles to get back on their collective feet.  Educators4Excellence (E4E) issued one of their  self-serving statements that it was happy that the E4E team came out unscathed.  I guess the sixty people who died in the NYC Metropolitan area, including a teacher at the Brooklyn High School of Social Justice, don't count since none of them are E4E members.  Talking about E4E membership?  How many teachers are actually E4E members?  Fifty? One Hundred?, Five Hundred? Better yet, how many are really active classroom teachers?  I bet it is less than one hundred and of those, most are probably Teach For America "newbies" who can't wait to get out of the classroom and won't be teaching three years from now.  Regardless of how many active members there are in E4E, one thing is clear, this group, or as I call them, a cult is anti-union and gets their funding from corporate and hedge fund education reformer groups.

Time and again E4E is invited to various panel discussions by Education reform groups and has little good to say about our union rights and proposes policies that eliminate many of our  "due process protections". In fact, they are the darlings of many education reform organizations and their policy papers reflect the agenda of education reformers.For example, they supported the repeal of LIFO and were a prime supporter of Mayor Bloomberg's infamous LIFO bill. They also agreed with the education reformers that a merit pay plan should be implemented, including higher initial salaries for "newbies" but no step increases for experienced teachers.  Moreover, they believe the nonsense that a "great teacher" is more important than poverty in student academic achievement.As for the ATRs?  The ATRs should be given six months to find a job or be terminated.

For some reason our union, the UFT, has tried to reach out to E4E and include them as part of the union body.  In fact one of E4E's failed teachers who couldn't even gain tenure before abandoning the classroom, Rubin Brosbe, has his blog included in the union's Unity caucus Edwize blog for NYC teachers.  In my opinion E4E is not like the loyal opposition caucuses like ICE, TJC, or more recently MORE.  E4E is  a union-destroying cult who is a cancerous tumor in the UFT body and needs to be removed from our union.    E4E is a "tool" for the corporate elite who control the eduction reform agenda and is a danger to all teachers and it is the union's responsibility to kick them out before E4E's fifth columnist activities destroys the union from the inside just as cancer does to the human body.

South Bronx School and Accountable Talk  have many more articles about E4E and they are a must read.
Posted by Chaz at 1:34 PM

My wife, sister, sister in law and myself are all teachers. My mother is a records secretary. There are well over 200 teachers in my building and although I have spoken to many - certainly not all, I have never run across anyone who personally knows a member of this bogus group - this includes the people my wife, sister, sister in law and mother work with as well. Trust me - I have asked them in the past. Your post is well stated Chaz. Keep up the great work. Be well.

Chaz, I commented on your post via the "Accountable Talk" blog. You made a comment about forgetting to mention how to avoid the reality of poverty affecting student achievement (all in sarcasim of course). I posted that I couldn't help see the politicians all walking in the devastated areas Sandy hit hard as in some way mirroring teachers and in a way having "the tables turned" on them. Poverty too is a tragedy and it is something that many teachers in the system see everyday yet we try our hardest, give it our all and still come up short at times. I saw the politicians and the utter frustration and pain of the victims of this terrible storm and couldn't help but think that the politicians cannot find a miracle cure for all of this - yet so many of them lay blame on us for not fixing the tragedy of poverty that affects many of our students. I don't know - maybe a possible idea for a future blog of yours.

Also, I took the time to read the letter you referenced, rather than just your post. It seemed to me that it was a nice gesture to reach out to people who might have been affected by the storm to wish them well and let them know you are well too. I got a similar message from Cole Haan. Does that make them a cancer as well?

A cancer, no matter how small can kill the host body and E4E is a cancer to our union. You did not read their self-serving letter stating how well they fared in the hurricane? We3 obviously see the E4E letter very differently.

By the way, who or what the hell is Cole Haan?

Chaz is right. Even if there are only 50 members, they are high profile and are always invited on television talk shows where the sprout their poison.

They are a cancer and needs to be removed!

Are you a E4E member? It certainly seems you are by your response to chaz's post.

E4E is the enemy when it comes to teacher rights.

Not sure if you guys saw this, but a Manhattan principal who makes upwards of 140K was busted for shoplifting from the Home Depot and is,you guessed it, STILL ON THE JOB!!!!!!!!

Why our union allows for teachers to be humiliated and scapegoated for everything, yet sits by ho hum i will never get!