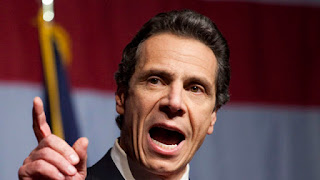 In a Tuesday afternoon news conference, Governor Andrew Cuomo blamed panicky drivers for the long gas lines in the New York City Metropolitan area.  However, the real problem is that the gasoline distribution system is broken.  At my school in Queens there are six high volume gas stations within walking distance and only one of them had gasoline and they were limiting it to $20 per vehicle.   Further, when I returned to my Long Island community the five gas stations in the area had no gasoline!  That means of the eleven gas stations I saw, only one had gasoline for sale despite all the stations having kept their electricity throughout Hurricane Sandy. 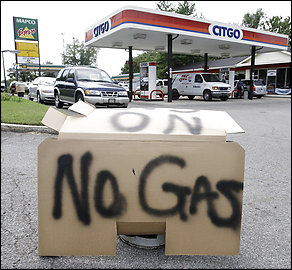 The real problem is that these gas stations are not getting gasoline delivered to their dry gas pumps.  If we are to take the Governor's word that there is plenty of gasoline available at the refineries and fully loaded tankers are coming into New York Harbor continuously, then the gasoline supply problem is the lack of trucks delivering gasoline to the community gas stations. Is it any wonder that what little gasoline is delivered to a community gas station, drivers quickly line up?  If all the gas stations received deliveries of gasoline, there would be no panicky drivers and long gas lines.

Governor Cuomo, it is not panicky drivers but the lack of gasoline deliveries that has caused the long gasoline lines.

How is it people on LI are able to find a gas station, and my local Queens station is closed???

There should be some type of steps we the people can take against this hostage situation ( not ensuring the necessary means for the city of New York to receive gasoline in the area). We are not asking for a hand out. Many of New Yorkers use their vehicles for the purpose of work and school. These officials should never assume everyone in this city uses public transportation(MTA)as a travel source for work or school. I am disappointed by their attitudes and approach towards the seriousness of this ongoing difficulty of the gas shortage. What I believe will soon happen in a day or two is deadly chaos. People need to work, pay bills and take care of their family needs. We all know that Sandy took many jobs away and placed a strain on many people trying to reach their jobs in the first few days after the storm, but it does not help the situation when one has to spend 3 to 6 hours trying to find gasoline to get to the job. When needs are compromise, there are no more law bidding citizens. People can become outright savages when their respect and dignity for self worth is taking away. These officials are forgetting the most important piece of this puzzle and that is we the residing people are the beavers of this city. We build and work the land to make NYC to what it is today.

Why is it easier to find gasoline in Westchester or southwest Connecticut, where people are still acting civilized and waits are between 5 and 15 minutes at most???