The Biggest Losers After Hurricane Sandy.

After Hurricane Sandy has wrecked damage to the New York Metropolitan area, there are no winners, well maybe President Obama got a bounce being in New Jersey with Governor Christie.  However, there are many losers.  Here is my list of the biggest losers.

People on the Eastern Shore of Staten Island and the Rockaway Peninsula: 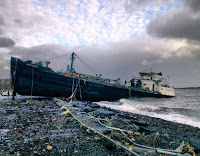 Ten thousand people have been left homeless due to the storm surge, strong winds, and fire.  Both areas look like they will not being returning to normal anytime soon.  To a lesser degree, many people near the water on the South shore of Long Island and the New Jersey Coast also saw their houses either flooded or taken off their foundations by the storm surge. However, nothing like the damage and destruction experienced by the two communities.

Thousands of People now jobless:
Many businesses have been destroyed due to the storm surge and flooding and thousands of people lost their jobs for the foreseeable future. In the Rockarway Peninsula almost every business were affected and many may never open again.

LIPA:
Over one million people lost power on Long Island and the Rockaway Peninsula and as of tonight, There still are 400,000 people without power, including almost all of the Rockaway Peninsula.  The failure of LIPA to have strengthened their electrical grid system after being devastated by Hurricane Gloria in 1985 is unacceptable.

Only the NYC Metropolitan area has experienced a gasoline shortage.  Gasoline is plentiful in areas that were harder hit than NYC, like Atlantic City.  In fact New Jersey Governor Christie stated that south of I-195, gas was plentiful and North of I-84 the same was true in New York and Connecticut.

Chancellor Dennis Walcott:
The only time he has appeared in this crisis is when he is standing behind the Mayor in his press conference.  The Chancellor has been relegated to being a non-entity and it was under his inept leadership that principals and teachers were sent an email at 12 midnight by the DOE  to tell the time to show up in school at 10am to do nothing the next day.

Overall, we all are losers but these are the biggest losers of them all.
Posted by Chaz at 8:25 PM

I agree with you on your list but you forgot one other person. The Mayor who told us that the City did not need any help on Saturday before the hurricane hit.

I agree however, the sad thing is that it isn't over yet. More losers to come so keep that list open.