But Can They Teach? 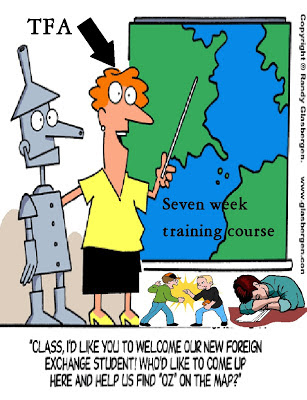 It is interesting how education reformers praise Teach for America (TFA) which brings graduates from the top colleges to teach in high poverty areas, including New York City.    However, in the next breath these same reformers complain that many of these very same high poverty schools have the most teachers rated "unsatisfactory".  I would not be surprised that an analysis would show that many of the "unsatisfactory" teachers were TFA teachers.  Moreover, the combination of TFA teachers with "Leadership Academy Principals" is a recipe for disaster and I wouldn't be surprised if a closer look at these schools showed just that.

Many of the TFA teachers last just two years and use their limited teaching experience to "jump start" their career in business, law, or Administration.  They are increasingly looked at as "temporary teachers" and never gain the necessary experience to obtain the  curriculum knowledge and classroom management skills to gain tenure or spend enough time in the classroom to be considered a "great teacher". Examples of this are found in the leaders of the "Educators 4 Excellence (E4E) organization, founded by Bill Gates, and other hedge fund managers. These "fifth columnists" seem to move out of the classroom as quickly as possible and many are not even there long enough to be granted tenure.  However, this does not stop them from claiming how they know what is best for our schools and students.  What a joke!  In New York City these TFA graduates obtain all, of seven weeks of training and nobody, except for Mayor Bloomberg and his poodle, Chancellor Walcott, really believe they make a difference.  We all know they are simply warm bodies to throw in front of a classroom with a low enough salary that principals could afford on their tight budgets.

Schools with large amount of TFA teachers are unstable and provide no lasting academic impact on the community and their children.  The constant teacher turnover makes it virtually impossible for students to thrive in such an unstable school environment.  In fact, one outstanding educator who is known to favor issues advocated by the education reform movement has now realized that the TFA with its  temporary teacher turnover is "the problem and not the solution" when it comes to raising the academic achievement of high poverty schools.

Teaching is as much an art as it is a skill .  While, I do not question the intelligence of these TFA teachers, I will say this it takes anywhere between three and eight years to gain teaching mastery in the classroom.  Since these teachers spend three or less years in the classroom, they never achieve mastory in the classroom and never will become the "great teachers" that the education reformers claim they want.

The question we should be asking to the TFA teachers is "but can you teach for the long term and make a difference"?  It appears, for the most part, the answer is a resounding no!
Posted by Chaz at 8:37 PM

How true! I work in a small school with one of those principals. The entire staff is not tenured, except for two of us and quite a few are TFA. In my five years at the school, I have seen an over 75% teacher turnover and a very unstable school environment.

I would leave but I make too much money and my job search netted not one interview. Therefore, I am watching living history on why schools like the one I am in fail the students.

Oh by the way my school has a 70%+ graduation rate and a single digit college readiness grade. Talking about a real disconnect here.

With a 70 percent graduation rate sounds to me like your students are ready for the challenges of higher academic learning. It appears that your teachers are doing an excellent job. Oh wait a minute I forgot that your school has a single digit college readiness rate. Guess I was wrong.

I believe what Anon 8:06 is saying is that there is or was massive "credit recovery" that allowed many students who were not academically qualified to graduate.

With the new "credit recovery" rules in place that may change, assuming the DOE enforces the rules.

Nice cartoon and so very true.

The question to all the TFAs is can they show students how to click the correct answer in Aventa?

The TFAs have come into the teaching profession to mock its longevity of staying in the classroom for 20 to 30 years, and to bring derision to those teachers who in the profession a lifetime.

If they wanted to stay in a profession for a short amount of time, then they should work in McDonalds or Burger King.

Teaching is a lifetime profession, never to be treated as a part-time career.

I agree with you on TFA. However, the real enemy are these education reformers (Bloomberg, Klein,Rhee, etc.) who use the TFA to pursue their own political goals in destroying the public schools as we known it.

The Sunday Daily News has an article about PS/MS 4 in the Bronx which leads the city in "U" ratngs - 34%. This principal especially likes to target older, tenured staff (the few that remain) because, as every one knows, these unsatisfactory old timers are expensive.
This guy scares people away. He rated an AP unsatisfactory due to attendance even though her absences included attending a funeral out of town.
This guy once showed up on Halloween dressed as a woman. Nobody thought that was odd behavior?
The News, a paragon of journalism and exemplar of the first amendment, sees nothing wrong with a one third turnover. What business would routinely turn over one third of its employees.
I think that this principal's Leadership Academy diploma should be revoked.