It Appears That The ATR Agreement Is A Failure. 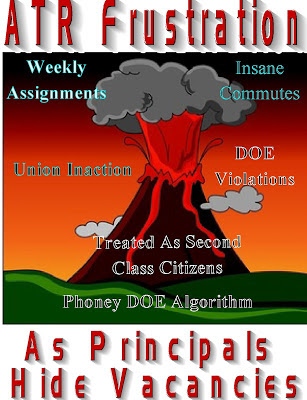 Back in June 2011, the UFT and DOE crafted an ATR Agreement that required principals to hire ATRs for vacancies and long-term (30 days or greater) leaves that existed in their school.  However, the DOE chose to thumb their collective nose at the ATR Agreement and ignored union complaints about principals violating the ATR Agreement.  Like almost all UFT/DOE agreements, the ATR Agreement lacked enforceability and the union eventually filed a grievance that the DOE was not living up to their part of the ATR Agreement.  Despite massive principal violations, the ATR population shrank to 831 by April of 2012, thanks to a two-year DOE hiring freeze.   In the fall the DOE, not wanting the Arbitrator to rule against them, agreed to enforce the ATR Agreement and told principals that they must staff their long-term positions and vacancies with ATRs.  According to Michael Mulgrew, there will be few ATRs whom would travel weekly to different schools with the implementation of the DOE enforced ATR Agreement.  How wrong he was.  What he didn't take into account was the DOE's lifting the hiring freeze and principals still refusing to comply with the ATR Agreement and suffered no consequences for their actions by the DOE. The result is that the ATR pool jumped to 1475 as of the winter of 2012-13 from 831 at the beginning of the Spring in the 2011-12 school year.

The increase of ATRs this school year can be attributed to the DOE's lifting of a hiring freeze which resulted in the hiring of 3,500 teachers.  According to Michael Mulgrew at the January 17th Delegate Assembly, already 1,000 of these new hires have left the system.  However, did ATRs replace these 1,000 teachers?  The answer is no and it is very evident that the principals have ignored the ATR Agreement and continue to do as they please. While the union seems to be too busy with the teacher evaluation issue to publicly complain about the apparent violation and non-compliance of the ATR Agreement by the DOE, the abuse to the ATR rights continues.

While it is far too late to see a significant change in both our union and DOE policy with regard to the ATR.  I can only hope that when the union negotiates a contract with the next Mayor, it should require that all ATRs be placed into classroom positions and use the November 2008 ATR incentive that allowed Principals to hire ATRs at "newbie teacher" salaries with the DOE picking up the difference.

Thanks to blogger Francesco Portelos for stumbling upon the spike in ATRs for this school year.
Posted by Chaz at 5:10 PM

I would think everyone will be placed with the new Mayor...that is...if Napolean chooses,to finally leave.

Personally, I thought it was a failure the first time I heard about it, before it was enacted. It's gratifying to know I was right about something.

Thanks chaz. I was wondering why the union was very quiet about the ATR issue.
Now I know why. The unioin knew that the DOE was still not living up to the ATR Agreement and didn't want to look powerless to the rank and file, especially the ATRs.

In my travels I have seen many schools, most of them the Bloomberg small schools, having day to day subs running a classroom and according to the teachers in the schools, the principals don't want the ATRs because they are "bad teachers".

I told these teachers that this is not true that the principals don't want to pay the ATR salaries once they are covering the vacancy or long term leaves.

Chaz, thanks for the mention. Here are the resolutions passed for ATRs: http://www.uft.org/search/apachesolr_search/absent%20teacher%20reserve

Worthless though if not enforced. I notified union of long term sub this year. Started on day one. Still there which would be ok if all ATRS on Staten Island have been placed.

Any insight into how the number GREW between October and now?

And no deal will fix this situation, without:
1) returning to unit costing
2) ending Fair Student Funding
3) restoring seniority transfers

but I'm not opposed to deals that make things less bad, in the meantime.

It appears that the principals have been told that they do not have to hire ATRs for their open positions. I must assume the orders came from the CFN and the few ATRs that were hired in September were replaced by "newbie teachers". How else could the number of ATRs go up between October and January?

Maybe you need to ask the union leadership why they are not on top of this?

Principals like ATRs for what we are(cheap labor, only there a week and we can cover a position at the last minute and the principal ditches us in a few days and gets a new one).

I do not believe for a second there are 1475 ATRs. I believe the amount is higher

The number came from the DOE and since our union has been quiet about the ATR numbers, it is the only one I can use.

Of all my ATR friends, I do not know of one, not one who has been picked up by a Principal for a vacancy. It is another case of our union claiming victory when the reality is so very much different.

we will never be picked for vacancies. never. principals hate us for vacancies, but will use us for coverages b/c we do not cost them a dime.

i have gotten along w/ principals, have not been abused in my mind, but when i ask principals about possible vacancies, they can't get away from me quick enough

We can only hope that the new mayor will reinstate our ATRs who actually are the BEST teachers in NYC!!!
Quite the opposite of what the klein era brought upon others.