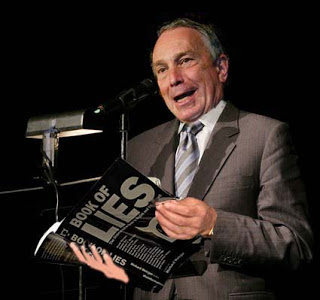 It now seems likely that there will be no teacher evaluation system, at least until after the UFT election in March.  Despite the union and the DOE coming to an understanding on what the teacher evaluation system will have.  Mayor Bloomberg and Chancellor Walcott vetoed the proposal, primarily because the Mayor demanded no "sunset provision" and the Chancellor apparently didn't like the enhanced and expedited grievance provision after allowing his Tweed administrators to approve it.

At first, it was difficult to know who was telling the truth our union leadership who keeps secret any agreements until it is too late to object and likes to keep its members clueless to what is actually going on or the Mayor, who is known to lie time and again based upon his political calculations.  However, it has become increasingly clear during the day that the Mayor has lied and the Chancellor is trying to claim no agreement was made despite the CSA president Ernest Logan saying there was one with the DOE until the Mayor intervened.  Furthermore, State Education Commissioner John King admitted that the draft sent to him by the DOE contained the "sunset provision".  Read Leo Casey's article about the last minute negotiations here.

Apparently, the Mayor squashed the UFT/DOE agreement when he found out that the two sides agreed to the "sunset provision" of two years at which time the two sides could revisit the results of the Teacher Evaluation System and make the necessary changes to ensure that the system is fair.  Instead the Mayor demanded that the Teacher Evaluation System be made permanent with only changes being made by the DOE, with the UFT having only an advisory role in the process.  In other words, a teacher termination program, especially for highly-paid veteran teachers.  In the Mayor's world it is "his way or the highway". 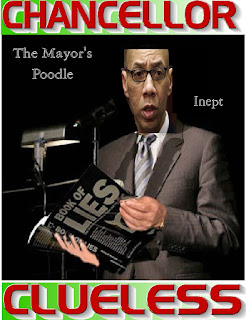 The Chancellor, in a letter to the Principals, made no mention of the "sunset provision" but claimed that he disapproved of it because it reduced Principal decision-making and took away their authority.  The letter can be found at Gotham Schools   Moreover, the Chancellor does vaguely admit that a Principal Evaluation System was agreed upon but he claimed that the DOE needed both agreements not just one. Finally, the DOE tried to sneak in at the last  minute, a scoring rubric that would maximize teacher "ineffective" ratings and gave the union only 24 hours to analyze the numbers. yet the Chancellor parroted the Mayor's complaint that it was the union that added the revised information and delaying the process. Realistically, the Chancellor is simply the Mayor's poodle and whatever the Mayor says is what the Chancellor does and if that means to lie on demand, so be it.

It now turns out that over 90% of the State approved Teacher Evaluation System has a "one year sunset provision".  Not the two years offered by the UFT, and the Mayor  called those one year sunset provisions a "sham".  However, no school district in the State has agreed to an indefinite time period.  Yet the Mayor demands one so that his legacy would be to put in place a permanent teacher termination program. Not now, not later, not ever!

It is time to move away from the destructive Teacher Evaluation System" that incorporates "junk science", student growth factors that are undefined, and will adversely affect teachers with a challenging population. Our union should start from scratch with the next Mayor and start with a new contract that contains the "City pattern",  including full retroactive pay before agreeing to any Teacher Evaluation System.

The UFT agreed to such a teacher firing system. It's Bloomberg who turned it down because of the two year time limit. it is coming faster than you think.

I agree with Tom Humes. i have seen such a lot of meaningless blogs, while i get a lot from this blog. Thanx
Septorinoplasti

The union is still going to roll over, just watch

I hope that the lesson observation process will play no part in the new teacher evaluation system.

There are no facts and statistics in observation reports according to a New York appellate court.

in midwood high school there is first nice pricipal david cohen now why you change priciapal from there i need old one pricipal now my nice pricipal went to http://tarrytown.dailyvoice.com/schools/irvington-names-new-high-school-principal i need this pricpal in midwood now i get new poor priciapl in midwood high school now i get Michael McDonnell
Principal, Midwood High School he not take care off anything please change for me i am good student thank god bless you