Chancellor Carmen Farina's Actions Show Its More About Babysitting Then A Child's Safety Or Education. 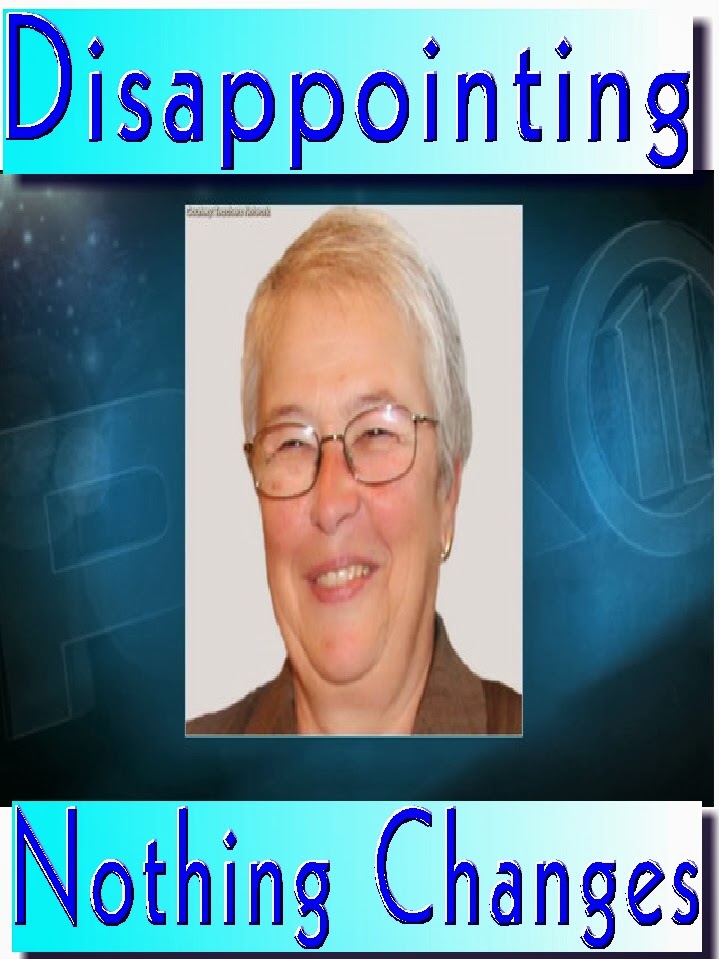 Chancellor Carmen Farina has made a second poor decision in not closing New York City Schools today.  Despite the Mayor declaring a "State of Emergency" the Chancellor decided to open schools anyway. The New York City schools was the only school system that was open between Philadelphia and Boston according to numerous reports  I guess the Chancellor believes that, parents depend on the City to keep the schools open since they can't afford "babysitters" when they go to work and that's more important than a student's safety..  Therefore, closing schools due to dangerous weather under the new Chancellor is the same as under the Gulliani and Bloomberg Administrations.  How disappointing!


I was an optimist and expected that Carmen Farina would do what's right fror the students.  That is

making sure their safety concerns are the most important factor in having students go to school.  How wrong I was, she ignored the problems the students had with the brutal cold with windchills below zero and snow covered roads and that's unacceptable. The majority of students wisely stayed home today and many of the students ended up in the auditoriums to watch movies for the day.  The high schools averaged less than 25% and approximately 50% of the staff did the smart thing and stayed home.

I guess under Chancellor Carmen Farina, the more things change the more they stay the same and that is greatly disappointing.
Posted by Chaz at 7:17 PM

I agree with you that they made a bad judgment call with opening up schools today.

However, I do disagree with the Far Rockaway school issue. There is a new administration; try to think of different avenues and alternatives as to why they may delay yanking her until they are ready to remove Marcella Sills (which I am sure she will be gone soon).

Keep in mind that Carmen Farina resigned/ retired in 2006 when this went to Tweed Hall.

Newark Public Schools were open, but not Newark charter schools. I went in. It was like a ghost town. Christie called a state of emergency and Newark is a state run district. I don't get it.

I'm a high school teacher in Brooklyn. Today was pretty ridiculous and I feel the same way you do Chaz. There was about 25-35% attendance and most kids left by noon because if the boredom. I don't think the chancellor knows that over 50% of teachers live outside nyc and there was no way most were driving. You can't blame them either.
Anyway we had a great day babysitting. We combined classes to fill the rooms because there were no subs or ATR's. This went on in many schools. There was no way to have meaningful classes or any type if instruction due to the combining of classes. We played chess, hangman, went on computers, and other tasks just to kill time. It was a great day Not to take off actually. It was pretty much a free day. Looking forward to some more babysitting days in February, preferably the week before and week after the winter recess.

Anyone see the subtle racism of NYC's long-standing policy to never close schools even when the streets are such that almost no kids can actually make it to school? I have a friend who says he had a grand total of 17 kids in his classes today.

It implies that unlike the parents in Long Island, New Jersey, Connecticut, and wherever else, parents in NYC can't be trusted to find adequate child care for even one day? So ... even if the parents have to work, there's absolutely NO ONE they can count on -- not a friend, a relative, NO ONE. This is belied by the fact that attendance is so low on these kinds of days. That to me indicates that most parents in NYC do, in fact, find a way for their child to stay home (presumably supervised) on such a day.

They don't ever assume in Long Island that on a snowy, icy, sub-zero day, the parents will just let their kids idle at home dangerously unsupervised so the only solution is to keep the schools open as daycare for the day. It's like making an assumption that NYC parents are bad parents because so many of them are poor or minority.

Maybe I'm reading too much into it but that's my feeling of why they almost never close NYC schools.

Hard to believe Chaz, but you are unfortunately correct

3 hours drive home on Tuesday. 3 hrs to work on Wednesday only to have 4 students show up. At least they received truly effective teaching and attention. Then 21/2 hours home.
Nice

great point, chaz, it's more about babysitting for kids than teaching them. we are daycare, not schools

will anything ever change at the doe...i love diblasio and farina and so im giving them the benefit of the doubt as they have just started their tenures, however, the doe is so corrupt and dysfunctional that it will take some time,,,bloomberg with his fake chancellors who needed political approval have infected the system with cockroaches so it will take some time to disinfect. lets all stay strong together and hope the cleansing of the doe makes life a bit easier for us all

Unfortunately the reason diblasio and farina decided to keep the schools open was due to the low life media that exists in NYC. Diblasio and Farina was concerned that if they closed the school again after already closing the school during the last snow storm, that the low life media would have headlines that Farina and diblasio close schools every time it snows and good ole mikey bloomshits NEVER closed the schools...So while I applaud the Farina Diblasio team and love having them here, however they have the daily news and post bloomberg controlled middle eastern dictator media that is looking to write trash instead of supporting the mayor and giving some true journalism and independent reporting. We all know bloomterd was poison and we all know that he was as fake as a 3 dollar bill. We all know that bloomterd is still hanging around pretending to be silent but the scum is still manipulating the press to boost his sick maniac ego. So, if the post and daily news trash want to give new yorkers the garbage they have been spewing for the last 12 years go ahead your just wasting ink because the reading level at the daily news and ny post is 3rd grade level!!!

The question is why do parents send their children? Keep them home!

If DeBlasio is going to run this city in fear of bad press and newspapers that cater to the Bloomberg ideology we are in deep trouble.

Lol, just hilarious as the ball keeps bouncing along. So , let me get this straight.. We are worried about a freaking snow day? Jeez.. If that's the only sign of poor leadership or bad omen , I would say we are in good shape. Let's look at the multitude of disasters first) the damage wrought under our beloved previous mayor.. Sparky bloomberg ..ripping apart the structure of the system with no solid plan in mind how to replace what was broken . And the best part..nobody in charge to handle it ( shout out to Walcott .. Who had the biggest embarrassment take place in his district @ PS181 with super principal Andrea Belcher at the helm and NEVER took action to terminate her!) then, the invisible man,, oops , I mean the Superintendent goes for the ReadyGen curriculum ! LOL! It says pre-publication copy across the cover! I mean, U CANT MAKE THIS UP! Millions spent on something that is unreadable and unusable because it is missing key components! So let's see.. Principals who are , like Marcella Sills and Andrea Belcher, robbing us with no consequence, curriculum that is unfinished and inadequate for our students needs and not enough decent structures in existence to support whatever we are trying to accomplish. I think that covers it, don't u? I will take the snow day foul up as long as they don't come to the table telling Mulgrew no raises or retro.. Then, I might take it back and be just as ticked off as everyone else ;)

I agree with the last post (Anon 11:41). I am laughing so hard. I couldn't have said it better. Snow day problems? I had less than 20 kids all day out of 5 classes of 30+. My new AP is a hoot. She's a real firecracker with less than 3 years as a teacher. She's very well qualified because she's single with no kids which means she can stay till 7 pm each night because she has no life. My principal doesn't speak English that well and I don't see him much. New Visions is our network and I haven't seen anyone from there forever. I couldn't even tell you who our network leader is or what he/she does. My check keeps coming, per session is rolling, and they even asked me to do Saturday tutoring. I love this job. Nobody is at the helm. It's perfect. I could care less about Walcott, Klein, Fariña, or any other person who has a ridiculous title of "chancellor". Too many kids in too many schools spread across 5 boroughs. I blend right into the wall and you can't see me. Enjoy the weekend Chaz. It's almost June baby. I love DeBlasio. The guy is great. Wait until his pal Hillary is elected president. NYC is gonna be rockin!!!!!