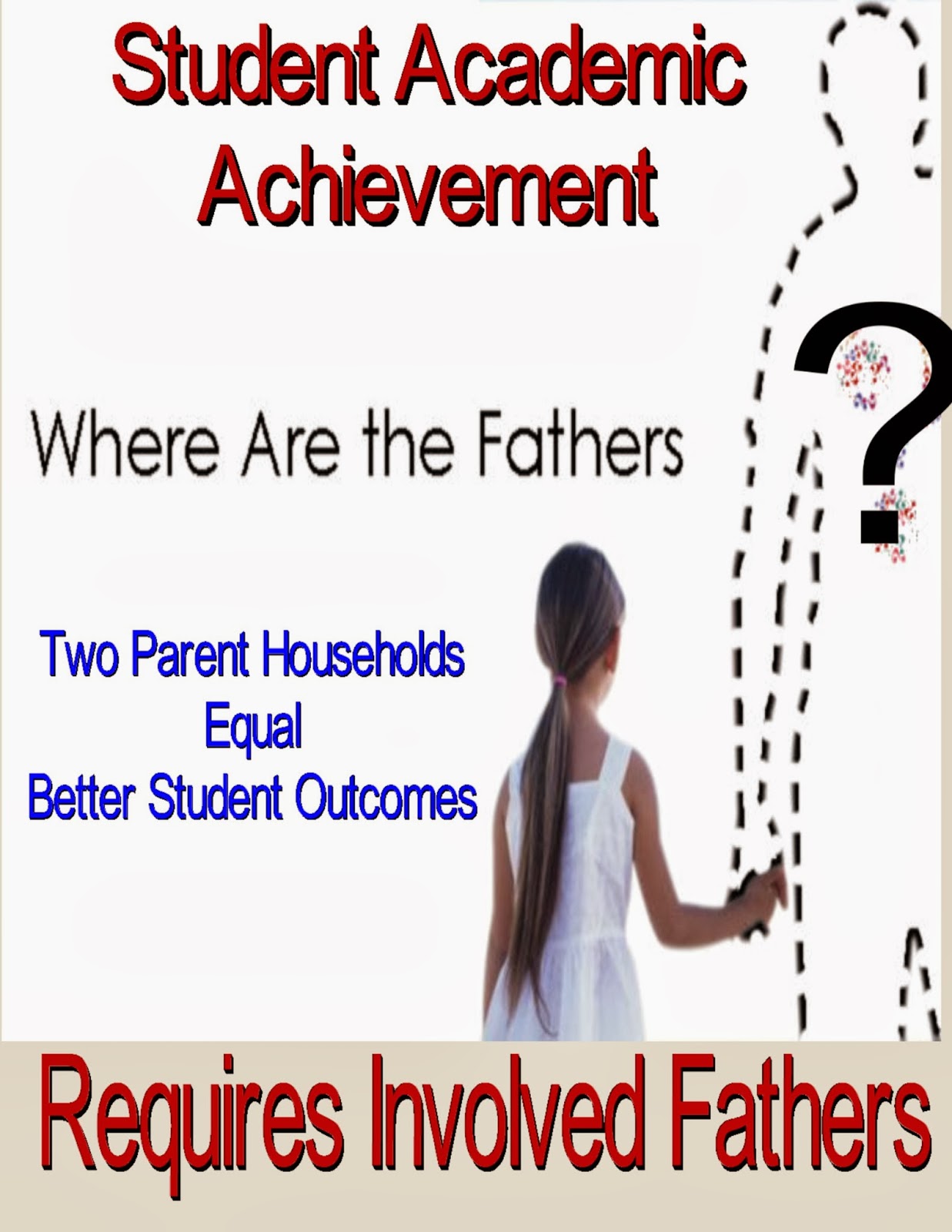 Now that Bloomberg is gone and the new Mayor is the progressive Bill de Blasio, the "tale of two cities" ends,  or does it?  The answer is that its going to be really difficult to end this division and one of the main factors are families that don't have fathers.  Since the "Murphy Brown era", fathers have been marginalized.  Yet the consequences of not having fathers in a household is staggering.  In New York City 43% of school children live in a single parent household and the City poverty rate has increased to 21,2%,  Black and Hispanic household poverty rates who had children were 35%.

While its nice to supply statistics about poverty and single family households, let's see what children grow up with when a father is living at home.

Here are just some of the problems that various studies have found when there are no fathers present in a child's life.

In the blog "Fallen Fathers" some of the statistics in the post are downright frightening and needs to be read. if the statistics are true, and I have no reason to believe they aren't. Is it any wonder that we have the problems we have in the schools, especially in the large urban areas?

Maybe the first thing the de Blasio Administration should do is to get fathers to support their children and make them engaged parents.  Otherwise, nothing will change.

Sorry but I'm a single mom and my daughter has excelled all through school while I know some students with two parents who are failing. It has to do with the amount of time parents spend with the child not just the number of parents they have.

Please visit campus magnet and far rock high school and see for yourself the destruction of the family and its direct impact on student learning. You can point to some great success stories of single parent students who do well in school but the majority do not!!! America needs to wake up to this epidemic before its too late. I applaud your fine work with your child but they are not the norm.

I agree with Anon 8:43. While I respect your success with your children, I have seen too many disruptive and academically challenged students and the common denominator is a lack of a two parent household.

Poverty and single mothers are not a good situation for student academic achievement.

Poverty and single parenthood are directly related. Some may say actually planned. If you're a poor parent your severely penalized via welfare if you have a spouse with you. Daniel Patrick Moynahan wrote and predicted the destruction of two parent households,illegitimacy and all the subsequent aspects of it back in the late 60s, when the system was first being enacted and used. Prior to two grad students from Columbia signing up tens of thousands of New Yorkers (in one weekend) for welfare in the 60s, welfare was considered shameful, families were intact and people strived for success. Accepting the handouts has caused complacency in many of the poor. If you get a check, free apartment, food stamps, free breakfast and lunch at school, and a free education, many feel that's pretty good. Why give up a sure thing for the uncertainty and hard work of something that maybe better? I believe the rich in this country are happy to give those handouts to keep the poor poor and uneducated, thus maintaining the status quo.

NYC EDUCATORS: Lets all send emails to a new york times reporter GINIA BELLAFANTE who wrote an article on our new chancellor Ms Farina and the new contract due to teachers. However, this idiot, jerk wrote that "ATRs these are teachers who are receiving full pay even though they are working as substitutes or in clerical positions, having been dismissed for poor performance or having lost their jobs to school closings or budget cuts without getting rehired". Hey Bellafante, you are a complete moron and this article CLEARLY indicates that you write articles without ALL THE FACTS.......How scary is it that you wrote this article without properly researching what the ATR pool really is about. Bellafante, you clearly are out of touch, just read the reader comments from your article where just about every reader is correcting your error in explaining what the pool of teachers who came from closed schools are about. Its people like you ms bellafante in this world that are followers and not original thinkers because if you do the proper research your article would have read that the new chancellors first priority should be to get the ATR teachers and guidance counselors back into the classrooms because bloombergs policy of rotating ATRs was a political screw up big time.

I agree with the comment about the bellafante article in the new york times about carmen farina and the new UFT contract. The fact that bellafante did not mention that not only are there teachers in the ATR pool, there are also, guidance counselors, social workers, secretaries, assistant principals and even other staff so can it be that all of these people are not desirable?? Joel Klein and bloomshit are responsible for this wasted, ridiculous system of degrading our educators. Mr. diblasio, please get out best teachers and counselors back into our schools where the students need them

Someone needs to find out who this writers editor is because if the editor in chief knew that this writer was writing stuff without complete understanding of the situation should be fired for incompetence. Fire her ass for a boneheaded article which also attacks the UFT UNION saying that the union will get its way with the ATRs.....DA,,,,these people are educators who work here and were displaced because bloomberg was a sick maniac and wrecked havoc on our educational system
I SAY FIRE BELLAFANTE WRITER FOR NEW YORK TIMES

A MESSAGE TO THE NEW YORK TIMES:

FIRE GINIA BELLAFANTE WRITER FOR THE NYT WHO WROTE ARTICLE: Schools Chancellor Brings Joyful and Fierce Style
This writer should be fired for incompetence or being undesirable now. This article is biased and full of shit FIRE HER ASS NOW BITCH

I've been a 7 day a week home delivery subscriber to the Times for over 20 years and for the 2nd time in the past 2 months I almost cancelled it. Let alone the ignorance of theTimes where the hell is our Union defending us - nowhere - they just allow all this crap into the press and do nothing about defending our honor.

Also add Springfield Gardens and Beach Channel as schools in which the students are completely out of control.

Third something needs to be said done and written about the disgusting ATR supervisors that are handing out u ratings to teachers all over the place. Chaz please write and advise

Yes where is our union. Michael Mulgrew does not care about teachers. And teachers do not care about themselves. They voted for Mulgrew. Serves them right if they all get U.