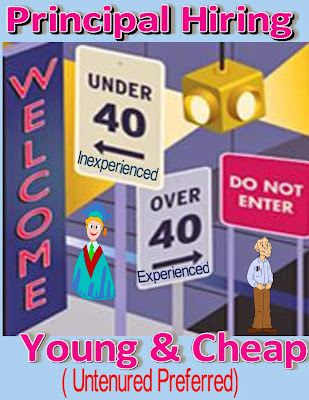 During the Bloomberg years one of his familiar slogans was to hire "quality teachers" for the New York City schools.  Of course his idea of a "quality teacher" was very different than what most people think it is.  According to No Child Left Behind (NCLB) a "quality teacher" was properly credentialed, experienced, and a deep knowledge of curriculum.  By contrast, during the Bloomberg years, principals were encouraged to hire "newbies", from alternate certification programs (Teach for America or Teaching Fellows),  untenured teachers, and young over old.

To ensure that principals would do his bidding, he and his Chancellor, through Eric Naldelstern's infamous 2009 memo informed Superintendents and CFNs to hire "Leadership Academy Principals" who lacked classroom experience but shared the Mayor's and Chancellor's vision. Furthermore, they implemented the badly flawed "fair student funding formula" that discriminated against older and highly experienced teachers. Moreover, by requiring school budgets to include staff salaries, principals were strongly urged to hire "quantity over quality" by making it painful for a Principal to hire the "quality teacher".

Finally, the 166 schools closed during Bloomberg's tenure and the explosion of teachers reassigned to "rubber rooms", peaking at 804 back in 2008, resulted in an ATR pool that averaged over 2,000 strong.  Even when the Mayor imposed a "hiring freeze", there were loopholes large enough to drive a truck through. When ATRs did receive a "provisional position", over 90% were returned to the ATR pool the next year since the school usually didn't want to pick up the ATR's salary for the second year since it would count against the school.

Under Mayor Bloomberg and his Chancellors it was "education on the cheap" and not "children first" when it came to what's best for the classroom and the hiring practices by principals reflect this.

Update:  A young Chemistry Teacher, Anna Poole, apparently demonstrated a dangerous experiment without taking proper precautions and two students went to the hospital with burns, one seriously.   In Rate my teacher   her first couple of years of teaching in 2010-11 she was given failing grades by her students at Bronx High School of Science (63%).  The question is why did the Principal of the Beacon School pick her up if the Bronx High School of Science jettisoned her and the students rated her poorly?  Could it be that she was young and cheap?
Posted by Chaz at 10:05 AM

Chaz,
Do you know where we can get the list of the 160 schools that Bloomberg closed? Been looking and cannot find so far..any link or helpful site you can think of?

Do you believe things will change come feb/sept under our new administration? or will it be same old,same old?

To set things right will create a tremendous upheaval for the entrenched Bloomy trolls. These trolls are the network leaders, leadership academy principals, and the unlicensed, untenured, inexperienced classroom teachers. It has the potential of creating pure chaos for everyone. Whatever is done will have to be done carefully and gradually. The rats need time to scurry out and Carmen needs time to exterminate.

Nice article. Too bad Gotham Schools didn't think this article is important enough to add to their daily review.

Too bad the DOE couldn't see fit to hire an experienced science teacher at Beacon School.
http://nypost.com/2014/01/02/students-injured-in-high-school-science-class-blast/
Instead countless seasoned ATRs are passed over for positions; instead former science APs are in rotation, APs that might have given better guidance.

The UFT and the CSA could have fought to have seasoned pros in the schools.

The "Rainbow experiment" conducted at the school was the subject of warnings by a federal safety board.
http://www.nytimes.com/2014/01/04/nyregion/school-experiment-that-burned-boy-was-focus-of-federal-warning.html?_r=0
And a lab design company faulted the teacher for not making students wear safety equipment.
http://www.nydailynews.com/new-york/beacon-teacher-faulted-experiment-leaves-students-badly-burned-article-1.1565533
Instead a teacher had a tragic fire accident.

Not sure that Suransky is rabid but his credentials as a serpent are impeccably damning.

Now that's an article for the NY Post, Times and News!

Here is a video warning against doing the "Rainbow Experiment" by the U.S. Chemical Safety Board, dated Dec. 10 2013. It is a narrative, including horrible pictures, of what happened to a beautiful high school girl sitting in the front row when her high school teacher performed this experiment.

I was distressed to learn once again of a serious high school laboratory accident, this one occurring yesterday at a New York City High School. According to media reports, a flash fire occurred during a demonstration in the high school‘s laboratory resulting in injuries to injuries to two 10th grade student, one severely.

This accident is all too similar to the one we highlighted in a recent video safety message released by the CSB that specifically focused on potential dangers in high school chemistry laboratories. The CSB’s safety message entitled “After the Rainbow,” features accident survivor Calais Weber in her own words describing how at age 15 she was burned over 40 per cent of her body during a chemistry demonstration performed by her teacher at a prestigious boarding school she attended in Ohio. That accident occurred on January 23, 2006. Our chemical investigation screening process regrettably regularly reports similar accidents.

Though information at this stage is very preliminary, media reports indicate the accident that occurred yesterday in Manhattan may have been similar to the type of demonstration that critically injured Ms. Weber in that it attempted to show how chemicals react in different ways giving off different colors.

The demonstration in the CSB video showed the use of highly flammable methanol to depict how various mineral salts produce different color flames when burned.
The CSB believes that accidents in high school laboratories occur with alarming frequency. Yesterday’s incident is yet another example of a preventable incident and a reminder of the need for exacting safety measures to protect students and school property. As Calais states in the safety message, her accident should never have occurred, and that with better attention to good safety practices, similar accidents can also be avoided. She says, “It feels with this type of injury that you’ve had so much taken away from you unnecessarily and to keep reading about other people who have had very similar experiences, it’s tragic and shouldn’t happen.”

Interesting program just aired with Mulgrew, moskowitz, and parents with Diane Williams, ABC Up Close. Illustrated some of the problems we may face with public perception.

I watched Suransky sit and listen to parents beg for their schools not to close. We watched him sit with deaf ears, staring into the eyes of all speakers. DeBlasio needs to set an example here by dumping this piece of SHIT!!! He's a nobody, kiss ass little bitch who thinks he's special. Let him go work up in Albany with John King. Better yet, place him in the administrators ATR pool (a network leader position). Suransky is the laughing stick of the system with his fake ass video we all watched on the Danielson BS model. What a pathetic bastard! Scum!

The Leadership Academy can not facilitate the training of principals. Case in point Ben Sherman a Principal who spent more time in Japan then in a classroom has spent the last 8 years being mentored.
If he is so experience and trained by the Leadership Academy why does he still require a mentor?

Did the school have a lab specialist?
You can be sure that many more accidents will occur because the lack of these professionals.

How many teachers would still have jobs if school administrations took sites like Rate My Teachers seriously?