Where Did The DOE Job Losses Come From? Not From Tweed! 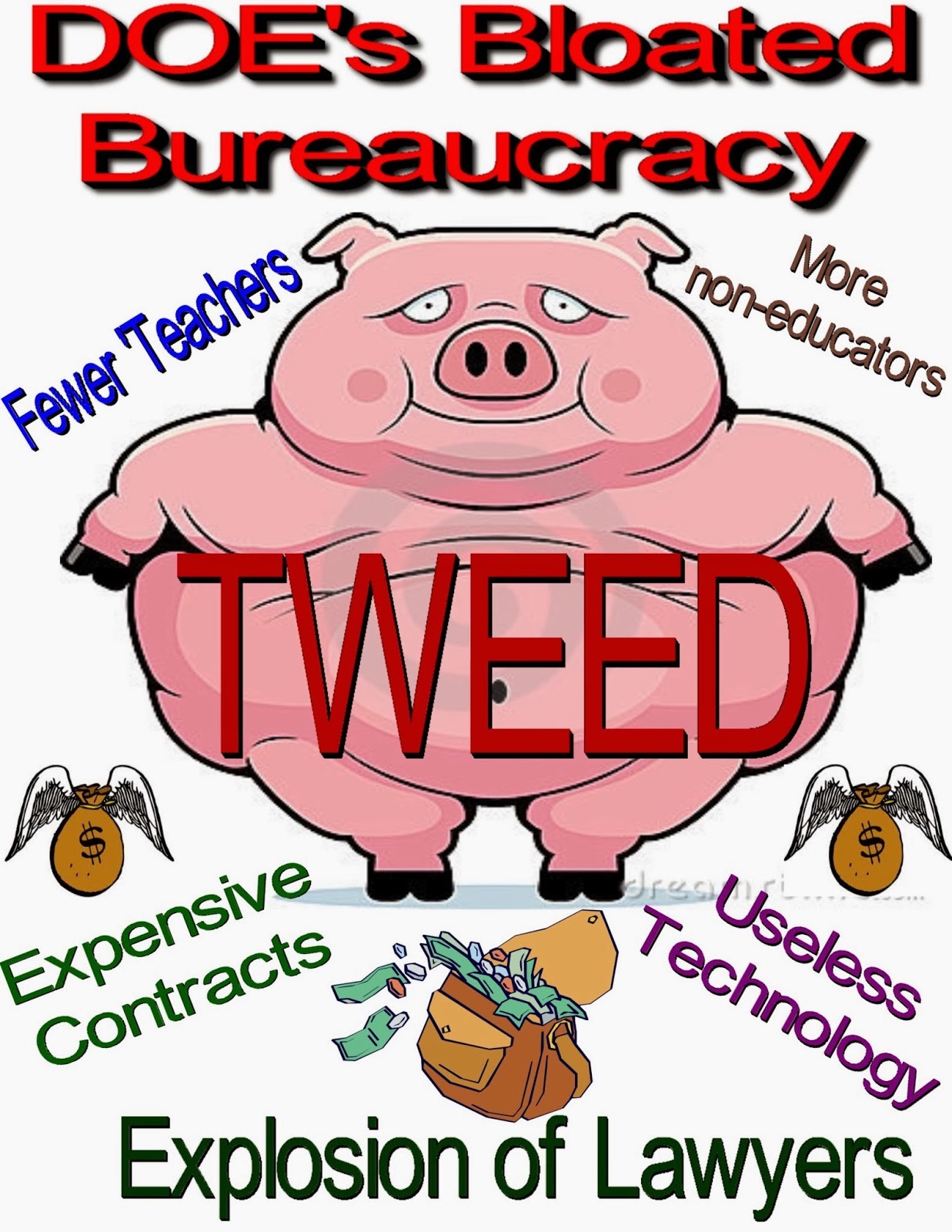 The Chalkbeat New York published information that came from the Independent Budget Office (IBO) that showed that there was a 3.3% decrease of 4,496 DOE employees since 2002.  Now one would think that  the Bloomberg Administration's claim that they reduced the headcount at the Central Bureaucracy was  really reduced.  Wrong!  The headcount actually increased while the schools suffered a 14% budget cut since 2007.  Previously, I wrote about the headcount and said this:

Headcount:
While the New York City Public School System has shown a reduction of 8,000 teachers (80,000 to 72,000) and a rising class size as more students enter the school system, the headcount at the Central Bureaucracy just increases. Tweed claims that they reduce their headcount but in reality they simply play a "shell game" by forcing schools and field offices to take on headcount that are really from the Central Bureaucracy. While it is difficult to ascertain the actual numbers because Tweed lacks transparency, there is no question that there has been an increase in non-educators in the DOE.  The last numbers I saw showed that there was a 70% increase in headcount at the Central Bureaucracy since 2003.  In City Council testimony during October 2012,  Michael Mulgrew stated how a Deputy Chancellor bragged about how there was a decrease of 32% to school support services since 2006.  Where did the savings go?  Not to the schools.  Instead it went to hire more consultants, managers and lawyers at Tweed, that's where. While I have no idea how much can be saved by streamlining and eliminating the redundant and useless bloat at Tweed, I suspect that $1 billion dollars would be a conservative figure for annual savings.

Nothing in the IBO report, changes this statement in my previous post.  In addition to a reduction of 8,000 teachers by attrition, the Bloomberg Administration laid off 1,179 school aides since 2007  including 530 back in 2009.  If you simply add the reduction of the teaching staff with the layoffs of school aides, it comes to approximately 9,200  school employees who no longer are DOE employees, not including other school personal.  Since the DOE has lost 4,496 employees, that leaves an additional 4,200 employees unaccounted for.  Of course, these additional employees can be found at Tweed and the Central Bureaucracy along with their support organizations. Instead of reducing the headcount at the Central Bureaucracy and Tweed, the opposite happened.  Yes since 2002 the headcount actually increased a minimum of 4,500 employees and probably more if we include other school staff attrition rates not included in the article.In other words, while the schools saw massive reductions in DOE employees since 2002, the opposite happened at Tweed and the Central Bureaucracy.

Hopefully, the new Mayor and Chancellor needs to streamline the bloated DOE Bureaucracy and redirect the savings to the schools. Nothing less should be acceptable since its "children first" right, right?

Every business in America strives to eliminate redundancy. Bloomy is the only businessman who touted the business model and created redundancy. Now there are 7 principals in a school instead of 1, new teachers replacing professional teachers(ATRs), etc., etc.. Much of the black magic he performed goes back to Randi Weingarten agreeing to the demise of seniority transfers. Without that agreement he could not have proceeded with his plans. Why did she agree, certainly not because she concerned about layoffs for senior staff. It simply could not and cannot be done (LIFO). Someone should check her bank records for that time period and see what the real reason was.

Bloombergs stench will last a bit as a fowl odor takes some time to clear. Bloomberg cut a big fart and we all have been smelling the stench. Its really amazing how bad bloomberg really was and more amazing how he thinks he was improving the schools! This is the world we live in today people where dictators such as bloomshit are able to impose their sick will on the livelihoods of hard working, highly educated people and have to endure the sickly lies, deceits and brazen bullshit as bloomberg is one sick miserable human being.

Fat ass chris christy busted in the George Washington bridge scandal forcing people to sit in traffic for hours, creating a dangerous situation for possible emergency vechicles that may have had to pass. This story is an example of what goes on behind the scenes and one could only imagine the bloomberg stories behind the scenes. This story validates how phooey these politicians truly are as fat ass christy now in hot water -

She agreed and then left! 100 per cent agree she's not kosher.

Let count my run in with educrats this week. 1) Human Resource person at the network 2)Return to pay office 3) ATR secretary 4) ATR timekeeping 5) ATR placement supervisor
All for a simple return to the ATR shuffle.
How many instructional support classes facilitated by rotating ATRs at a large urban high school 5
Number of children not being serviced 45.

She also agreed to Bloomshits request to lower the TDA fixed rate from 8.25% to 7%. The head of the administration union refused, they still get 8.25%. I believe the absolute worst concerning her.