To Carmen Farina. Its Time To Take Out The Trash At Tweed. 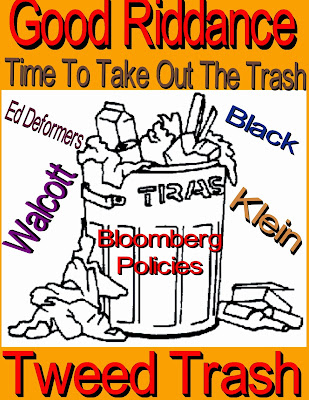 
Now that Michael Bloomberg and his poodle ex-Chancellor Dennis Walcott are gone.  Its time for the new Chancellor, Carmen Farina to do some very extensive housecleaning at the Department of Education (DOE).  In other words "its time to take the trash out".  At Tweed, there is plenty of "trash" that needs to go.  First in line should be Deputy Chancellor Shael Polakow-Suransky who provided cover for the last two non-educator chancellors, participated in closing schools and long forgot his teaching roots to please the Mayor on his quest to destroy the teaching profession.

Next Carmen Farina should be asking and accepting the resignation of the "gang of eighteen", almost all non-educators, who implemented the destructive Bloomberg education policies that resulted in the closing of 166 schools and his "education on the cheap" policy that excluded parents, antagonizing school staff, and hurt the students.

Moreover, the Chancellor must eliminate the bureaucratic bloat that is legendary at the DOE.  Hopefully, the new Chancellor cuts the overhead by eliminating managerial and legal positions and reducing consultant contracts.  In addition, giving the geographically placed Superintendent offices the power and responsibility to provide direction to their schools by tasking over the tasks of the soon to disappear Children First Networks. The tremendous savings could be used to give the schools the resources they need to succeed.

Finally, the Absent Teacher Reserve fiasco must be addressed and if the DOE is paying $160 million dollars for the ATRs, let's put them in a school for the semester and help schools by making them a "co-teacher" or a "push in teacher.  This is what's needed to help the students, not the demoralizing and useless weekly rotation system. By next school year the Central Bureaucracy should be given the responsibility for staff salaries and not the schools and the (un)fair student funding formula should be eliminated and the ATR pool should be a thing of the past.

In order of priority, here is what I hope the new Chancellor does before the end of the school year.

Its a new year and once the "Tweed trash is thrown out",  then real educational progress  can start to be realized.
Posted by Chaz at 10:54 AM

Well thought out post, very pragmatic and would definitely work. However, the DOE doesn't believe in pragmatism and common sense. I wish you were chancellor b/c you actually understand what is going on instead of these morons we have had and will have. Mark my words. Nothing will ever change in the DOE

Hi Chaz,
I believe all of the items you mentioned will be done. The DOE is not a sentient entity, it is controlled by those in power. It was monstrous under Bloomy but will change under DeBlasio. You will see all the network leaders, educrats and other rats scrambling to another trash dump to plunder. Believe it or not there are alot of individuals out there who don't want any change

Can't agree with you more! I especially love the idea of throwing Pael-Shuransky under the bus; he represents all that is "corporate takeover", heartless and sickening at the DOE. He makes Walcott look like his own man- well, I won't go THAT far, but this putz's maxim had to reflect the statement Cruela De Ville's head ass kisser made when she asked him, "What kind of syncophant are you anyway?", and he replied, "What kind of syncophant do you need?"

http://dianeravitch.net/2013/12/20/tweed-insider-where-the-bloomberg-administration-went-wrong-on-education/
this essay on Diane Ravitch's blog by a DOE insider has similar recommendations and cites much data in support

Second, third, and fourth that Martin...he's the biggest scumbag,of them all...a cold hearted lackey for the cause...

Why is Suransky still on deck? He should've been axed already or at least had the decency to run away with his tail between his legs, like his punk friend Mark Sternberg. This piece of s#%t sat in many auditoriums as parents, students, and community leaders pleaded with him to take their words to heart and not close their school buildings. He sat there and did nothing!!!! He's a real MOFO!!!!! A true garbage bastard! Dump that scumbag.

That PIECE IF CRAP Suransky still has a job? What the hell? He didn't put his tail between his legs and run yet like his PUNK friend Sternberg? Suransky is the poster child for school closings! I witnessed him sit in auditorium after auditorium watching him stare at parents beg to keep their schools open. He's still in place? FIRE THIS JERKOFF ALREADY!!!!!!

These fuc**** newspapers keep writing about the ATR situation and all they can think to write is to have layoffs. How sickening people is it that the supposedly educational writers at these trash papers write this idiot shit!!! The proper editorial is to get the ATR teachers back into the classrooms as they are the finest teachers NYC has to offer!!! With classrooms busting through the roof with not enough seats for kids, kids have no guidance counselors, just have the ATR educators get back to work!! STOP FOLLOWING BLOOMBERGS POLICIES PEOPLE OF THE PRESS....ITS OVER DONT BE HATERS GET INTELLIGENT
BLOOMBERGS A HATER DID YOU SEE HIM AT BILL DIBLASIOS INAUGURATION WEEPING LIKE A FREGEN SALIMANDER FACE THAT HE IS

677
Surransky will be the pizza delivery guy next time you order a pizza watch for him he will be driving a lime green taxi one of bloombergs legacy s.....lol great post by someone noting bloomberg cardiac arrest headline by ny post would be hysterical