Comparing Our Pension With Other State Pension Plans. 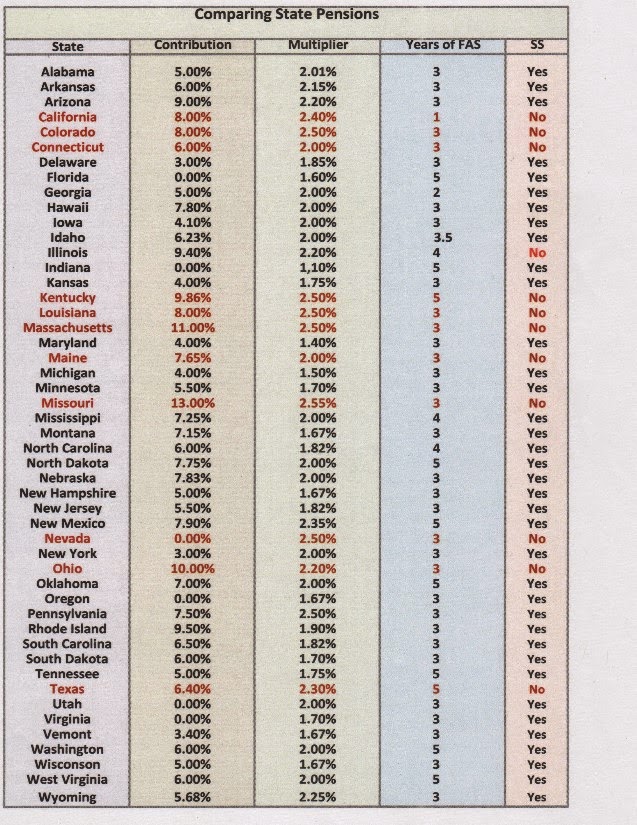 How does our pension plan compare to other State pension plans?  The answer is our pension is one of the better ones, assuming you're Tier 4 and are covered by Social Security (SS).    Even Tier 5 compares favorably with only a 3% contribution rate.   However, for those under Tier 6, it falls close to the middle of the pack.There are some States that have it as good as us, like Utah, Delaware, and Virgina but none have it better than New York.  In my opinion,  New York's pension calculation is one of the most generous giving a twenty-five year employee a 50% pension and add that to the Social Security check and you have about a 75% replacement of your working salary, that's a pretty secure retirement.

While the pension multiplier for some states are higher than New York's (2.0%), many of them are not part of the Social Security system and even using the highest multiple of 2.5% used by these States for a twenty-five year employee, the yearly difference would only be $12,500, less than half of what one can expect from Social Security ($26,000).   Furthermore, all but Nevada requires large employee contributions ranging from 6% (Connecticut & Texas) to a whopping 13% in Missouri. Even California who many consider having the best pension system in the country, requires an 8% employee contribution with no Social Security coverage.  I'll take New York's pension system anytime over California's or any other State's for that matter.

The table above compares all the states pension calculations, except Alaska since they do not have a defined benefit pension plan.

Thanks for the comparison chart. I never knew how fortunate we are.

Sounds good...where did you get the info from? References please.....

The National Study of the Net Benefits of State Pension Plans for Educators pg 31.

Maybe this is what induces "pension envy" fanned by the media. They'd rather see everyone working for only 401K money that Wall Street can raid whenever they like!

I guess Teach For America won't be using it for advertising, they're moving out of NY. A major defeat, hardly mentioned by the media. I guess even they figured out that the DOE is a cesspool.

Excellent information.
One question, do any of these states have real COLA increases annually as some of our uniformed brethern here in NY do? NY teachers do not. That would make a real difference in evaluating teacher pensions state to state.

You are correct. It's all sourgrapes, but you know what? They are all welcome to join the ranks...but we know that won't happen. It's easy to criticize from the sidelines than actually taking part and experiencing what we go through. For example, in today's Daily News editorial, some "senior fellow" (whatever that means) from Stanford University is critical of the UFTs effort to reduce class size. According to this "expert", teacher "quality, not classroom quantity is what counts the most. I invite this genius to try teaching for awhile and see if he still believes the crapola he is spewing in a couple of months.