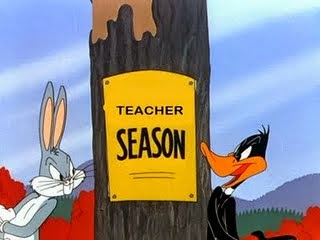 Well, the final numbers are in and, despite the State imposed punitive Danielson Rubric and the "Junk Science", only 1.2% of New York City teachers were found to be " ineffective".  This is slightly higher than the rest of the State (0.4%) but still too low for the Governor, ex-Mayor Bloomberg and his friends at Tweed, and the education reformers who were hoping for a 10% "ineffective" rate.  The good news was released by the State and Chalkbeat published the report which can be found here.


The chart below shows the City and the State teacher ratings. 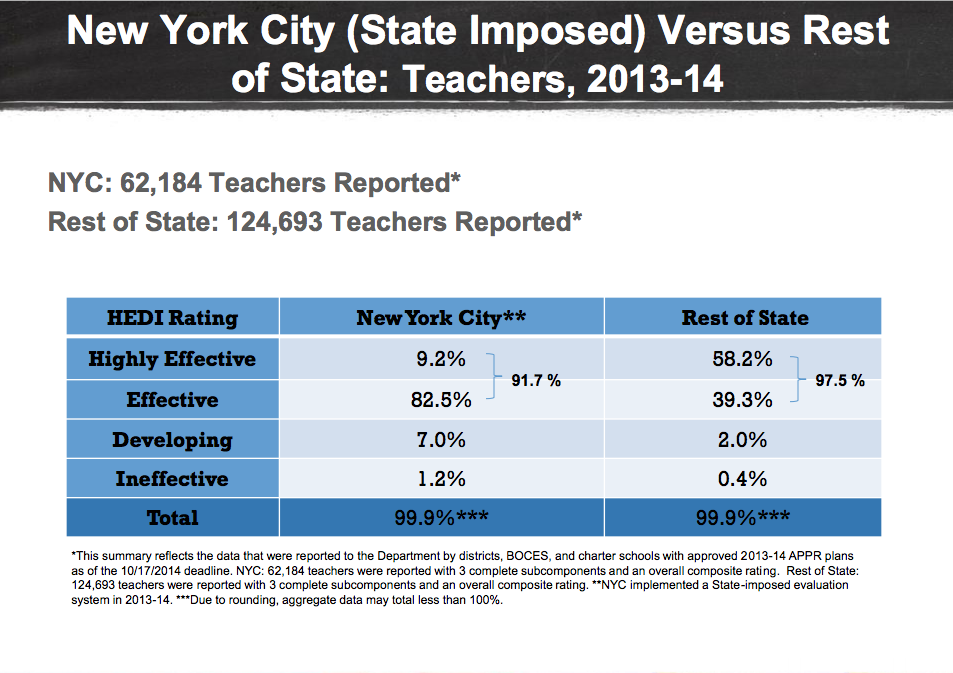 Look for the newspapers to complain, the education reformers to howl with disgust, and the displeased Governor to demand a more stringent teacher evaluation system, since few teachers can be fired on the first round of evaluations.  Teacher season is just beginning with the second term of the Governor and a new NYSED Commissioner who's mandate from the Governor will be to go after teachers and not to help the students who will suffer with "high stakes" Common Core tests that they are ill prepared for and "Junk Science" for teacher evaluations.  The Governor is a "student lobbyist"?  Not according to most real educators.
Posted by Chaz at 4:41 PM

Since it is baed on junk science, a rate of 1.2% ineffective, 7.9% ineffective, or 31.6% ineffective would not surprise me.
Anyone who reacts to the arbitrary numbers with anything but amusement doesn't know VAM.

That's funny coming from a guy whose only credential is that his father was governor. Oh, and he was a director at HUD....and formerly married to a Kennedy.

And yet you will give no credit to administartors. You spend alot of time bashing them for "i got ya's" theory. This should put that to an end........until next time you have an agenda.

The entire process is an insiders understanding to the basic psychology that exists in the modern work force today. First, if you have a ralationship with a supervisor in ANY industry, the supervisor and the employee understand that we all have families to support with YOUNG children, children grown up attending college, etc. We all want to perform the best we can so no one is going to zing it to people UNLESS you really are not up to the task. So, what I am trying to say is no matter what ingenious plan the gov and his cronies want to implement it will not matter. In NYC, in every nick and cranny school there are people working with each other who care for each other (for the most part)so the evaluations will always fall favorable to most people - So, Mario CUomo, Andrew Cuomo, tisch and all others can draw up any eval they want but remember we all are people who care for each other in the battle of survival and no sane work place sabotages its workers UNLESS of course it needs to be warranted such as an employee who does not respect the work place, i.e. missing many days of work, not respecting or following the rules of the organization - other than that cuomo and his cronies can make up all the evals they want. Hey cuomo knows all about this evident with this march with eva moskowitch and his wall street pals supplying the cash...Its works both ways people. Peace

The daily news reported on this news but the paper reported it with the headline that read "city teachers rate below rest of the state". This scum of a publication must always find ways to put a negative spin on anything and this paper is really proving itself to be the scum of NYC. This paper is a middle eastern mentality propaganda garbage crap shit hole of people sitting at computers spewing this crap of negativity and yellow journalism at its lowest point. Its amazing this crap shit paper is still in business - I don't know who the hell buys this piece of shit paper.

Guess its time for Cuomo and his goons to find another way to go after teachers...He is definitely NO MARIO brother

Mario wasn't any prize either, having closed down psychiatric hospitals throughout the state back in the 1980's with little regsrd for public safety.

I agree with most of what you say except for one thing - even amicable relationships between supervisors and teachers can end badly if supervisors are pressed by pols and educrats to find more reasons to label teachers ineffective. Supervisors, like the police, will have to meet their "quotas" to avoid problems for themselves. Call me cynical, but that's my gut feeling. What a terrible system we work in now.

If it did, can we conclude that that this Junk Scientific Calculation is better than the non-scientific(rather arbitrary) rating by administrators alone?

To 8:45. I am glad that things are just wonderful on your planet. But you would be singing a different tune if you worked for psychotic bastards like Kwait, Cruz, Dwarka etc. They would cut the food right out of your babies stomach. This trio thrives on creating misery for anyone who does not kneel at their feet and kiss their ass. I dare you to spend a week in any of these dumps Bowne - Bryant - Campus Magnet - you wouldn't last.

You are so right 8:46pm. 8:45 is very naive to say the least. If he or she thinks that no one is going to "zing" it to people unless they are really not up to the task has not spent any time in the schools mentioned above and many others. The gotcha mentally is alive and well my naive friend. Take off the blinders and you will see hard working dedicated teachers being abused constantly in this system. They have children and bills to pay but are being abused by a system that is more worried about ego and saving money. Education is not the number one priority of the DOE. Get a grip and open your eyes. Have a Merry Christmas if i am still allowed to say that these days!!!

The leadership principals are being exposed, kwait dwarka, cruz and many others and they still have a job destroying the lives of the staff and students. In fact many have been promoted for destroying the careers of many senior teachers. Wake up its howdy doody time.

What is the percentage of U ratings for ATRs? Is this factored in?

No bad wishes intended at all, but if I were you I would expect a visit in your dream tonight by 3 ghosts to wake you up to reality.