Retirees Will Get Their Retroactive Pay In February - Maybe. 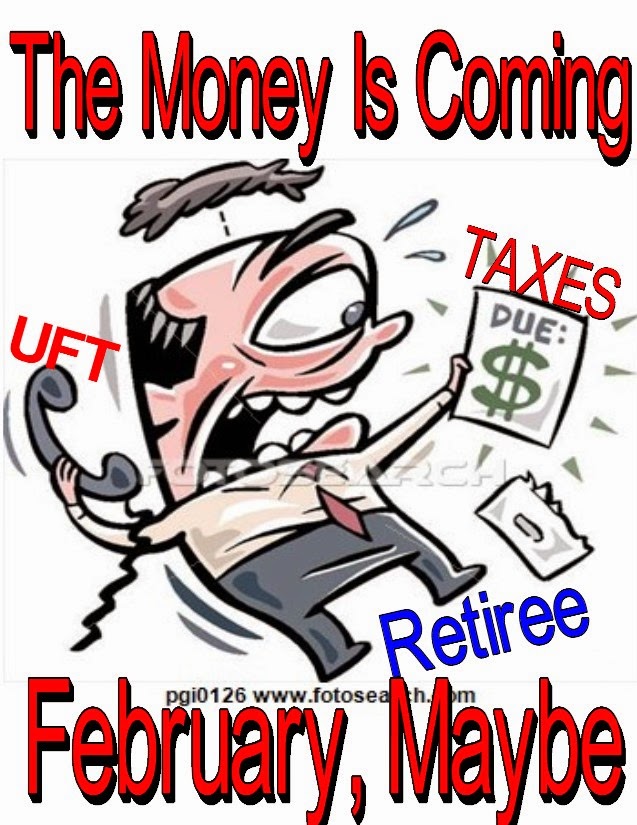 In December the UFT General Assembly was informed by President Michael Mulgrew that the retirees will get their retroactive payments in February.  Hopefully, he meant February of 2015 since his union's track record hasn't been too good lately when it comes to those promises to the retirees.

Back in June the UFT leadership assured the potential retirees that, at worst, the retroactive payments will be sent to them in October.  As October rolled in, the retirees became concerned about the retirement payments.  The UFT leadership reassured the retirees that they will receive their payments in November, later on they said it would be paid by Thanksgiving.  As Thanksgiving came and went with still no payments to the retirees, the UFT was inundated with angry calls from cash-strapped retirees wanting to know where the money is as they struggle to pay their tax and other bills?  The UFT response?  "We're working on it".

Now the new date is February.  Of course Michael Mulgrew didn't say February of 2015 and when the retirees finally do get their retroactive payments, let's say sometime in September of 2015, the UFT will take credit that they pushed the City in giving the retirees the money five months early instead of six months late.

I hope Mulgrew did not mean February 30th (sarcasm!)

I'll see come February and if nothing comes then, it's time for the retirees to put down their Retired chapter meeting bagels and demand their retro active pay. Then again is Mulgrew going to kabuki the situation and allow the city to delay the retro until several months before his election campaign begins in November 2015?

Remember it's all about politics and making leaders look like heroes. It's time to vote Mulgrew out in May 2016. I tired of him and his followers. We need to change the UFT which will lead to a change in NYSUT, and hopefully, a change in the AFT.

The soon to be retired/retired were a major force in getting this contract passed. As far as I care, they should wait till the sun rises in the west.

This is what teaching has become. How quickly can I get the hell out and where's my money!? Who does the Union want me to throw under the bus and how much will I get if I do? Now the bribe hasn't been paid and I'm outraged! How unethical! Who could have imagined such a scenario!?

I sincerely hope those that voted "Yes" then retired get screwed.

Envy is not a good personality trait. Try and be more respectful of those who made decisions based upon information outside of the contract retro dollars like health or family issues that you simply do not have. Saying you would like a retiree to get 'SCREWED' regarding retro pay is really pathetic, especially during the holiday season.

75% of the voters voted for the contract. They were not all retirees.

Of those 75%, how many are members with 5 or less years of experience in this system?

Hey 10:47. You are a real jerk. I retired in June with 36 years in and I just turned 62. I might have stayed if I didn't have an abusive principal. And just for the record I voted no for the contract because my own daughter who taught throughout this period and resigned to relocate to another state and school system was screwed out of pay she earned. So moron, if there is karma I hope that wherever you are your principal leaves and one of these horrible creatures takes over and makes your life as miserable as many of these poor ATR and sr. people have ecperienced. You are a douchebag.

I agree with Anon 10:51 and 9:54. Many recent retirees-(especially June 30, 2014) received info from those special June UFT sponsored special retirement clinics, UFT letters, UFT newspaper/website and even Mulgrew webcasts. We were told to speak to a tax advisor--because of one large lump sum retro payment sometime in the fall 2014. So in all fairness Anon 10:47, it was a no-brainer to retire as of June 30 after 40 years. But now he blames the city (Deblasio people) the his own union for under estimating retirees- and even past Bloomberg policies for delays. Now he says he has found a worthy arbitrator to get this settled by February (he calls it a time-frame). Let's see his excuse if it doesn't happen by Fe. 2015-then he is worse than a dishonest used car salesman.

Retirees just received the two 1% raises this week. Alas, anybody with a calculator can see that the 1% raises were based on $100049 instead of $108000 which took into account the 4% raises from both 2009 and 2010. We sat through countless meeting with big shots like Tom Brown and borough reps. We were told specifically that retirees would get the two four percent raises as well as the 1% raise from 2013-2014 and then another 1% from May 2014 through summer. Instead, the union has allowed the retro (now called restructured) to be separated and isolated from the two 1% raises. Nobody is getting it. This is how they will make the insufficient retirement fund work. The charts that were once on the UfT site explaining the step by step process are now gone. Our meticulously recorded notes of the meetings we attended when we asked specifically how retirees would be paid are now changed. Can we all be delirious? Mulgrew is banking on a retired membership that does not ask questions and whose calculators need repair. Our once Approximate $36000 arrears are now being eroded by separating per cents from retro.

I think you all forget 1 thing. people go to work to make money. or maybe we should call con ed and our landlords and say" can I pay my bills with " I love teaching". work=money . ya thunk!

February is here and still not word on our retro pay. Will teachers who are presently working get their retro pay before the retirees???? I don't understand how the city could under estimate the number of teachers who were going to retire in June of 2014. They gave those teachers less than 2 months to make up their minds and to me it was a form of a buy out for retirees. Once again the union has failed us !!!!