Why Has The UFT Leadership Failed To Take The DOE To PERB On The Problem Code Issue? 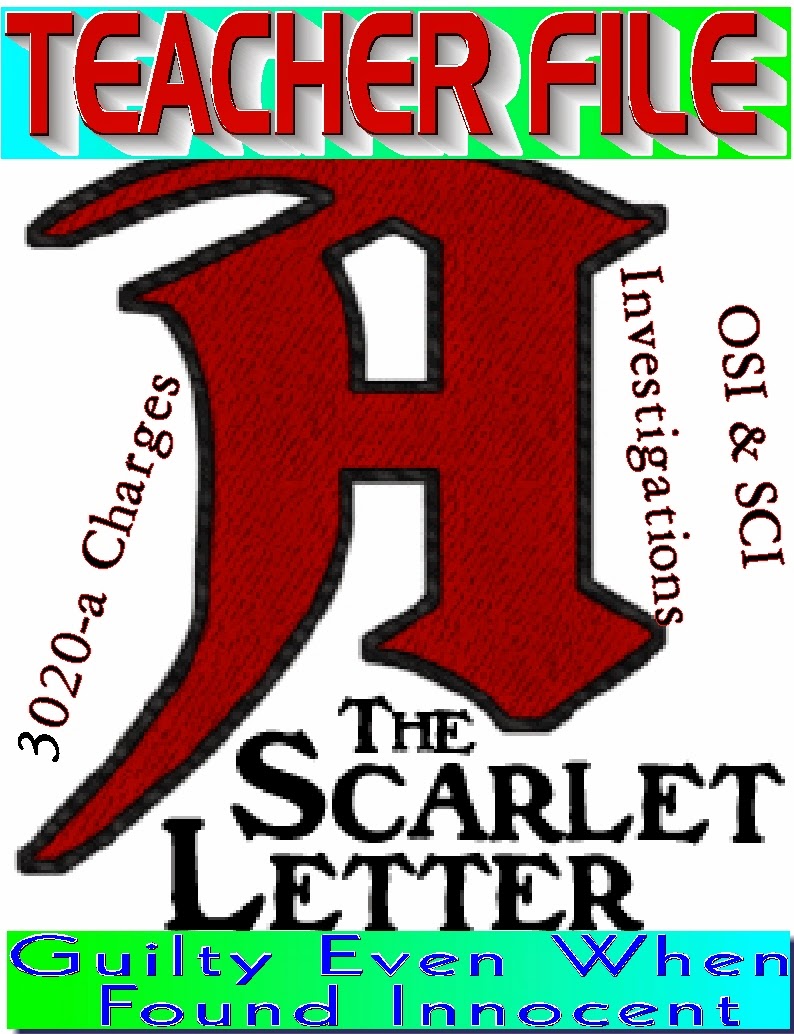 Back in 2012, the DOE decided that any teacher who was subject to a DOE investigation (SCI, OSI, OEO) and found to be substantiated will have a "problem code" attached to their file.  It mattered little that if the teacher decided to go through with their 3020-a hearing and the independent arbitrator found that the DOE investigation was flawed and found no serious misconduct, the DOE still kept the "problem code" on the teacher's file.  At the time the UFT leadership objected and claimed they will take it to PERB.  However, the UFT leadership failed to pursue the PERB complaint.  The question is why did they quietly drop their promise to file a PERB complaint, or did they ever really intend to fire one in the first place?

The union's failure to protect their members shows up yet again, be it the second class status of the ATRs, reassigned teachers put on ice in a different borough, or the labeling of the unfair "problem codes".  Our union's failure to remove the "Scarlet Letter" from their member files is a disgrace and must be corrected.

As a member with one of those "problem codes" on my file.  I will be more than happy to be the test case, if the union leadership wants to challenge the unfair DOE designation that has damaged many member chances from obtaining a position.  However, I doubt that the disconnected leadership will do the right thing and file their long promised PERB complaint.

There is no direct way to know if you have a problem code on your file, unless the Principal or payroll Secretary is kind enough to show it to you on their computer screen.  However, you can go to the DOE's payroll portal that a member can access.   Go to Salary History and you will see just below your 2013-14 rating the word "problem".  If that appears on your Salary History and something is listed next to it, you probably have been "problem coded" on your file. Remember, this goes back to at least 2002 so an incident that happened more than a decade ago is deemed as current under the DOE.

Then file it yourself.

The union must file it. I cannot.

This is what I found when I went to salary history. Let me preface it by saying that I have never been brought up by charges, and my official ADVANCE rating for the year was effective.

This seems odd, and makes me very nervous.

It is my understanding there is suppose to be a code next to the word problem. I had an OEO investigation a few years ago but it was unfounded.

Are you sure there wasn't supposed to be a YES or NO next to word "Problem"?

So chaz file perb against the union for not doing their job and not represent you!!!! You certainty can do that for sure!!!
And why not? Why can't you perb the doe yourself. Where in writing does it say you can't only the union can!!! I would like to know!

I went to "salary history" and I did not see any ratings. Could you post a screen shot of a dummy salary history and circle in red where to find those things?

I too have the word "problem" next to my rating (salary history tab), but nothing else next to it. No numbers, no word(s).

I had charges brought against me but they were unsubstantiated. OSI.

It seems that everybody has the world "problem". I assume you must have a notation next to it.

It sounds like something the UFT could win fairly easily. It would get a lot of great teachers back in the classroom. You've publically thrown down the gauntlet, if they don't do this, it publically shows they're complicit and not representing ATRs. I would ask the blogging community to make a big deal about this and get the word out to everyone; to force the UFTs hand or expose them.

Does a teacher need to go through a 3020A to be problem coded? Can someone get problem coded for seeming to have a bad attitude, or ask too many questions? How about not doing well at ATR interviews?

You can be problem coded without going through or being charged under 3020-a.

A problem code does exist on the salary history screen. Next, to problem..mine says PR. Which certainly means Permanently reassigned-which I am. Everyone has the word PROBLEM...and it's not supposed to say yes or no. It's supposed to say some letters. Someone I spoke to said under problem for theirs said "UI"- which can only stand for under investigation.,,,which they are. I don't know what other codes exist as I haven't come across anyone that knows anything about this secret system.

Actually, article 75 complaints in court can be filed by individuals. Your lawyer (or you. Many petitions are hand written) simply acts as your representative instead of your Union for the issue at hand. The court decision is as influential as a PERB decision.

But I'm having a difficult time accepting the accuracy of the assertion about the word problem. It seems your commenters have this word and have not been investigated and I, as a fellow blogger, am inclined to believe that you may have been
misinformed by someone about the code showing up in the portal. Because folks' experiences seem to be inconsistent with what you're contending, I'm wondering if there is a way you can clarify after you've doinle checked. Only asking because it's a potentially valuable insight.

If thee is a notation next to the word "problem", you are problem coded!

As for an Article 75? You must first, exhaust the available remedies and that includes the union going to PERB.

You may want to check again. There is no need to exhaust your own union representation first. We have one more layer of protection. The DoE has the burden of proof to show that there is reason to code you as a problem and has to show that the problem doesn't shock the admin judge's sense of fairness (and since the code persists today, you really shouldn't have a tough time with the statute of limitations). I know a Chapter Leader who utilizes Article 75 now and again. Email me if you'd like me to connect the two of you. Also, here's a link to the law.

send me the info.

I think atr and teachers with problem codes should get a private attorney and sue.

How do you find this? Is this something found in an official paper? Can a substituse teacher find out his record with doe?

The UFT does not like to talk about article 78 nor PERB. It seems as though those options are taboo since Mulgrew came in. As for being problem coded, I have found the easiest way is to ask a payroll secretary that you worked for and was friendly with. Trying to find out via the DOE is a waste of time. ALL the offices you contact in the DOE will say, they do not know what you speak of, or something along those lines. You need a connect. You do not have to exhaust your union options prior to filing an article 78 and/or PERB, BUT at PERB and with an article 78, the judge/arbitrator will ask if you've had a hearing and what the outcome was. How or even if that plays into their decision, beats me. I agree that the UFT should fight to have the problem code removed. When you speak with UFT reps they tell you that you can work in any district other than the one you've been discontinued from. However, if you've been discontinued you know that's a crock of crap. Well that is unless you have a principal that is willing to fight tooth and nail to get you onboard. That doesn't happen very often and believe it or not, a lot of principals are afraid now too. Woe for the teachers and students alike. I thought Carmen would have been better...I like so many others, were wrong in out thinking. Does anyone give a flying fig about teachers?

Here is the URL to the home page of the NYS Public Employment Relations Board (PERB):

And here is the URL to PERB's Staff Directory:

Why not direct questions about PERB directly to PERB?