Chancellor Carmen Farina Kept 80% Of The Bloomberg Managers At The DOE. 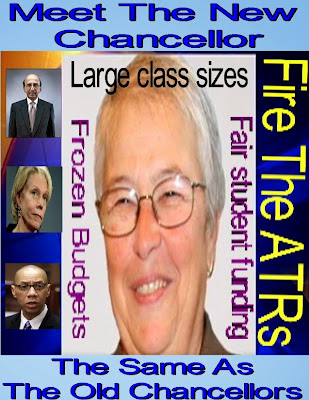 When Mayor Bill de Blasio became Mayor and appointed Carmen Farina as Chancellor, most educators were hoping for a "spring cleaning" of the Bloomberg agenda at the DOE.  However, it was obvious that many of the Bloomberg managers and their agendas remained relatively untouched by the new administration.  Now Chalkbeat has reported that an astounding 80% of the Bloomberg era managers are still at the DOE and in the same or similar positions that they occupied under Bloomberg.  Is it little wonder why the teacher in the trenches see little change in the hostile classroom environment or the "gotcha mentality" that presently exists?

Despite the continued love affair between Chancellor Carmen Farina and UFT President Michael Mulgrew little has changed when it has come to DOE policy.  Michael Mulgrew claimed at the Chapter Leader conference that the Chancellor could not remove them too rapidly because they are protected.  Protected? My question since they are managers and at will employees how are they protected and couldn't the Chancellor remove them to positions that didn't include implementing policy? Of course she could and as for policies?  The destructive "Fair Student Funding" is still in place,  the ATR crisis continues unabated, and the bloated DOE Central Bureaucracy is still dominated by lawyers and data mining managers.  Is it any wonder that the recession era school budgets have remained frozen the last two years despite more money from the State and a City budget surplus of almost 6 billion dollars!  It appears the extra funding simply feeds the DOE bureaucratic bloat and never seems to reach the classroom.

The Bill de Blasio administration has failed to live up to his promises in reducing class sizes, bringing respect back to the teaching profession, and providing adequate resources to the schools and the classroom.  Worse than the Mayor's failure to live up to his campaign promises is his failure to change the tone at the DOE and improve working conditions for school staff by selecting a Chancellor who has proven to be part of the problem and not a solution to improve schools and raise teacher morale.  The Chancellor's ill-advised decision to keep 80% of the Bloomberg era managers and their destructive policies at the DOE is simply poor management and a failure to improve the New York City Public Schools.
Posted by Chaz at 12:06 PM

As a senior citizen Farina should be more empathetic of ATRs who are overwhelming over 50 years old and are being systematically discriminated against. This should have changed when she became chancellor, but it has become more entrenched and enhanced with the cooperation of the UFT.

Chaz I am curious to think what your opinion is of DOnald Trump since he has been leading in the polls and appears to be a legitimate GOP representative. Will he be good for us here in NYC? What is his past record with regard to unions? I believe Trump will be great for us here and that he has been able to expose the loser politicians who have put us all in this position of ATR. Yes, I blame the ATR situation on political bull crap politicians such as bloomberg, klein, walcott and yes the infamous k. black. I do know that Trump is against the dreaded common core which has left bush in the dust. Trump is also for local control of schools and would wipe out the US Department of Education or at least cut it substantially. Please Chaz your thoughts.

Donald Trump is a clown and a disaster for the country. I will not vote for a man who is arrogant, close-minded, and makes too many idiotic statements.