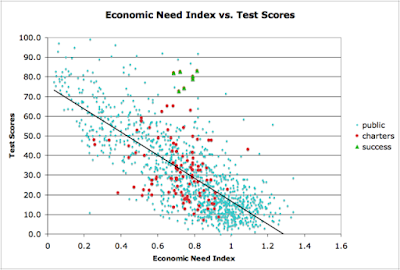 I was reading the New York Post opinion page and another so-called expert claimed that charter schools outperform public schools and that parents need more choice with a greater number of charter schools.  Interestingly, a very respected education blogger, Gary Rubinstein has crunched the 2015 New York State numbers and found that the claim of charter school superiority is an illusion.

When one considers that the charter schools have a lower percentage of English Language Learners and Special Education students and many refuse to backfill students who were expelled or encouraged to leave due to the charter schools draconian discipline and academic policies their failure to outperform public schools is shocking, to say the least.   Add to that, lower class sizes during the testing years, constant test preparation, and high teacher turnover, the charter results are highly disappointing and shows that the charter school claims that they provide a superior education than the local public schools is simply a mirage.
Posted by Chaz at 7:53 PM

I am an avid reader who likes engaging content. That's why I am here. Your original views on this topic are refreshing and interesting. You've done a great job of expressing your views. Thank you.

just goes to show you that most NYShitty students are dumb!

Just curious, If you lived in a poor inner city neighborhood, would you prefer your child goes to local failing school or a charter school?

Why do think that no student from the success academy ever was able to make it into the specialized high schools?

11:07
Failing how, test scores? All that shows is that a certain percentage of the students are not 2 years above grade level. Are you calling grade level students failures? Test prep is not teaching. Shocking, isn't it that all those private schools also agree that test prep, common core, and high stakes testing aren't teaching?

I have no words to explain this topic but this is really good job. Thanks for it. Write my assignment on Excellent Academic Help

Out of work, party, you may need a watch to reflect your temperament and vision,fake watches

to show you different from the general taste and vision. Here to meet your needsreplica watches uk .thank.