The Difference Between Getting An Unsatisfactory And An Ineffective Rating. 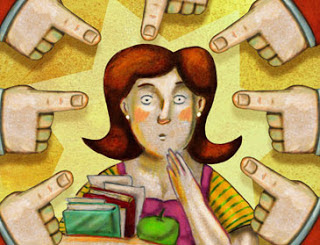 Before there was a teacher evaluation system, educators were rated on the "Unsatisfactory/Satisfactory" scale.  If a teacher received two consecutive "Unsatisfactory" ratings for incompetence, the DOE had the right to proceed with a 3020-a to terminate the teacher.  However, the burden of proof was placed upon the DOE to show that the teacher was truly incompetent.  The result was that in many cases the DOE would rather settle for a small fine and a course on pedagogy rather that go through the frustration of proving the educator was incompetent.  In a few cases it took three consecutive "unsatisfactory" ratings before the DOE actually put the teacher through the 3020-a process.  That changed in the 2007 contract as the DOE and UFT agreed to the "Peer Intervention Plus" (PIP+) that resulted in the DOE providing an "expert witness" against the teacher and with it a 90%+ termination rate.   Thanks to this blog and others the Chapter Leaders got wise to the PIP+ termination program and told the members not to take it since its a voluntary program.

For most teachers, except those with less than two classes, reassigned back to the classroom before November, or are in the ATR pool..  The teacher evaluation was imposed with the four categories of "highly effective, effective, developing, and ineffective".  Two consecutive "ineffective" ratings will allow the DOE to take the teacher into the 3020-a process with the burden of proof placed on the teacher and not the DOE, if the peer valudator finds the teacher was ineffective in the classroom.  The result is almost certain termination.

What about if the DOE decides to take a teacher into a 3020-a hearing with an "unsatisfactory"  rating followed by an "ineffective" rating?  Since there is no two consecutive "ineffectives" the burden of proof shifts back to the DOE.  This is also true if the peer valudator finds the teacher is not ineffective and the DOE is then forced to defend their "ineffective" rating.  By the way, based upon a one year data base, only 30% of the teachers were found by the peer valudators not to be ineffective!  That means that 70% of the teachers are probably toast at the 3020-a hearing.


Obviously, the DOE's Office of Legal Services can file 3020-a charges against any teacher who receives one negative rating, especially for misconduct but for incompetence cases its extremely rare for the DOE to go through the cost and effort only to get a token "award" by the Independent arbitrator without documenting a teacher improvement plan and show all the measures taken to help that teacher and that usually is a two year process. Therefore, for simple teacher incompetence cases it takes two or more consecutive "unsatisfactory" ratings or "ineffective" ratings before the DOE will file 3020-a charges.

Thanks for sharing a wonderful information and I really happy in your post. This is a good knowledge and useful post to readers. You can use this best essay writing help for any future writing works.

The funny thing is how the UFT keeps saying how teachers love the new ratings more than the old "S" or "U" ratings. However, I do not know of a single teacher at my school who prefers the new system. Then again, Mulgrew does not have to deal with it on a day to day basis anyway so why would he even care.

What if a person is brought up on charges based on one developing rating and the union looks the other way?

Tremendous absenteeism from newbie teachers. 30 teachers in the school I'm in and at least 3 out every day since the second week of school. Mondays and Fridays, it's double. The only ones who are targeted for it, are the teachers who cover that absenteeism for the DOE - the ATRs.

A Probationary Teacher can be discontinued or denied completion of probation for one developing or for al out no reason at all. Once again the union never looks the other way, those teachers are assigned Union advocates. Probationary Teachers in the UFT likely have more rights than any probationary worker on earth. Sadly, probationary workers are basically at-will employees. Luckily over the decades the UFT as either negotiated or worked through the elected legislature to get some basic rights for probationers.

We can all blame this on people like bloomberg, klein, micheel whee and all the other bozos of the establishment. Look, all this really started from our fearless president and his basketball playing partner arne duncan who was the first to implement the teacher bashing and failing schools.

Guess what...The UFT charged over $90 in dues on the next check. Why? Because we waited 6 years for that money? We have been paying dues every check, why double it?
And I hope you like giving up 60% to deductions.

Anon 1:55 is correct. You only get a teacher improvement plan and do not get 3020-a charges.

a
though you are correct with your list of reformers, all this shit started with G Bush Jr.

The UFT and Unity are very corrupt, for years they have allowed systemic age discrimination to occur because they have designed with DOE such policies.

What if you can prove at the hearing that your evaluation was tainted. Can a principal or peer validator give someone a lower score from each component of the Danielson rubric so the teacher will be rated ineffective? Can't one show through the rubric that their scores should have been rated higher?

I also want to ask....my husband who is a tenured ESL teacher in a new school. He just had his 3 informal observation, and there is only one more FORMAL observation. On the first 2 informal observation, he was rated between developing and ineffective, and on this 3rd one, he was late to school bec there was a underground tunnel signal problems on that day, and he was stuck sitting on the D train. He got to school 30 min late, and the principal was already sitting in his room. He didn't do well that day, and basically got all ineffective all for areas. Now, the Principal is saying he is on track to have an ineffective year, and will likely lead to 3020 (termination). Can the DOE terminate a teacher if he is rated ineffective this year. His last year overall score was 76, HEIDI rating, but the teaching component was 44 (1 point shy of effective in 2014-15). The principal basially is telling him "he isn't making any connnection to the kids, and he is not fit for the school, and will likely lead to 3020 termination".

The principals can write whatever they want to. Get a private lawyer and sue. The union will not be helpful