The Field Assassins Are Comimg! 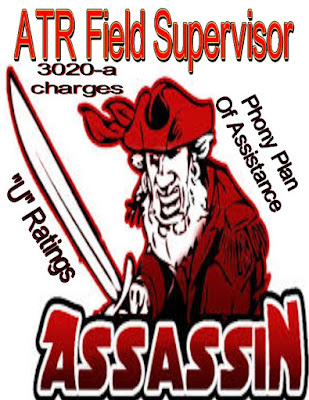 October is the time when the rotating ATRs are introduced to their field supervisors (assassins).  For the last two years the field assassins would introduce themselves with false promises to the ATR that their job was to improve their pedagogy  and get them a permanent job.  This theme worked somewhat the first year citywide when many ATRs naively took the field assassins at their word. Of course the ATRs of district 76 in Brooklyn already knew better since they were subject to the ATR field assassins the year before in what was called a "pilot program".  We now know that their job is to terminate the ATR, by any means possible!

The field assassins ask for the ATRs to prepare a lesson that conforms to "Dainelson", is Common Core based,nd has sufficient rigor.  All not required for rotating ATRs who are subject to the "Teaching for the 21st century"  (Article 8j) requirements.  The field assassins are also requiring differentiation when the ATR has no clue on the abilities of the students they have seen for the first time that day!  Some ATRs are being observed in subject areas they are not certified in so that the field assassin can  "U" rate the lesson and observation and force the hapless ATR into providing additional work in the "action plan" that is imposed upon the ATR.  This is simply a pattern of harassment to force many discouraged ATRs to resign or retire in disgust.

My advice to the ATRs is simple, demand that you be observed only in your content area and get in writing what the field assassin is looking for.  If they are asking for anything beyond what's required under "teaching for the 21st century", remind the field assassin that he or she is asking for is not within the contract.  Moreover, if they want to give you professional development, make sure they give you a real course and not read articles online or take an online course on your own time.  Require them to offer real professional development during school time.  Finally, if they continue to demand Common Core, Danielson, and rigor.  Request that they first model such a lesson so you can determine exactly wahat the field assassin wants and when they refuse, prepare a grievance showing that the field assassin refused to model a lesson for you as you requested so that you could understand whet the field assassin wanted and improve your pedagogy.  No less will do.
Posted by Chaz at 9:10 PM

How much does,a field assassin make a day? The public is entitled to know how its tax money is being spent.

Not field assassins, kindly career 'counselors there to steer ATRs into areas outside of education where they may be more suited', (all while using the term subpar as the primary adjective for ATRs) - Mike Mulgrew with Carmen Farina and Bill DiBlasio.

Not field assassins, kindly career 'counselors there to steer ATRs into areas outside of education where they may be more suited', (all while using the term subpar as the primary adjective for ATRs) - Bill DiBlasio with Carmen Farina and Mike Mulgrew . Mulgrew repeated DiBlasio's comment on his video conference advertising for ratification of the last contract. Mulgrew, Farina and DiBlasio want ATRs gone.

The biggest sham about ATR supervisors is they were administrators of failing schools......why would the UFT and the DOE allow administrators with a failing track record of leadership judge anyone? Why were they not assigned an "improvement plan"? Should I "model" my lessons to please a failed manager who obviously is in need of improvement?

Hey Mulgrew et al...Thanks alot scumbags! Hope I can do the same for you someday.


Shhhh...shut your mouth. They are listening.

You're on the money, but you just put yourself on the radar;

Not every ATR field supervisor is a assistant principal who is on payroll as an ATR Assistant Principal. There are retired supervisors in the ranks. How much are they getting paid a day? This should be brought out and to the attention of the public.

The story is the same in Newark. I was an EWP (Newark version of ATR) forced last year to teach out of my certification in an area that to my knowledge has no certification. I was rated Partially Effective and I am now under a CAP (Corrective Action Plan) to remediate my deficiencies. I am more than half way down the yellow brick road to being brought before an arbitrator on tenure charges. I fit the over 50 profile and it is not a pretty picture.

why cant the ATR's band together and file a class action lawsuit.

Kostopoulos, Stark, Quail they observe in a class that you never met before, and they rate you U. Students know they will not face any consequences for not doing the work. These people cannot teach themselves, but they expect an ATR to teach a class like they had the students for 2 months. Please expose these supervisors

I am sure they are getting orders to go after teachers over 50, and the UFT is aware of it that is why ATRs are second class citizens with due process diminished.