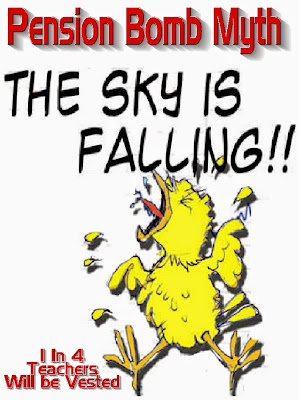 Despite the news media occasionally writing articles on how our generous benefits will bankrupt the NYS pension system, the sky is not falling and our pension system is doing just fine thank you.  The truth is that the New York State pension is doing quite well and compares very favorably with other state pensions.  Both in funding and in benefits.  Moreover, unlike a dozen or so states, like California and most of New England,  New York State employees also are eligible for Social Security benefits.  Even for the latest Tier VI pension, the maximum employee contribution of 6% is still low, only a little over half of what the local and or State government must contribute  (11.72%, down from 17.23% the year before)  to keep the pension system solvent.  During the recession, the NYS pension was in trouble as local and State government had to contribute over 20%, compared to less than 3% by the employee. However, the State was smart enough to ensure the pension plan was funded and the stock market has recovered nicely.   Presently, the average NYS employee contribution is still a low 3.3% (all tiers) while the national average is 7.4% and the total contribution is one of the lowest in the nation..

Our pension is considered "well funded" and unlike New Jersey and Connecticut,  there is no major potential shortfall that requires major action to correct and may reduce future pensions. Compared to the rest of the nation, New York State has done a good job keeping their pension promises to their employees.  No, the sky is not falling when it comes to our pension system.

You can read the latest example of the media scare tactics Here.

Below is a list of all 50 states and their  employee and employee pension contributions.

You're right, I thank goodness for a good pension system. Fred Klonsky, a retired teacher from Chicago, blogs about Illinois pensions and the troubles they have (as well as ed issues). https://preaprez.wordpress.com

I plan to retire at 55 with only 17 years in (to save my soul from the corruption of the DOE)!
Later I can take social security, and only the fact that I can have both makes my dream possible. Oh, that and some rental properties, that every smart teacher should acquire in their careers.

Mayor Juliani tried several times to get his hands on the pension funds. He kept calling for a constitutional convention. The constitution guarantees pensions in NY State and this really annoyed him. That is why it is important for teachers to vote "no" when the voting to allow a state constitutional takes place next year. Also, be sure to elect the UFT candidates for pension fund trustees.

Do we think Cuomo and the other pols in Albany would support the Constitutional convention?

Is our union, known for its poor choices, capable of going along with this idea. Sometimes I think they only work for the retirees, so hopefully they wil lfight for our pensions.