What Is The Average NYC Educator Pension Last Year? 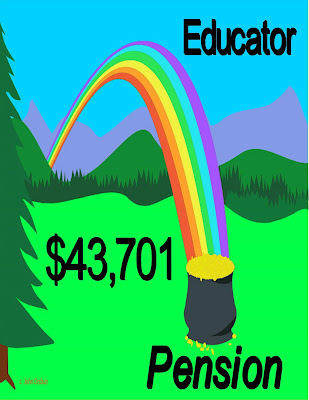 The average educator pension for all New York City retirees in 2016 was $43,701.  Not bad but not a windfall by any means.   However, if you read the Daily News headline, the newspaper makes it seem that the average pension for educators is $88,000.  Of course, inside the article you find out that their definition of "average" is much different than everybody else s.

Obviously, this is the newspaper's opening salvo on educator pensions as the Constitutional Convention is discussed and this may be one of the issues brought up.  Once again the Daily News is practicing questionable journalism in their quest to demonize teachers and their benefits.
Posted by Chaz at 12:15 PM

Honestly- that figure seems low. One of my co-workers was told at a pension consult that she'll collect $67,500- she'll have 25 years at age 60 (a lot of her time transferred over from another city agency). Another (who will have 30 years at 55) was told $70K. All I can assume is that a lot of people are escaping the system early.

Thanks very much for writing this. I knew that number sounded fishy.

Not everybody lasts 25 to 30 years. Many leave after 20 as they can't wait to leave.

I will probably leave after 6 years of teaching. It's not voluntarily but because of Politics and the misuse of the Danielson Rubric.

I am leaving at 56/20 yrs and was told by a consultant that I will get about $36,500. Federal tax only...I don't give a damn I'm out. Im no longer an educator--Im a victim of work place bullying. I wish l could hang on to meet the 25 year requirement but my sanity is worth more than some dollars.

I'm afraid the consultant is wrong. If you take a pension at 56, you are subject to an age correction factor of 0.73 and your pension would probably be more like $28,000

I will take that too...maybe i should get out of the 55/25 program. You know it's whatever...I'm leaving because there are no allies at my school only moles,other bullied and the warnouters

Chaz, the reduction at age 56 is 24% so it would be .76. Please stop giving pension advise and refer people to the UFT pension consultants at their local borough office

is there any pension if i leave after 10 years at age 36? or 15 years of service at age41? Thank you for any input or advice.

The Daily News and the NY Post deal in what is referred today as 'fake news'.

You are correct at 56 the age reduction factor is 0.76 and is reduced by 24%. However, that was a simple and minor mistake on my part. Unfortunately, the UFT fails to reach out to their members and my blog provides valuable information that the union does not seem to think are important. Your suggestion is noted and thrown in the trash where it belongs.

Finally, many members do not have the time to go to the Borough Office after school to have a meeting with a pension consultant. Did you ever think of that?

If I have 30 yrs at age 52 [I am Tier 4] and retire, will I get full unreduced pension when I turn 55? I can support myself through other means from 52-55. Or do I somehow get punished for retiring at 52 even if I don't collect pension until I am 55?

What is your understanding on this I would appreciate your response!

But there are hundreds of cases with retired NYC teachers-not supervisors--that are in Tier 1--and they retired within the last 10 years--they are collecting well over 100kin pension. Although, that is not the norm, they did play by the rules of Tier 1 and people do deserve an adequate pension, it's still not good for public relations--when any public employee earns a pension that is significantly more than their last earned annual salary.

Yes, you can wait till your 55 and get a full pension and retiree health benefits.

Let's hope they do not target you. They really are doing everything so teachers do not stay long.

To Chaz at 413Pm. You have given out other erroneous pension advice in the past, like talking about a non existent Tier 5 for NYC teachers. Your comparison of Tier 6 to Tier 4 used faulty FAS.

Unless you are a trained pension consultant, you should not be giving out advice. I find that hard to believe that people cant give up one afternoon in a year to have a consultation.

Members can also call any borough office and leave a message. Since we work all day in school buildings and then come to the office, once we are done serving our members with appointments, we return those phone calls. We also have consultants available at UFT central from 10 -6 everyday to help our members.

You are a very bright individual with some very strong concerns, and I respect that. I just don't want you leading people into poor decisions that might affect the rest of thier lives when it comes to their retirement. Thank you for lettimg me respond

I guess I'm one of the lucky ones after reading all these terrifying comments. My situation is 6 more years till I hit 55. I started young so I will have 32 years at 55. Also with the new contract maxing out next June, I will make three consecutive years at 120K. Throw my per session on top and I'm looking at about 63% of 140K at that point. $85,000.00 pension I shall take it!!!!

Chaz, as the previous commenter mentioned , is there any pension at all for someone who's worked 15 years and who's 44 years of age? I'd really like to know this information as well.

Chaz, if you worked for another city in NY as a government employee at their city hall for say 3 years, would you be able to teach in the DOE for 27 years and still have a full 30? It counted towards me getting vested 3 years early, so I stopped paying into retirement after 7 years at the DOE. Does that mean the time automatically counts or do I need to do some sort of buyback? Thanks!

Chaz don't stop posting about pensions and retirement. Explaining to all of us on how it all works . I can tell you personally most Uft members in my school are clueless to what they get or penalized . When I started reading your blog , I got educated on it all . I thank you .
Sully

to anon7:10 pm - the UFT provides pension speakers who will come to a school and do a short presentation and then they usually sit and answer questions. A principal can't prevent it.

You folks saying that the only deduction is Federal tax need to keep in mind that you have to pay for your medical plan if you choose to stay with what you have. Plus the UFT handles prescriptions, dental and eyeglasses so you need to stay as a member and pay retiree dues. Of course you can get any coverage from any provider you like.

No Tier V for teachers? Really now. Read this.

My FAS comparison is not faulty.

If you were part of the Employees Retirement System then the answer is yes. If not, the answer is no. However, to be fair it might be to your benefit to contact TRS and ask them for a written determination.

No pension until you turn 55 years of age.

Thanks Chaz, your great!

Thank you Chaz! I have learned so much from your blog posts!